“I think that’s best left to the locales and states,” DeVos answered at her confirmation hearing Tuesday in the Senate Health, Education, Labor and Pensions Committee.

Murphy, who represented a congressional district that includes Newtown before he was elected to the Senate, pressed on, asking DeVos if she would back Trump in his aim to eliminate gun-free zones.

“I will support what the President-elect does,” DeVos said.

Murphy, a member of the HELP Committee also asked the nominee if she would support the accountability measures in a new federal law, the Every Student Succeeds Act.

DeVos said she would.

“I think accountability is highly important,” she said.

DeVos faced tough grilling by all Democrats on the HELP panel, while Republicans on the committee repeatedly said she would be an excellent secretary of education

“Betsy DeVos is on our children’s side,” said HELP Committee Chairman Lamar Alexander, R-Tenn. “I believe she’s in the mainstream of public opinion and her critics are not.”

DeVos, 59, is a former Republican Party chairwoman in Michigan and chair of the pro-school-choice advocacy group American Federation for Children, or AFC, which has been funded by her family.

A board member of the AFC, former Connecticut Sen. Joe Lieberman – and Sen. Tim Scott, R-S.C. – introduced DeVos to the committee.

Lieberman said he knew “some people are questioning her qualifications” for the job and as an “outsider” who has never worked for the “education establishment.”

“Today that’s one of the best qualifications you can have,” Lieberman said.

Lieberman said DeVos is “disciplined, organized and knows how to set goals.”

DeVos is a strong proponent of charter schools and vouchers, and unlike her predecessors in the Obama administration, she does not believe the federal government can make education better.

“President-elect Trump and I know it won’t be Washington, D.C., that unlocks our nation’s potential, nor a bigger bureaucracy, tougher mandates or a federal agency,” DeVos said. “The answer is local control and listening to parents, students and teachers.”

Several Democrats objected to Alexander’s decision to allow each senator on the panel only five minutes to question DeVos.

“What are Republicans trying to hide by shutting down #DeVosHearing after just 2 hrs of questions? Tillerson hearing went all day,” Murphy tweeted during the hearing. 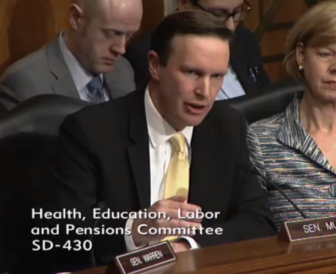 DeVos has been involved in the establishment of charter schools in Michigan, most of which have recorded student test scores in reading and math below the state average.

“If confirmed I will be a strong advocate for public schools,” DeVos said.”But if a school is troubled, or unsafe, or not a good fit for a child — perhaps they have a special need that is going unmet — we should support a parent’s right to enroll their child in a high-quality alternative.”

She is a prominent GOP donor and is the daughter-in-law of billionaire Richard DeVos, the co-founder of Amway.

Ranking Democratic Sen. Patty Murray, D-Wash., slammed DeVos for failing to turn in an ethics questionnaire before her confirmation hearing and for not responding to calls to release three years of tax returns.

Murray said there was a need for the Senate to know about DeVos’ “extensive financial entanglements and possible conflicts of interest.”

“Do you support companies and individuals profiting from public education?” Murphy asked.

DeVos answered, “I think what is important is the outcome.”

After DeVos said she did not know how much her family gave to Republican candidates, Sen. Bernie Sanders, I-Vt., asked the nominee if it could be as much as $200 million.

The nominee also that if confirmed she would take a salary of only $1 “to make it official.”

DeVos’ support of charter schools and vouchers that would allow low-income parents pay for private school, often diverting money from public schools, has drawn fire from the nation’s teachers unions.

“Betsy DeVos, who has spent decades working to dismantle public education and privatize public schools, is dangerously unqualified and lacks the experience we should all demand in America’s secretary of education,” said National Education Association President Lily Eskelsen García. “If confirmed, she would become the first secretary of education with zero experience with public schools.”

The HELP committee hopes to vote on her nomination next Tuesday.