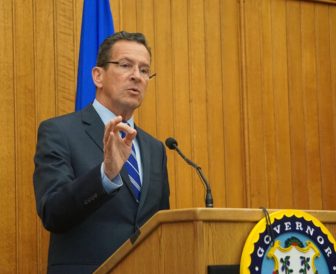 Gov. Dannel P. Malloy is urging critics of his plan to shift $400 million in teacher pension costs onto municipalities to reserve judgment until they see his entire biennial budget proposal.

That shift is part of a much larger plan not only to close a significant projected state deficit, but also to address long-ignored inequities in municipal funding — inequities that have failed public school students in Connecticut’s poorest communities, Malloy said Friday.

And while the governor will present his full, two-year budget to legislators on Wednesday, he is expected to release more details today involving aid to communities.

“This is part of a larger budget with direct implications on how we fund a number of state services as well as how we support our local communities,” the governor told Capitol reporters during a Friday briefing. “This is a budget that is unlike any other budget that has been proposed in recent times. … We’ll present other opportunities, including on Wednesday, to understand the budget in its full context.”

Despite keeping some of his budget cards close to the chest, the Democratic governor has been emphasizing several principles since November that would drive his next state spending plan:

Malloy said he is taking very seriously the September decision of Hartford Superior Court Judge Thomas P. Moukawsher, who found the state’s method of distributing education funding to be irrational and unconstitutional.

Connecticut has too many students in “large pockets of poverty,” and “we are failing a substantial portion of that population,” Malloy said. “We’ve been told. We’ve been warned. I agree with that warning. I’m trying to do something about it.” 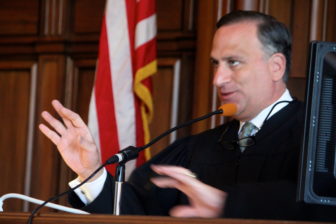 The administration is recommending that cities and towns cover nearly one-third of Connecticut’s annual contribution to the pension fund for municipal school teachers.

This would amount to $407 million of the $1.29 billion contribution in the upcoming fiscal year. Currently, cities and towns pay nothing toward this benefit.

And while the state spends far more proportionately on teacher pensions in affluent communities — which can afford to hire more instructors at better pay — the governor’s plan still would bill all municipalities for one-third of pension costs.

“The unintended consequence could be that cities and towns cut their education spending to pay for this cut from the state,” said Mark Waxenburg, the executive director of the Connecticut Education Association, the state’s largest teachers’ union. “We worry this will find its way into cuts in the classroom.”

“Such a colossal cost transfer – even given the current fiscal realities and the need to look at all areas of state and local spending — only reinforces the urgency to address the structural changes needed to give municipalities new tools for revenue diversification to keep in line with the overwhelming number of other states,” said Joe DeLong, executive director of the Connecticut Conference of Municipalities.

But Malloy hinted strongly Friday that his budget would do more than bill communities for $407 million.

While some of those resources are expected to be used to close an anticipated deficit topping $1.4 billion in state finances next fiscal year, another portion presumably would be funneled back into enhanced aid for poor communities.

In other words, after pension billing and new municipal aid systems are weighed together, some communities would come out ahead and others would lose ground.