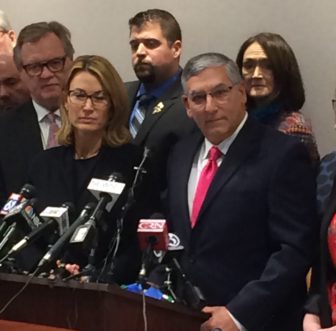 Republicans in the state House and Senate and Gov. Dannel P. Malloy both released proposals Tuesday to release stalled municipal aid that local officials hoped to receive this fiscal year.

And Republican leaders also charged that their Democratic counterparts withdrew support at the last minute from a plan to restore education grants — and to close a small budget deficit as projected by nonpartisan analysts.

Democratic legislative leaders countered that the GOP plan still needed adjustments and that Republican leaders went “rushing into a press conference” rather than continuing bipartisan talks.

“We want to be bipartisan if that is an option,” House Minority Leader Themis Klarides, R-Derby said during a late morning press conference in the Legislative Office Building. “We all could have been standing here today moving the state of Connecticut forward.”

Klarides said Republicans approached Democrats one month ago with a plan to restore a major portion of Education Cost Sharing and Local Capital Improvement Program (LoCIP) grants that were reduced earlier this winter.

“We thought they (Democrats) were going to be on board,… but at the last second, yesterday, they said ‘no,’” Senate Republican President Pro Tem Len Fasano of North Haven said, adding Democratic leaders offered no explanation.

But Democratic leaders disagreed with the Republicans’ version of the story.

“Responsible governing is about defining priorities and moving resolutely to address them,” Senate President Pro Tem Martin M. Looney, D-New Haven said. “We offered to continue to meet in order to bridge the gap. The Republicans instead chose to hold a press conference and play politics as usual, much as they did last week on the pension refinance bill. Rather than rushing into a press conference without details or consensus, we intend to meet with the members of our caucus on Wednesday to discuss the issue in hope to move from there to a bipartisan consensus.”

House Speaker Joe Aresimowicz, D-Berlin, called the GOP plan “potentially a workable idea, but the details still need to be fully assessed. With the current budget year in balance, making a minor adjustment to avoid these cuts is certainly worth looking at. We offered to sit down to go over their proposal, but were told an announcement was already set. I’m still willing to meet and govern together.”

At issue are two local grant programs that faced cutbacks in late December.

Malloy reduced education grants by $20 million to fulfill a legislative directive in the budget to reduce overall local aid by that amount. Such savings targets are controversial because, while the legislature has promised to provide towns with cost-saving ideas to offset those reductions, it has not provided them.

And $30 million was withheld from LoCIP, which reimburses communities for work on roads, bridges, sidewalks, municipal government and recreational facilities, and smaller economic development projects.

Republican legislative leaders released a plan Tuesday to restore $18.9 million of the education grant funds and to close the $11.9 million General Fund deficit projected by the legislature’s nonpartisan Office of Fiscal Analysis.

(The Malloy administration projects a small surplus of $23.3 million. Both projects represent a small fraction of 1 percent of the General Fund.)

The plan would draw $17 million from a reserve account used to fund state employee raises. Legislators and the governor are hoping outstanding contracts with about a dozen state employee unions can be resolved without pay increases.

The other $14 million needed for the Republican plan would come from a series of line-item cuts — most 5 percent or less — from a wide array of agency budgets.

Many of the cuts were aimed at department accounts used to fund consulting contracts and other private-sector work.

Connecticut reimburses communities for a portion of these projects’ costs using a pool of borrowed funds established many years ago.

But since 2004, legislatures and governors have been adding annually to the LoCIP pool, while sometimes drawing larger amounts out to pay for local projects.

But while the current budget was enacted in May, and the fiscal year began July 1, state government notified local officials on Dec. 29 — halfway into the fiscal year and with the busy spring construction season still ahead — that LoCIP funding essentially had dried up.

This would provide sufficient resources, McClure said, both to cover the delayed funding owed this year and to maintain the LoCIP program in each of the next two fiscal years.

Fasano questioned Tuesday why Malloy didn’t propose this additional borrowing one year ago, in time to prevent any delays to cities and towns.

“If he wanted to do that, certainly we would have entertained that,” the GOP leader said.

The administration has countered that Republican leaders and any other legislators could have proposed and enacted bills last year to bolster the LoCIP pool.

“It’s laughable that Republicans now want to spend every last nickel in the current year budget, even with a very small projected surplus,” McClure said. “If Connecticut Republicans were actually fiscally responsible, they would put any surplus into the Rainy Day Fund at year’s end. … All of this from legislators who said the current year budget spent too much. This isn’t a serious proposal; it’s an attempt to pander and get headlines.”

Litchfield First Selectman Leo Paul, president of the Connecticut Council of Small Towns, said one of the biggest problems local officials face involves cuts in state assistance that arrive after the fiscal year has begun.

Though municipal officials don’t want to see state funding reduced, “We would just like to know what the legislature plans to do, and then we can deal with it,” he said.

Joe DeLong, executive director of the Connecticut Conference of Municipalities, said, “CCM is appreciative of the efforts to restore these cuts and remains committed to working with our legislative leaders to ensure municipal funding remains adequate to provide needed local services.”