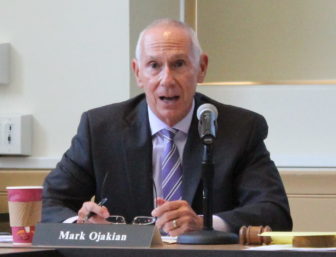 The president of the state’s largest public college system said Wednesday tuition increases spread over the next two years are necessary to help close a budget gap of about $92 million over that time while still giving students the ability to handle and plan for future costs.

“It’s responsive to the need to raise revenue into the system and responsive to the students who have seen much greater increases over the years,” Connecticut State Colleges and Universities President Mark Ojakian said.

A tuition and fee package approved unanimously Wednesday by the finance committee of CSCU’s governing board, the Board of Regents, would increase in-state tuition in each of the next two school years by 4 percent at the four regional state universities and by 2.5 percent at the state’s 12 community colleges. Out-of-state tuition would remain unchanged.

With the finance committee’s favorable recommendation, the package is expected to be approved by the full Board of Regents at a meeting on April 6.

The tuition increases are expected to generate $15.3 million in additional revenue in the next fiscal year – $11.5 million coming from the Connecticut State Universities and $3.8 million from the community colleges, CSCU budget chief Erika Steiner said. Changes to several programmatic fees will bring in an additional $5 million, she added.

This would close a little over half of the system’s projected budget $35 million deficit in the 2018 fiscal year. The deficit is expected to grow to $57 million in the following year.

Ojakian has said on multiple occasions he does not plan to balance the system’s budget “on the backs of students,” but said Wednesday tuition “always has to be part of the conversation.”

What makes this tuition proposal different, he said, is the two-year time frame and relatively smaller increases in tuition. Steiner said CSCU decided to try a multi-year tuition model based on its success at the University of Connecticut. UConn passed a four-year tuition plan in December 2015.

Ojakian said this model would allow students to plan for the cost of attendance more effectively than if the system continued to evaluate tuition increases annually. Over the past eight years, annual tuition increases have ranged from 2.5 percent to more than 10 percent at the CSUs, and from 3 percent to nearly 8 percent at the community colleges. Steiner described it as “erratic.”

But while the tuition hikes would be locked in for the next two years, it would not prevent the board from adjusting it to an even higher percentage if it is deemed necessary – a point finance committee chairman Richard J. Balducci raised toward the end of the meeting. 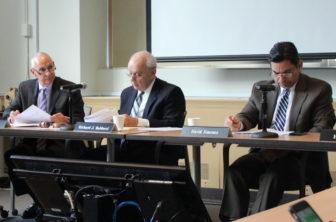 “It’s not my intention to bring forward any modifications to the tuition schedule next year,” Ojakian said. “But we don’t want to not allow the board to have any sort of flexibility that they choose to have, should they want to revisit this.”

Fees that accompany laboratory and studio courses would be eliminated and replaced with new fees that could be applied more broadly. These fees, called supplemental course fees, would cost students who take those specialized courses an additional $100 to $300 per course, depending on its classification.

Unlike the two-year tuition plan, these fee increases are only for the next fiscal year and are expected to be revisited – and potentially increased – the following year.

It also calls for a new $20 per semester fee that would give students unlimited access to public bus and rail transit in the state, though students at Eastern Connecticut State University, Quinebaug Valley Community College and Northwestern Connecticut Community College would be exempt from the fee because their campuses are not serviced by the state’s public transit system. 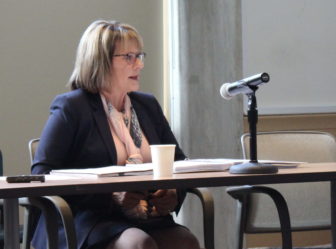 When asked whether these increases – particularly in the context of tuition doubling over the past 12 years – threaten the affordability and accessibility of the system, Ojakian said the system’s budgetary challenge necessitated some increases.

“Now while that may be a hardship for many, I think this is a responsible increase, which recognizes the struggles that everyday families have with higher education costs,” Ojakian said.

Ojakian said the rising cost of fringe benefits has contributed significantly to the budget gap. He also said he anticipates having to pay for wage increases at some point even if the governor is able to achieve the $700 million in concessions from unionized state employees he is seeking in his budget.

Further complicating matters is a proposed $14.3 million in state funding cuts, which would be accompanied by cuts to the additional state appropriation that covers some of the cost of fringe benefits. In a presentation to legislators earlier this month, both CSCU and UConn officials cited fringe benefits as their largest cost drivers.

The package only proposes increasing tuition on in-state students, Steiner said, because increases to out-of-state tuition would make the system’s schools less competitive on a regional level.

Steiner also asked the board to consider “unbanding” tuition in the 2018-19 academic year, which would allow the system’s institutions to continue charging per credit after a student enrolls in 12 or more credits. The current system charges a flat tuition rate for enrollment between 12 and 17 credits.

She said there has been some pushback to the idea, especially from those who are encouraging students to enroll in 15 credits each semester – which is necessary to graduate on time. However, Steiner said, the proposal could generate between $4.5 million and $5 million in additional revenue annually.