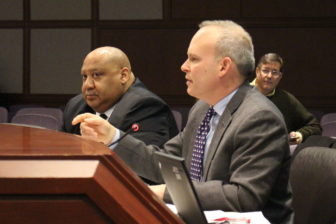 Coupled with recent reductions in the share of costs borne by state funding, these rising expenses left the University of Connecticut and the Connecticut State Colleges and Universities system with few other options to generate the revenue necessary to stave off deep budgetary cuts, the officials said.

“We fully understand the state’s under a lot of pressure, especially on fringe benefits,” said Scott Jordan, the University of Connecticut’s budget chief. “As a state agency, we’re feeling the cost of fringes and retirement costs. We know that you’re facing that statewide as well, and we recognize that.”

“But when we’re talking about what the trends are, and what the impacts are on the university and tuition, we have to recognize that decreased state funding does – and increasing enrollment at the university does – mean increased costs at the university that need to be paid by university sources, and that includes tuition and fees,” Jordan added.

For the first time, tuition has become UConn’s largest source of revenue this fiscal year, surpassing state support. And the university is set to raise tuition again in each of the next three academic years.

The schools in the CSCU system have seen significant tuition increases since the start of the Great Recession as well. The four regional state universities have increased in-state tuition by 40.4 percent while the state’s community colleges have increased it by 39.7 percent. 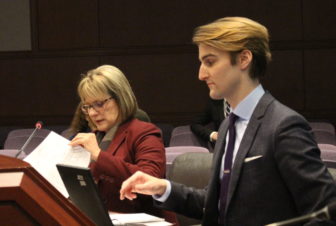 Erika Steiner, CSCU’s budget chief, looks through her presentation notes after being asked a question during Friday’s forum. At right is Sean Bradbury, CSCU director of governmental relations.

As tuition has increased, both university systems have grappled with significant changes to their enrollment numbers. For UConn, that has meant addressing the costs associated with housing and teaching larger freshman classes each year as part of the Next Generation Connecticut initiative.

But for CSCU, the number of students enrolled has been in a consistent decline, down 22 percent from its peak in 2011. The decline means fewer students are paying tuition, thus reducing revenue.

Erika Steiner, CSCU’s budget chief, said she is afraid that trend will continue.

“Statistics show that when employment improves, attendance goes down,” Steiner said, explaining the decline in enrollment. “And that’s particularly true with community colleges.”

“What we’re facing is projections that suggest that high school graduates will continue to decrease in numbers in the next several decades in Connecticut and also in New England in general. And as a reminder, 96 percent of our students are from Connecticut. So when the Connecticut high school graduation rate declines, our enrollment declines as well,” Steiner added.

As has been the case across nearly all state agencies, growth in the cost of fringe benefits has become a budget challenge for both college systems.

Stafford Peat, a senior policy consultant for the New England Board of Higher Education, said a recent analysis singles out fringe benefit costs as a major obstacle.

“The salaries have been relatively stable, but what’s really gone up are the fringe benefits, especially the health care costs,” Peat said.

At UConn, fringe benefit costs have increased from $148.3 million in the 2011 fiscal year to $250.9 million in the current fiscal year – a sizable portion of the university’s $1.3 billion budget. Of that, $56.1 million of it is to make up for decades of state underfunding of the state employees pension system, Jordan said.

CSCU faces similar challenges, Steiner said. The system has seen fringe benefit costs increase about 4 percent annually, and the total cost accounts for about 28 percent of the system’s $1.2 billion budget. 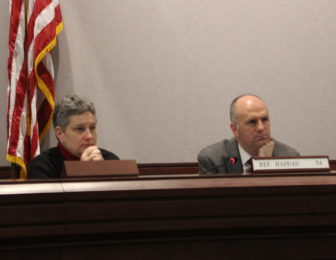 Only about one-half of UConn employees are enrolled in the state employee retirement plan, which Rep. Gregg Haddad, D-Mansfield, said is significantly lower than at most other state agencies. The others are enrolled in defined contribution plans, which Haddad found surprisingly less efficient at the university compared to the state plan.

The consequences of higher fringe benefit rates extend beyond budgets. It is beginning to affect UConn’s ability to win research grants, because the fringe rates are “substantially higher” than those of some of the university’s competitors, Jordan said.

Right now, the university is paying $44 million in salaries and $14 million in fringe benefits through research grants.

“There is increasing anxiety from among the research community that, through this fringe rate, we’re going to be pricing ourselves out of our research grants,” Jordan said.

Both financial officers also pointed to rising employee salaries as a source of difficulty.

Employees went two years without salary increases after the 2011 SEBAC agreement but have received raises in the years since at both university systems.

In addition, UConn has added 200 faculty members since the 2011 fiscal year – many as part of the Next Generation Connecticut initiative – as well as 84 other staff positions, which has resulted in some additional costs, Jordan said.

But, he said, the collective bargaining agreements reached between UConn and its faculty and professional staff unions have cost the university $68 million more in annual salary expenses since the 2011 fiscal year. Employees were given 5 percent raises in each of the three years after the two-year salary freeze ended.

“The truth is, that has been hard for the university,” Jordan said. “We, of course, value our employees. We don’t begrudge them.”

Steiner said CSCU’s full-time employee salaries have typically increased between 3 and 5 percent every year since 2013, and account for about 49 percent of the system’s budget.

Other cost factors linger too

Candace Williams, associate director of policy and research for the New England Board of Higher Education, said two hidden cost drivers are not on the radar of university administrators, but should be: maintenance costs for newly constructed buildings and student attrition. 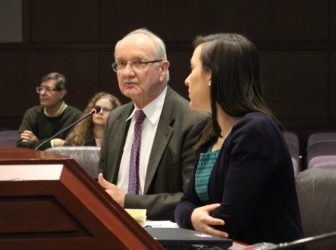 Stafford Peat, a senior policy consultant for the New England Board of Higher Education, left, and Candace Williams, the organization’s associate director of policy and research.

Williams said that while newly constructed buildings on campus are usually more energy efficient, they also tend to have higher maintenance costs.

Sen. Beth Bye, D-West Hartford, said this is especially concerning because universities in the state have participated in what she called an “arms race” in constructing new buildings.

“College presidents, they are measured on, oftentimes, just two criteria: the amount of money they bring into the college or university and the number of buildings they’re able to construct,” Peat said. “But once again, looking down the road, there’s a cost associated with that construction.”

Williams also estimated that 20 percent of education and related costs can be attributed to students who do not graduate on time, as universities continue to subsidize their educations through the fifth and sixth years – sometimes even longer.

CORRECTION: An earlier version of this story incorrectly stated that Rep. Gregg Haddad found UConn’s alternative retirement plan to be more efficient than the state plan. He found it to be less efficient.