Connecticut is not alone in its budget woes, but does have less margin for error in dealing with them than other states do, according to new reports from two nationally recognized policy think-tanks.

Two-thirds of states are dealing with projected revenue shortfalls in this fiscal year, the next, or both, according to the progressive Center on Budget and Policy Priorities, based in Washington, D.C.

But with less than $240 million in its Rainy Day Fund, Connecticut’s budget reserve represents just 1.4 percent of its General Fund. Only five states have a smaller cushion, according to a recent analysis by The Pew Charitable Trusts.

“During times of economic growth, states can be reasonably confident that the tax collections upon which they base their budgets will come in as predicted,” CBPP analysts Elizabeth McNichol and Samantha Waxman wrote in a recent analysis. “This year is different, however.” 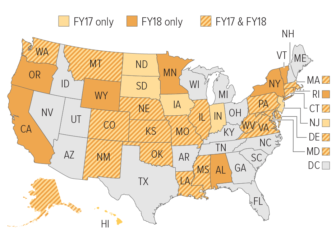 Both the Connecticut legislature’s nonpartisan Office of Fiscal Analysis and state Comptroller Kevin P. Lembo say state finances are on pace to finish this fiscal year about $45 million in the red — a small gap equal to about one-quarter of 1 percent of the General Fund. The chief reason behind that projected deficit, both say, is lower-than-anticipated state income tax receipts.

A much bigger gap looms here in 2017-18. Finances, unless adjusted, will run more than $1.4 billion in deficit, nonpartisan analysts say, while Gov. Dannel P. Malloy’s administration pegs the potential shortfall at $1.7 billion. Both gaps are close to 8 percent of the General Fund.

Both deficit forecasts for the next fiscal year reflect a combination of eroding income and sales tax receipts as well as surging retirement benefit and other debt costs.

Connecticut is one of 19 states whose revenues are expected to come up short both this fiscal year and next, according to the center.

In addition, another six states are facing shortfalls this fiscal year alone, and eight others anticipate such problems just in 2017-18.

Why are 33 states nationwide struggling with red ink?

The center identified four trends, two of which are challenges here in Connecticut.

Modest Stock Market Growth. Starting in late 2015 and the beginning of 2016, market growth limited income tax collections in Connecticut and in other states. And while market growth accelerated late in 2016, “income tax collections are now lagging expectations as wealthy taxpayers appear to be postponing selling stocks and other assets in the hope that President Trump and Congress will cut capital gains tax rates,” McNichol and Waxman wrote.

With less than three months left in 2016-17, analysts now say the income taxes will have produced $9.4 billion by fiscal year’s end.

Slower-than-average sales tax collections. “Despite the economic recovery, sales tax collections are below their historical average as consumers have remained cautious long after the end of the recession and untaxed Internet sales have continued to grow,” the center’s report states.

Like projections for the Connecticut income tax, the sales tax was expected — two years ago — to yield nearly $4.4 billion in 2016-17, while actual receipts are on pace to finish $130 million below that mark.

Falling Energy Prices. This is chiefly a problem in states with energy-based economies, such as Alaska, Louisiana, Oklahoma and West Virginia. These states have watched energy-related tax receipts fall since oil prices began to drop in 2014, McNichol and Waxman wrote.

Tax Cuts. Eleven states have enacted large, phased-in cuts dating back to 2011 as they began to recover from The Great Recession. Connecticut has reduced some taxes, but has not ordered any major tax reductions over the past six years.

Federal grants to states — which make up approximately 31 percent of state budgets — are at risk of being cut based on proposals from President Trump and congressional Republicans, though at this stage in the federal budget process it is unclear how deep these cuts may be.

Using data from the National Association of State Budget Officers, The Pew Charitable Trusts found that 40 states had larger emergency reserves than Connecticut does as a percentage of their respective general funds for 2017.

While Connecticut’s reserve represents 1.4 percent of its General Fund, percentages in those 40 states ranged from 1.7 percent in Wisconsin to 100 percent in Wyoming. Thirty-one states had reserves between 2 and 10 percent.

Connecticut ranked second-lowest among states with any reserve. Pennsylvania has a reserve equal to 0.2 percent of its General Fund while Illinois, Nevada, New Jersey, and North Dakota have none.

Data for five states — Arkansas, Georgia, Kansas, Montana and Oklahoma — was not available.