A divided legislature flubs a dress rehearsal on the budget 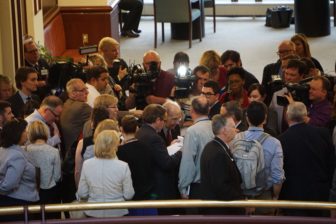 Reporters and lobbyists surround Senate President Pro Tem Martin Looney and other Democrats after the Appropriations Committee adjourned without a budget vote.

Connecticut saw a preview Tuesday of what a fiscal deadlock looks like in a closely divided General Assembly: A fragile Democratic majority unable to unite behind a spending plan, and a Republican minority unwilling to step into the void and share responsibility for a budget destined to be poison at the polls in 2018.

With an eye on upcoming campaigns for governor and the legislature, leaders of the two parties blamed each other for the failure of the Appropriations Committee to vote on a spending plan, as well as the expectation that the Finance, Revenue and Bonding Committee won’t even attempt a vote on a tax package before its deadline Friday.

The fight left unanswered a key question: How will the General Assembly agree by its constitutional adjournment deadline of midnight June 7, or at least by the start of the new fiscal year on July 1, on an unpalatable mix of spending cuts and new revenue to close a shortfall of about $1.7 billion in an annual budget of $20 billion?

To pass a budget in the evenly divided Senate, Democrats need the unanimous agreement of their 18 members, plus the tie-breaking vote of Lt. Gov. Nancy Wyman. In the 151-seat House, Democrats can afford no more more than four defections in a caucus that has five members who voted with Republicans against the budget last year.

Democrats, who have seen their ranks shrink in successive elections, would like nothing more than to share responsibility with the GOP for whatever budget is produced. Republicans, who are building their 2018 campaigns around what they say are the Democrats’ failed fiscal policies, have no desire to muddy that message by passing a bipartisan budget.

After the Appropriations Committee abruptly adjourned without a vote Tuesday afternoon, the leaders of the caucuses raced to establish a political narrative. 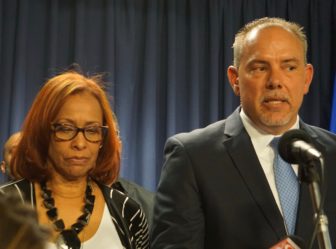 The leadership of the House Democratic majority — Speaker Joe Aresimowicz of Berlin, Majority Leader Matt Ritter of Hartford and their Appropriations co-chair, Rep. Toni Walker of New Haven — accused Republicans of working in committee to shape the spending plan, then turning on their own work by refusing to cast votes in committee to send it to the floor.

“At the very last minute,’ Aresimowicz said, “they pull the rug out from under your feet and say, ‘We’re off the package. We’re not going to vote for it. This is now going to become your product.’ And it’s not our product. It’s a product of bipartisan negotiations.”

Walker said, “It was not a Democratic budget; it was a negotiated budget.”

“I’m going to drag them kicking and screaming, if I have to, to the table,” Aresimowicz said. “Ultimately, they’ll have to explain to the residents of Connecticut and the voters why they begged for a seat at the table for so long and have squandered it and decided not to participate.”

The GOP leaders, Sen. Len Fasano of North Haven and Rep. Themis Klarides of Derby, said the Democrats’ were so willfully disingenuous that budget negotiations with Aresimowicz may be impossible.

“The comments that he just gave are simply outrageous,” Fasano said. “The comments by Walker are simply absurd. And the whole characterization of blaming it on us, when they are totally inept, just makes me angry.”

Klarides said the Democrats still hold a tenuous majority, but they are panicking at their inability to find the votes for a budget.

Both sides are open to claims of being disingenuous: Democrats shouldn’t be shocked by the unwillingness of the GOP to cede a political advantage for 2018 by working on a bipartisan budget; while Republicans will have trouble pronouncing themselves superior on fiscal policy if they abstain from shaping the final budget.

By holding a narrow majority, Democrats essentially are first in line to attempt passage of a balanced budget. But if Democrats cannot agree on a plan, Republicans will have to explain to voters why they do not attempt to govern by crafting a budget capable of attracting a handful of Democratic votes. 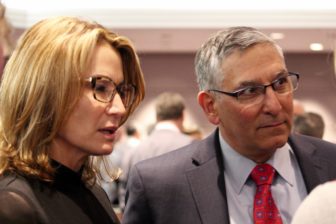 If they have a superior approach to budgeting, why not try it now?

In the Senate, Fasano needs to win over only one of three fiscally conservative Democrats: Joan Hartley of Waterbury, who voted against the budget last year, Paul Doyle of Wethersfield or Gayle Slossberg of Milford.

In the House, Klarides could pass a GOP budget with just four Democratic votes. Five of the eight House Democrats who voted against the budget last year won re-election and would be a natural starting point should Klarides wish to take control of the budget debate.

Fasano and Klarides said they intend to release a GOP alternative budget by week’s end, but they acknowledge making no effort to win over Democrats.

Aresimowicz said the legislature now will examine the GOP proposal.

Earlier Tuesday, Joe DeLong, the executive director of the bipartisan Connecticut Conference of Municipalities, questioned the ability and willingness of the two parties to compromise.

CCM is seeking legislation that would give municipalities flexibility in their dealings with public-sector unions as well as a new source of revenue: bumping the sales tax from 6.35 percent to 6.99 percent, with the additional money going to the cities and towns.