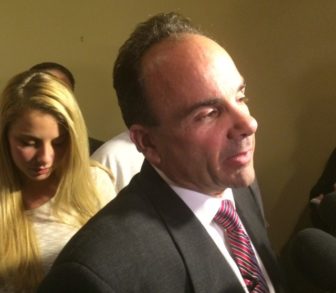 Bridgeport Mayor Joseph P. Ganim’s corruption conviction disqualifies him for public financing should he run for governor or other state office, the State Elections Enforcement Commission said in a preliminary ruling Wednesday.

Ganim asked the commission last month whether a 2013 law, which bars felons from receiving public financing for campaigns, applies to him or other politicians with convictions prior to passage. Ganim was convicted of corruption in 2003.

One of the questions Ganim placed before the commission: Is the bar on public financing to convicted felons a form of punishment and, therefore, a penalty wrongly applied to him or anyone else convicted of a felony before 2013?

Ganim had argued he was entitled to apply for public financing, because the 2013 law was “illogical, punitive and serves no legitimate, rational public policy interest” and cannot be applied to him retroactively.

“The Commission concludes that it is neither the intent nor the aim of the law in question to additionally punish felons,” the panel says in a preliminary ruling. “There is no evidence to support the Petitioner’s argument otherwise. The Petitioner argues that [the ban] serves no legitimate public policy interest and therefore should not be followed by the Commission. The Commission disagrees; the legislature had ample other reasons for passing the law.”

The commission will accept public comments on its preliminary ruling through June 15, then vote on whether to formally approve it on June 21. Ganim can appeal the commission’s actions to Superior Court.

Ganim said he was grateful the commission answered his request for a declaratory ruling quickly, but he believes the panel is wrong on the law.

“My sense is we will be challenging it at the next level. Is this constitutional?” Ganim said in a telephone interview. “The decision is counter-intuitive to the statute, It should at least be encouraging [participation] if not requiring it.”

Ganim, 57, a disbarred lawyer, was elected mayor in 2015, completing his unlikely comeback 24 years after winning his first term in city hall in 1991 and five years after ending a seven-year stay in federal prison in 2010. He defeated Mayor Bill Finch in a Democratic primary, then won the November election by a 2-1 margin.

More recently, he opened an exploratory committee that allows him to raise money to test support for a run for governor in 2018.

“I am very serious about this,” Ganim said.