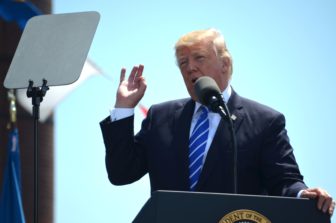 Washington – President Donald Trump’s budget would require Connecticut to drop residents from key social and health programs in the state, and make tough decisions on how to handle other proposed federal cuts to education, housing and the environment.

The president’s $4.1 trillion budget for 2018, unveiled Tuesday, would cut at least 20 percent from the Children’s Health Insurance Program, which in Connecticut is part of HUSKY Health. CHIP enrollment fell under the Affordable Care Act, but it still serves 16,000 children under the age of 19 in the state.

To pay for a boost in defense spending and other priorities — including a wall between Mexico and the United States — Trump proposed eliminating dozens of domestic programs, including one that helps pay heating costs for low-income Connecticut residents and another that provides grants to the state to fight homelessness.

It also cuts large entitlement programs, including Medicaid, the health care program for the poor, and food stamps, which help more than 400,000 Connecticut residents buy food.

Instead of enrolling all in Medicaid who qualify and splitting the cost of the program 50-50 with the federal government, the Trump budget limits the federal share by giving states a choice between receiving a per capita payout from Washington or a block grant.

The Trump budget also would make it more difficult for people to qualify for Social Security Disability Insurance benefits and make it easier to shift people who receive those benefits back into the workforce. The disability program, which provided Connecticut residents more than $840 million in benefits in 2013, would be cut by by $72 billion over 10 years. 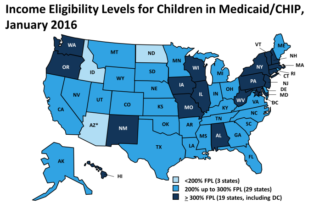 David Dearborn, spokesman for the Connecticut Department of Social Services, said, “The administration needs to analyze this budget before we can determine the specific impact.”

Gov. Dannel Malloy said, “While we continue to analyze its impact on the state, it is abundantly clear that President Trump’s budget is abysmal for working Americans.”

“In an effort to provide his wealthy friends tax breaks and fund his own unpopular projects, the president is devastating critical environmental programs, undercutting important educational initiatives, and decimating human services programs to the detriment of the sick, elderly, and poor,” Malloy said.

It’s up to Congress to determine whether Trump’s budget survives, in whole or in part. On Tuesday, the plan was panned by most Democrats and some Republicans.

Sen. Chris Murphy, D-Conn., a member of the Senate Appropriations Committee, said he would work “to make sure this budget never becomes a reality.”

“If President Trump’s budget ever became law, it would devastate Connecticut,” Murphy said. “It slashes funding Connecticut uses to provide children with health care, help college students pay for tuition, care for the elderly, and fight the worsening opioid epidemic…They say a president’s budget is a reflection of his values – if these are President Trump’s values, then everyone in this country should be sickened.”

“It is a gigantic bait and switch – betraying President Trump’s campaign promises by giving humungous benefits to the wealthy and the back of the hand to the most vulnerable Americans,” Blumenthal said.

Rep. Jim Himes, D-4th District, said “a budget proposal should be a visionary document, nothing like the extremist hit list we received today, which serves no purpose other than to further divide us.”

Connecticut’s universities would be affected by the elimination of dozens of research grants and an 11 percent, or about $776 million, reduction in the budget of the National Science Foundation (NSF).

Mick Mulvaney, the director of the Office of Management and Budget, defended cuts to the NSF, accusing the agency of wasteful spending.

“The National Science Foundation last year used your taxpayer money to fund a climate change musical. Do you think that’s a waste of your money?” he said in a White House briefing on Tuesday. 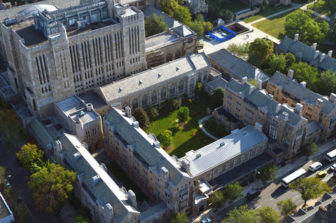 Aerial view of part of the Yale campus. The Trump budget hits health and science research.

“Where are the Trump Administration’s values?” asked Rep. Rosa DeLauro, D-3rd District. “These cuts jeopardize the health and well-being of the American people.”

“Our goal should be a budget that expands economic opportunity in Connecticut and across the country, lifts wages, promotes access to health care, protects our air and water, supports children and seniors, and makes us safer,” said Rep. Elizabeth Esty, D-5th District. “On these counts, President Trump’s proposal moves us in the wrong direction. Congress should start over from scratch on a bipartisan plan.”

The Trump budget also would end a loan forgiveness program for college students who commit to working after graduation for at least 10 years in a public service job, such as a teacher or police officer.

Also, for the first time, college students with Stafford loans would no longer have the interest on those loans subsidized while they are in school.

The budget also would cut state grants for career and technical education by $166 million, and nearly halve funding for the roughly $1 billion federal work-study program.

“This is the first time an administration has written a budget through the eyes of  people paying the taxes,”Mulvaney said.

But the budget, called “A New Foundation for American Greatness,” does not trim federal spending. It shifts spending from domestic programs to Trump’s defense and homeland security priorities.

A mixed bag on defense spending

Trump’s budget would boost the Pentagon’s spending, but even that is a mixed bag for Connecticut, which has a robust defense industry.

The budget proposes to continue the two-a-year pace of construction for Virginia-class attack submarines, boats that are built by Electric Boat and Newport News Shipyards in Virginia.

It also provides $1.9 billion to continue work on the Columbia-class ballistic missile submarine, which will also be built by Electric Boat.

The budget’s five-year projection also adds a Virginia-class sub to the Pentagon’s budget in 2021. Earlier budgets reduced the two-a-year pace to one that year because of the scheduled ramp-up of the Columbia-class program.

Courtney said the budget also increases the Navy’s maintenance budget, which could increase repair work at Electric Boat and could win the shipyard the lucrative contract to overhaul the USS Boise, an aging Los Angeles-class sub.

The budget also requests $7 million for the construction of a new complex at Bradley International Airport for the Connecticut National Guard. That center for the guard’s 103rd Airlift Wing would consolidate several squadron functions in one facility.

But some defense programs in Connecticut won’t see a boost under the president’s budget.

The number of F-35 Joint Strike Fighter, whose engines are made by Pratt & Whitney, would be reduced to 70 from the 74 that were included in this year’s budget.

Sikorsky-made Black Hawk helicopters also would be reduced from the 62 that were funded this year to 48.

The budget requests $1 billion for four Sikorsky “King Stallion” CH-53K helicopters, an amount agreed to last year. Blumenthal, a member of the Senate Armed Services Committee, said he would seek funding for two more of the heavy-lift helicopters.

Trump cut $100 million from an anticipated request for the Combat Rescue Helicopter, also made by Sikorsky. The president’s budget requested $354.5 million for this program.

Trump also has requested $2 billion for the new B-21 bomber, whose engine will also be built by Pratt $ Whitney. But the request is slightly lower than anticipated.

Funding for the Coast Guard would be essentially the same in 2018 as it was in the 2017 fiscal year, even though its leaders were hoping for a 5 percent increase.

Like former President Obama, Trump also calls for a new round of base closings, which would put Naval Submarine Base New London under scrutiny again.

“I think there’s going to be a lot of intense back and forth with the Pentagon,” he said.