While Gov. Dannel P. Malloy is urging legislators to act quickly to at least mitigate the deficit in the current fiscal year, Senate Republicans unveiled a plan Wednesday to avert proposed cuts in municipalities, hospitals and state parks.

It’s been largely a foregone conclusion since state income tax receipts tanked in late April that Connecticut would finish its third successive fiscal year in deficit.

But there is still time at least to reduce that shortfall before the fiscal year ends on June 30, and Malloy’s administration is reminding legislators that the clock is ticking.

“Legislative actions to mitigate the deficit must take place this spring,” Office of Policy and Management Secretary Ben Barnes, Malloy’s budget director, wrote Friday in a letter to leaders from both parties on the legislature’s Appropriations and Finance, Revenue & Bonding committees. “We have a mutual obligation to balance the budget each fiscal year and less than six weeks to do so for FY17.”

The governor has limited statutory authority to reduce spending unilaterally, and he used rescissions to reduce the projected shortfall over the past two weeks to $323 million.

Malloy also asked lawmakers to take several other steps, including:

These steps, if approved, would bring the deficit close to about $235 million. Connecticut then could cover the rest, under Malloy’s plan, by draining nearly all of its emergency reserve, commonly known as the rainy day fund.

“As we approach the end of the fiscal year, it is imperative that legislative leaders act swiftly to take up a deficiency bill and implement deficit mitigation,” Malloy spokesman Chris McClure said. “It is our position that any improvements in projections should be directed toward preserving as much of the rainy day fund as possible.” 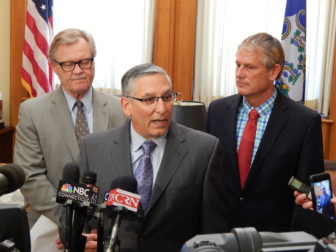 “A deficit of this size so late in the fiscal year is devastating because it leaves our state with very few options,” Senate Republican leader Len Fasano of North Haven said. “We thank the governor for putting forward his plan to close the shortfall, but we also have many concerns.”

Senate Republicans recommended $23.4 million in budget-balancing alternatives Thursday to avert the municipal aid, hospital and parks cuts, as well as to restore $1 million Malloy trimmed from support programs for the developmentally disabled.

The larger transfers include: $4 million each from the Banking and Insurance funds; $3 million from auto emissions; and $2 million from a program to reduce greenhouse gas emissions.

“We believe it is unfair to ask towns and cities to absorb such drastic financial hits in the last few months of the fiscal year,” said Sen. Kevin Witkos, R-Canton. “That leaves them no time to make adjustments, and could lead to property tax increases or significant shortfalls in funding for core services such as education.”

“In addition, we believe it is wrong to take privately raised funds away from state parks, which our parks rely upon to operate,” said Sen. Paul Formica of East Lyme, Senate Republican chair of the Appropriations Committee.