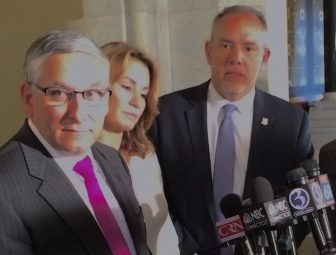 Legislative leaders and Gov. Dannel P. Malloy said Tuesday — after their first meeting in nearly two weeks — that this would change.

But some leaders also acknowledged the prospect of adopting a budget before the regular session ends June 7 is slipping away.

“I think we’re going to end up going to special session,” Senate Republican leader Len Fasano of North Haven said after Tuesday’s hour-long meeting between the governor and top Democratic and Republican leaders from the House and Senate.

“I think that’s very difficult to get done (by June 7), based on where everyone is,” Malloy said.

Leaders acknowledged that their fiscal staff and leaders of the legislature’s budget-writing committees had yet to begin comparing their respective proposals across the negotiating table — a process that usually takes several weeks as a precursor to any final budget deal.

That will change, leaders said, when detailed negotiations begin Wednesday.

Tuesday’s meeting was the first since May 17 — shortly after the governor and the caucuses swapped proposals on how to close a growing deficit — projected at more than $5 billion — in the next two-year budget.

Since then it’s been a rocky two weeks for Connecticut’s top leaders.

Fasano expressed frustration that the other three caucuses disclosed their ideas publicly before they could be reviewed in closed-door talks. He also said Democratic lawmakers produced only a collection of budget-balancing concepts — and not the detailed, line-item budget that had been agreed upon. 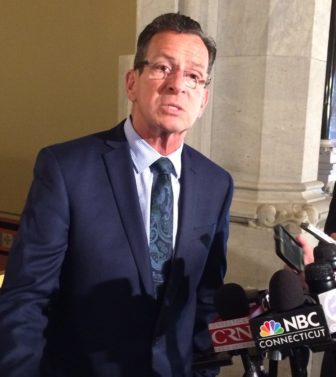 Malloy and Fasano chastised other legislative leaders for not adopting a plan to close a smaller deficit in the current fiscal year, which ends June 30.

And on Tuesday morning, House Speaker Joe Aresimowicz, D-Berlin, said that the governor and Fasano’s criticisms weren’t helping. “We can’t afford the opportunity to just continue to send letters to each other,” he said.

Aresimowicz spoke briefly with reporters after Tuesday’s gathering, calling it “another good meeting,” confirming that staff and committee leaders would begin detailed negotiations Wednesday and that top lawmakers and Malloy would gather again Thursday.

Aresimowicz then walked away.

Fasano and Senate President Pro Tem Martin M. Looney, D-New Haven, stayed a few minutes longer to talk with reporters, but neither offered much about the sluggish pace of budget talks.

When pressed to describe the mood among lawmakers Tuesday, the governor said, “There was no discordant tone. They’re not agreeing with one another but, you know, nothing was thrown.”