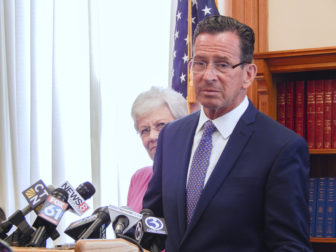 Gov. Dannel P. Malloy asked legislators to consider nearly $320 million in revenue increases to mitigate the massive cuts he would be forced to impose if Connecticut enters the new fiscal year Saturday without a budget.

But even if those steps are taken, Malloy outlined deep cuts to municipal aid, social services, hospitals, and public colleges and universities that would occur if he had to run the upcoming fiscal year by executive order.

“Connecticut can and will adopt a responsible, balanced budget for the coming biennium – the question is how best to handle our finances until that happens,” Malloy said. “I am prepared to operate government in the absence of a budget, but it has never been my preference to do so.”

The governor, who outlined his plans after a 90-minute, closed-door meeting with legislative leaders, added that he prefers that lawmakers adopt modest revenue increases to at least mitigate the fiscal pain — and believes Wall Street credit rating agencies do as well.

“It is a responsible, short-term option that allows us more time to negotiate a full budget, without making our current problems any worse and without further jeopardizing the state’s bond rating,” he said. “I urge the General Assembly to take up this mini-budget before the week is out.”

Drawing from proposals in separate budget plans offered by Democratic and Republican legislative leaders, as well as his own, the governor proposed $317.5 million in new revenue be authorized now — even though a full budget plan for the fiscal year starting July 1 still is being negotiated.

The General Assembly has been gridlocked since January over how to solve a huge projected shortfall in the next two-year budget.

The governor, who pronounced himself “frustrated” with the state of talks, said he would veto any of the budget options put forward so far by Democrats or Republicans. Failure to adopt a budget or a mini-budget would force him to act through executive orders.

“This is the question: Do you want to be responsible, and do you want to run government with the legislature playing a role, or not?” Malloy said.

Democratic leaders were noncommittal about whether they were ready to approve a budgetary stopgap measure.

“I don’t know that they’re amenable to a short-term plan,” House Speaker Joe Aresimowicz, D-Berlin, said. “Our caucus told us, when we met with them last time, to work as hard as you can to come up with a budget for the state of Connecticut for the entire biennium.” 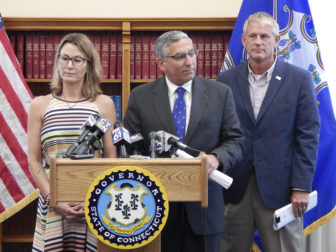 Republican leaders made it clear, though, they prefer to adopt a full budget.

“We feel very strongly that what this state needs is a budget,” Senate Republican leader Len Fasano of North Haven said. “Let’s get it moving. Let’s get the state moving. Let’s get municipalities moving. And if you want to amend it later as we go on, amend it later as you go on. But perhaps doing mini-budgets just prolongs the inevitable, which is just coming back here and talking and trying to get it worked out.”

When asked specifically whether they were leery of voting for the revenue measures, GOP leaders said only they need to review them more closely.

The governor showed top lawmakers Monday what would happen if he were forced to run the state for the next 12 months — absent a new budget — by executive order.

Municipal aid would be the biggest casualty, and the governor estimates cities and towns would lose more than $500 million in education grants.

Most of that aid isn’t distributed until late September, and while Malloy said he hopes lawmakers still feel a sense of urgency, he reminded reporters that other local grants are distributed during July and August.

Connecticut provided $182 million this year to offset some of the revenue communities lose because they cannot tax property owned by the state, or by nonprofit colleges and hospitals.

Those grants would be cut entirely, as would the $58 million in casino revenues the state shares with cities and towns.

It also was unclear whether a sales-tax revenue-sharing program which gave communities close to $180 million would continue. But the governor’s budget director, Office of Policy and Management Secretary Ben Barnes said even if it were funded, communities would not receive close to that level in a year without an approved budget.

The governor said his proposed revenue enhancements would restore some of those lost grants, but major aid still would be lost. Full details on that component of his plan were not available Monday afternoon.

Joe DeLong, executive director of the Connecticut Conference of Municipalities, said, “CCM will conduct a thorough review of the governor’s proposals so that we can properly inform our member towns and cities of their projected impacts. However, our continued focus will be on the adoption of a budget for the next biennium that protects property taxpayers and provides our communities with the tools and reforms needed to spur economic growth across all of Connecticut.”

Another casualty without a state budget would be Connecticut’s hospitals.

The governor said $35.6 million in state tax reimbursement payments to these facilities, which in turn trigger $75.8 million in federal Medicaid funds for hospitals, would be lost. Malloy’s plan would restore all of these funds, though, if temporary revenue enhancements are approved.

More than $116 million would be cut from three of the state’s major human services agencies — Social Services, Developmental Services and Mental Health and Addiction Services. 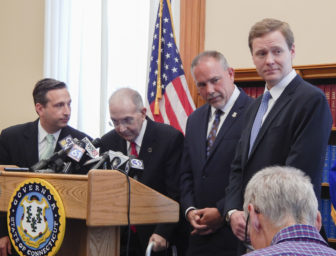 And administration officials acknowledged private, nonprofit social service agencies, which provide many of the state-sponsored services, would be severely impacted.

The governor also would cut funding for public universities and colleges by $62.2 million, cuts in excess of 10 percent for the University of Connecticut, its Health Center, the Connecticut State Colleges and Universities.

These additional cuts rip at least a $20 million hole in UConn’s proposed budget that its governing board was set to pass on Wednesday.

The Board of Regents for Higher Education, which oversees the state university and community college systems, has decided to hold off on passing a budget until it is more clear the size of the cuts that the legislature or governor will implement.