Malloy prepares CT for life without a new state budget 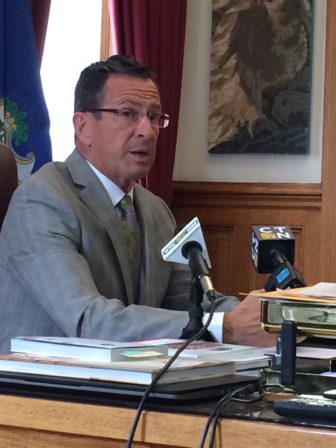 Gov. Dannel P. Malloy signs the executive order under which he will run state government in the absence of an approved budget.

Gov. Dannel P. Malloy struck a conciliatory tone Friday, urging legislative leaders to adopt a new budget even as he signed an executive order to begin managing state finances without one.

Yet while he urged legislators to come together he also acknowledged he hasn’t shifted his own fiscal stand much since he proposed his first two-year budget to the General Assembly almost five months ago.

Malloy, who met with reporters in his Capitol office one day before the new fiscal year began, also repeated his warning that social services, aid to towns and most other programs would suffer significantly without a new budget.

“This is a regrettable path and one that I worked very hard to avoid,” Malloy said, referring to the three-month provisional budget he asked legislators to adopt this week.

This still would have imposed cuts on all areas, but would have approved modest tax hikes to limit those reductions, the administration said.

Senate leaders said Thursday they were ready to take up the agreement. But Democrats in the House, who hold a 79-72 edge over Republicans, said they didn’t have enough members present to pass the plan themselves, and Republicans only would support an alternative plan.

But while Malloy severely chastised the legislature Thursday, he struck a different chord Friday and urged all legislators to focus on getting him a budget.

“I do not doubt that we can and will get through this,” the governor said. “Connecticut’s elected leaders will come together, and we will adopt a full, biennial budget. My administration will continue working every day towards that end — towards a budget that makes the necessary structural changes to achieve balance, now and into the future.”

House Democratic leaders have said they are calling rank-and-file members back to the Capitol on July 18, possibly to vote on a two-year budget — if one has been negotiated — or on a provisional one.

But legislators have been gridlocked for months over how to close huge projected deficits.

Lawmakers have said they hope to avoid major tax hikes after ordering them in 2011 and 2015, but taxes remain a point of contention, as do proposed cuts to social services and municipal aid, as well as a tentative concessions deal between the governor and state employee union leaders.

Yet the governor also said earlier in the press conference that, “I can assure you that my base positions have not changed substantially.”

So what happens when the governor and legislative leaders each have different definitions of “the greater interests” of Connecticut and its people?

“I can only assure you that we will — as I have over the last six years and I will continue in the seventh year — desire to reconcile those differences to the greatest extent possible,” Malloy responded. “That’s what I was elected to do. There’s no job description for governor that says it’s going to be easy.”

Meanwhile, the governor warned that some will suffer during the interim.

Having to run state finances by executive order “offers me less ability to avoid very deep cuts that will have a very real impact on our state and its citizens,” the governor said. “… My focus will be on protecting services for our most vulnerable: the mentally ill, the developmentally disabled, and others who simply cannot care for themselves. And to be clear, even these services will need to be scaled back in one form or another.”

When the new fiscal year begins Saturday, Connecticut will owe hundreds of millions of dollars more for things like:

And none of these extra costs goes down by one penny just because there is no new budget.