The Connecticut legislature is still on its rocky road toward a budget, but the process moved forward last week when the long-awaited results of a union concessions vote were announced.

The results of the vote were announced Tuesday by the State Employee Bargaining Agent Coalition. The agreement is expected to be worth $1.57 billion over two years. Now the attention returns to the General Assembly, where legislators are divided over how to proceed.

Union officials said that 85 percent of the votes cast were in favor of accepting concessions that will freeze wages and 83 percent backed increased contributions for health benefits and pensions as well as other concessions.

All 33 of the bargaining units that cast ballots on wage-related concessions endorsed the deal. Units representing state police and assistant attorneys general did not vote on wage givebacks.

The legislature ended its regular session last month without deciding how to put together the spending cuts and new revenue necessary to erase a projected shortfall of $2.3 billion in the fiscal year that began on July 1. (For an analysis of how the state got into its budget predicament, see the series by Connecticut Mirror reporter Keith Phaneuf here.) 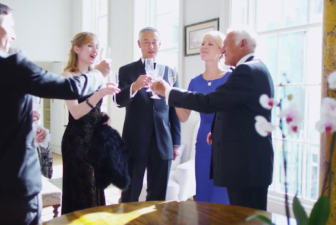 Depiction of the “wealthy and powerful” in the union ad.

The 30-second video, styled as a film trailer, exhorted state officials to raise taxes on the rich as acknowledgement of the concessions by the unions.

Republicans have consistently argued against tax increases. But when it comes to boosting taxes on wealthy households and corporations, Malloy and many Democrats in the legislature have joined Republicans in opposition.

A study released Wednesday concluded that the Affordable Care Act delivered $1.16 billion in increased federal funding for health care in Connecticut and sharply lowered the number of uninsured residents and the cost of uncompensated care.

The study was commissioned by the Connecticut Health Foundation. The data were released on the same day that analysts with the Congressional Budget Office and Joint Committee on Taxation estimated that repealing portions of the Affordable Care Act would increase the number of uninsured nationally by 17 million next year, 27 million by 2020 and 32 million by 2026.

President Donald Trump and congressional Republicans have tried — and so far failed — to either repeal or replace the Affordable Care Act, but another vote is scheduled for Tuesday.

Connecticut’s two senators said Tuesday after the Senate attempt to remake the health law collapsed of Republican efforts that they are willing to make compromises regarding the Affordable Care Act.

Murphy said he is willing to negotiate, including allowing health plans on the individual marketplace that are not compliant with the Affordable Care Act. Murphy said he could support “flexibility in benefit design.”

In a bit of good economic news, the state added 7,100 private-sector jobs in June  after adding more than 5,000 jobs in May. The private sector has now regained 102 percent of the lost non-government jobs from the 2008 recession. 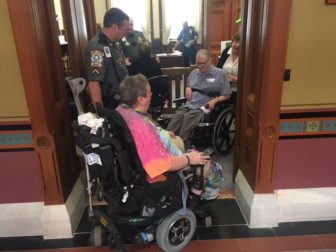 Elaine Kolb backs out of the governor\’s outer office after her arrest.

Because the state has been operating without a budget since July 1, many state services to disabled and handicapped people have been cut back.

On Tuesday, some of those affected by the cuts voiced their displeasure with a protest that resulted in five people being cited for third-degree trespassing after they refused to leave the governor’s outer office at the Capitol.

Malloy wasn’t there, though. He was attending an event in Bridgeport.

The previous day, Malloy had toured HARC Inc., a non-profit provider of services to the intellectually disabled, and sought to enlist clients and their families to pressure the legislature to reach a budget agreement.

Without a budget, the state Department of Social Services has suspended funding to 26 non-profits, saving about $1.8 million. Agencies like HARC, which provide direct care, have seen their funding cut.

Overall, about $1.4 billion of the state’s $20 billion annual budget goes to non-profits, including about half to provide services for the intellectually and developmentally disabled.

A step forward on construction of third casino

Malloy and tribal leaders on Thursday signed documents amending the state’s relationship with its two federally recognized Native American tribes, another step toward building a third casino in the state.

The Mashantucket Pequot and Mohegan tribes want to jointly develop a casino in East Windsor, the first to be located off tribal land. The idea is to compete against a casino being developed in Springfield by MGM Resorts International.

Secretary of the State Denise Merrill told a panel of Congressional Democrats Tuesday that she is “alarmed” that a voting commission created by President Trump appears to be trying to find ways to suppress voting by minorities. 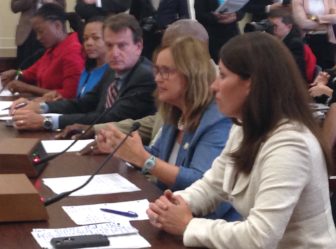 Secretary of the State Denise Merrill, second from right, testifies before a panel of House Democrats.

Merrill, a Democrat who until last week was head of the National Association of Secretaries of State, testified at an unofficial hearing on voting rights held by U. S. Rep. John Conyers Jr. of Michigan, the top Democrat on the House Judiciary Committee.

The hearing was also organized by members of the Congressional Black Caucus and the Congressional Hispanic Caucus, who fear Trump’s Commission on Election Integrity was created to suppress the votes of minorities, who tend to support Democratic candidates.

The commission is led by Vice President Mike Pence and Kansas Secretary of State Kris Kobach, a Republican who pushed through a tough voter ID law in his state. Trump created the panel because he believes millions of votes were cast illegally in November’s election, although that claim is unsubstantiated.

Trump had gathered some U.S. manufacturers, including Stratford-based Sikorsky, at the White House Monday to mark “Made in America” week.

Murphy attended the event. For several years, Murphy has pressed for legislation that would tighten regulations requiring federal agencies to give preference to American companies.

Murphy said he used the event to meet with representatives of Sikorsky and baker Pepperidge Farm, which is based in Norwalk.

Later in the week, on Wednesday, Pratt & Whitney used the event to show off its innovative geared turbofan jet engine. The Connecticut-made PurePower engine, which is a quieter and more efficient commercial engine, had many admirers.

“This is a product that is made in America that is exported to other countries,” said Rep. John Larson, D-1st District.