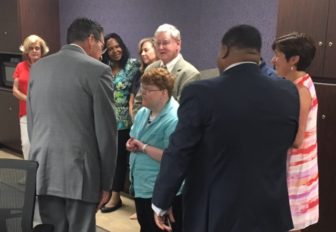 Gov. Dannel P. Malloy on Monday toured HARC Inc., a private non-profit that serves 2,254 families of intellectually disabled children and adults, an effort to use recipients of state-funded services to pressure the deadlocked Connecticut General Assembly to adopt at least a temporary budget.

Malloy’s tour came amid signs that little has changed since the closely divided legislature ended the regular session last month unable to compromise on a mix of spending cuts and new revenue necessary to erase a projected shortfall of $2.3 billion in the fiscal year that began on July 1.

House Democrats are to caucus Tuesday on the budget, but no votes are scheduled by the House. State employee unions are expected to report whether their members have ratified a tentative concession deal. Rejection means the projected current-year shortfall would jump to $3 billion.

“If the people in the legislature were feeling the kind of pain that the people at HARC were feeling, we’d get there,” Malloy said. “And when they start to feel that level of discomfort, we will get there.”

But the impacts of Connecticut’s budget impasse are falling unevenly, at least in the first weeks of the new fiscal year. State parks and beaches have remained open, as have state offices. State aid to municipalities is not due to be paid until September.

The state Department of Social Services has suspended funding to 26 non-profits, saving about $1.8 million. Agencies like HARC, which provide direct care, have seen their funding cut, not eliminated.

Overall, about $1.4 billion of the state’s $20 billion annual budget goes to non-profits, including about half to provide services for the intellectually and developmentally disabled.

Malloy said he is open once again, if the legislature is unable to agree on a full budget, to at least adopting a 90-day spending plan that would allow his administration to better fund non-profits like HARC, whose leaders say limits imposed on July 1 threaten to destabilize a range of supportive services.

He called the legislature’s unwillingness to agree on even a 90-day budget “a frustration.”

His visit to HARC, a non-profit founded in 1951 by parents of disabled children, was not without political risk: Even in better times, families of the intellectually disabled have been critical of this governor and his predecessors for long waits for residential programs, as well as day programs and other services for individuals who reach age 21, when they no longer are served by public schools.

To families of the disabled, the deadlock is galling.

HARC helps 107 individuals hold jobs at 36 locations, including the cafeteria in the Legislative Office Building.

Connecticut dropped from 17th to 27th last year in United Cerebral Palsy’s annual rankings of how well the 50 states and the District of Columbia serve the intellectually disabled. The state ranked in the top ten on two measures: Tracking health, safety and quality of life; and promoting productivity. It was one of just 10 states where at least one-third of the tracked population had competitive employment.

But it ranked 39th in promoting independence and 41st in reaching those in need.

Najib O. Habesch, the chairman of HARC’s board, told Malloy that, ideally, the state would increase funding to meet the needs of the disabled, a line that prompted laughter.

“Well, you go out and get me some more revenue,” Malloy said, smiling.

Irene Fortier, whose sister is in a group home, told Malloy the prospect of a continued budget impasse was unsettling to Connecticut’s most vulnerable population.

“The unknown is really scary,” she said.

House Minority Leader Themis Klarides, R-Derby, issued a statement later Monday that the GOP minority was ready to vote on its version of a new budget for the next two years.

“Having the state run by executive fiat is the least attractive scenario that we face,” Klarides said. “House Republicans are prepared to vote on our two-year budget now, and formulated  a temporary, one-month budget version as well that does not gut social services programs.’’