In CT’s battle with feds over rail, a new front in Fairfield County 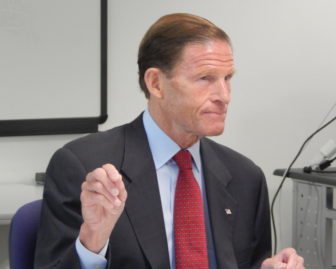 Stamford — Fresh off a recent victory in southeastern Connecticut, activists and U.S. Sen. Richard Blumenthal have begun organizing opposition to a second federally proposed rail segment. This time, the fight is in lower Fairfield County.

The Federal Railroad Administration is recommending  a new rail segment for high-speed trains between New Rochelle, N.Y., and Greens Farms in Westport to speed up service between New York and Boston. Opponents are calling it a “Fairfield County bypass.”

Federal officials pitched the idea as part of their final plan for NEC Future, a sweeping vision for reshaping rail service from Boston to Washington, D.C. – the Northeast Corridor – as it braces for an increase ridership expected in the coming decades. The plan is meant to guide state and federal investments in the years to come.

The state has the final say on any new route. Funding would be split between the federal government, which would pick up most of the cost, and the state.

The Fairfield County route had received little attention from public officials and activists until recently, as much of the effort in the past year focused on defeating a proposed bypass from Old Saybrook to Kenyon, R.I.

Opponents of the Kenyon bypass said it would run through historic and cultural sites in southeastern Connecticut – with Old Lyme’s historic district being the hardest hit – and cause environmental damage. It prompted numerous public hearings attended by hundreds of concerned residents.

The FRA opted last month not to include the Kenyon bypass in NEC Future’s Record of Decision — the agency’s final word on the project — but kept the Fairfield County changes in the plan.

State Department of Transportation Commissioner James P. Redeker said he believes the FRA has developed a map for the route, but the only information publicly available so far consists of three sentences included in the Record of Decision:

“The new segment beginning in New Rochelle, N.Y., extends through Greenwich, Stamford, and Norwalk to Greens Farms. Additional high-speed track capacity is necessary to achieve the service frequency and travel time objectives between New York City and New Haven. The specific routing, location, construction type, and other design elements of this segment will be the subject of a subsequent Tier 2 environmental process.”

Despite the lack of specifics, Blumenthal held a roundtable in Stamford Tuesday to set the stage for opposition to the segment. He said he wants to “drive a stake through it.” 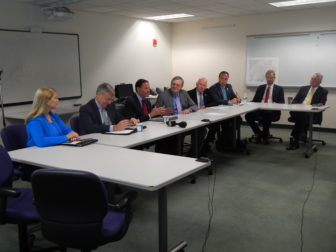 Blumenthal organized the roundtable in Stamford Tuesday to give local leaders a chance to ask questions and voice concerns about the bypass.

Top municipal leaders from every Connecticut town along the corridor – Greenwich, Stamford, Darien, Norwalk and Westport – joined Blumenthal to voice their concerns about the proposal.

The leaders, who oversee some of Connecticut’s wealthiest cities and towns, said they fear the federal government is giving little-to-no regard to residential and commercial districts when drawing its routes for high-speed trains. They worry that the mere existence of a new line on a map – even if it has no realistic chance of implementation – could have an impact on their ability to attract businesses and homeowners.

“I am happy that (the FRA) made the decision to run high-speed rail through this part of the state,” Stamford Mayor David Martin said. “I am not happy with the lines that they drew with their crayons, running through various neighborhoods.”

“It is driving investment decisions today,” Darien First Selectman Jayme Stevenson said. “When developers see those rudimentary crayon lines on a map that might go through a parcel of land that they’ve made investments in, or they’re thinking about making investments in, they’re rethinking their investments.”

“We have some comfort that these are all theoretical, but people looking to make investments here have a different viewpoint,” she added.

To the municipal leaders, the concerns seemed obvious. Still, Blumenthal told them what may seem obvious here may not be as obvious in Washington, D.C.

“Never underestimate the stupidity of the federal government,” Blumenthal said.

The leaders – much like their counterparts in southeastern Connecticut – said the priority needs to be on improving existing rail infrastructure, bringing the tracks, bridges, crossings and equipment up to “a state of good repair.”

And for all intents and purposes, that is what the state intends to do at this time.

Redeker stressed that any bypass must be vetted, approved and funded by the state. As long as he is commissioner, he said, that’s not happening.

Redeker said the state instead will continue to follow Gov. Dannel P. Malloy’s $100-billion transportation plan, which calls for billions of dollars in rail investment. It does not include any bypasses, and state officials are not obligated to follow the FRA’s plan.

But when Connecticut’s next governor takes office in January 2019, Redeker conceded that priorities could shift. 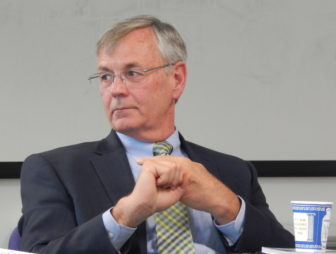 James P. Redeker, commissioner of the state Department of Transportation.

Even if Connecticut does not give the segment a green light, Blumenthal said its existence in a major federal plan could pose problems when trying to secure federal funding for the existing rail lines.

“I go to federal officials and say, ‘We need this money now,’” Blumenthal said. “My worry is, if they say to me, ‘Yeah, Stamford really needs federal funding, but we may have an alternative.’ It’s a reason for them to decide negative.”

Blumenthal said it is unlikely the Record of Decision could be amended to remove the segment or incorporate additional alternatives.

Greg Stroud, director of special projects for the Connecticut Trust for Historic Preservation, was one of the earliest organizers of the opposition in southeastern Connecticut, where the primary focus was on eliminating the bypass altogether and maintaining the existing route – not presenting alternatives.

This time is different, he said. Southwestern Connecticut is “stuck between a rock and a hard place,” he said, with cities and towns developed tightly around the existing rail lines, limiting the extent to which changes can be made without exacting a toll on a local economy, the environment or historic preservation.

Yet, the existing infrastructure is incapable of accommodating the influx in ridership expected to overwhelm the system by 2030. That might necessitate greater action than mere repairs in the coming decades, he said.

Still, the segment should remain off the table, he said, especially if it is “vastly different” from the current route, as he believes it would be.