Push for new CT budget deal going down to the wire 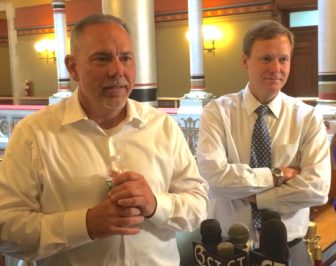 Democratic legislative leaders insisted late Wednesday afternoon — one day before legislators hope to vote on a new state budget — that they remained close to a deal with Gov. Dannel P. Malloy but continued to struggle over key policy questions.

The Democratic leaders, who spoke with reporters after a 30-minute meeting with the Democratic governor, also expressed disappointment with municipal advocates, who made a last-ditch effort Wednesday to rally support for the Republican state budget proposal.

“There’s a couple of substantial hiccups that we need to figure out in the next 24 hours,” Aresimowicz said.

“Obviously there are technical issues regarding the implementers and the volume of work that needs to be done,” Looney said, referring to key policy changes that must be included in every budget to implement programmatic changes. “So it may be a long night.”

Sources said the state’s role in overseeing financially distressed municipalities remained one of the key sticking points in the talks.

Malloy did not talk with reporters immediately after the meeting.

Thursday’s planned vote is key because the Senate reportedly cannot meet again after this week until October because of scheduling challenges. And, absent a new budget, Malloy has said he must order huge cuts to municipal aid on Sept. 30 and again on Oct. 1.

Sources say there is general agreement on several key components including:

Sources said there is still some disagreement between the governor and Democratic legislators over the caucus’s proposal to impose a 50-cent or $1 surcharge on monthly cell phone bills and the governor’s push to reduce the estate tax, which applies to estates worth more than $2 million.

The deal also would require cities and towns to begin paying a portion of the annual contribution to the teachers’ pension fund, which led municipal advocates to endorse another plan Wednesday.

Communities would pay only the “normal cost,” an actuarial term referring to the full amount that must be set aside annually to cover the future pensions of present-day teachers. And that burden would be phased in over two fiscal years. Malloy originally wanted towns to pick up a much larger share.

The Connecticut Conference of Municipalities and the state’s Council of Small Towns issued a statement endorsing the Republican alternative budget, which does not shift any pension costs.

“It has been and remains the position of CCM and COST that towns and cities currently have no control over teachers’ pensions, and until the system is studied and appropriate reforms enacted, shifting costs onto the property tax will have a devastating impact on communities all across Connecticut,” CCM Executive Director Joe DeLong and COST Executive Director Betsy Gara wrote in a joint statement.

“Having time to review this proposal our organizations are appreciative and supportive of the mandates relief and local structural reforms that are contained within” the GOP plan, they added.

Democrats have several problems with the Republican plan.

Republicans want to save $270 million in the new budget by scaling back employee pension benefits after 2027 — when the current benefits contract expires. Republicans say these changes reduce required contributions into the pension fund starting right away. Democrats counter these changes can be done only through collective bargaining, a legal position Republicans say is incorrect.

Some Democrats also object to the Republican budget because it reduces income tax credits for the working poor more than the Democratic plan does.

“The Republican budget will never be signed by the governor — ever,” Ritter said. Without a new budget, the state will continue to run massively in deficit, forcing Malloy to cut local aid by hundreds of millions of dollars, Democratic leaders said.

Republicans are refusing to support the plan Malloy and Democratic leaders are working toward, largely because of the tax hikes involved to help close significant projected deficits. Analysts say state finances, unless adjusted, would run $1.6 billion in the red this fiscal year and $1.9 billion in deficit in 2018-19.

Democrats need almost unanimous support from their members to pass a new budget without GOP votes. Democrats hold a slim 79-72 edge in the House. And while the Senate is split 18-18, the tie-breaking 37th vote is held by the Senate president, Lt. Gov. Nancy Wyman, a Democrat.