Fate of budget uncertain as Senate agrees to attempt passage 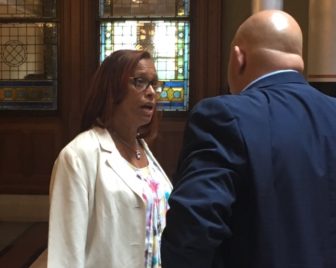 On the second try to pass a compromise budget, the House Democratic leadership was counting Friday on the evenly divided Senate, where three fiscally conservative Democrats have been in open revolt, to pass the bill first and increase pressure on recalcitrant House members to fall in line.

Uncertainty over whether the Senate could pass the budget contributed to the reluctance of some House Democrats to commit their votes Thursday night, when the House was scheduled to vote first on the plan to end Connecticut’s summer-long budget impasse.

Rep. Jonathan Steinberg of Westport, one of at least four House Democrats sources say have not committed to a budget vote, enough to block passage, praised the General Assembly’s leadership for flipping the order of debate and making the Senate go first.

“If there is going to be a path to a budget in the next two weeks, it’s got to start with the Senate going first,” Steinberg said.

But senators arrived at the State Capitol early Friday afternoon with three of the 18 Senate Democrats still uncommitted to voting for the budget. In the evenly divided Senate, passage requires the consent of all Democrats, plus the tie-breaking vote on Lt. Gov. Nancy Wyman.

While Senate Democrats cannot afford to lose a single member, the situation in the House is only marginally better.

House Speaker Joe Aresimowicz, D-Berlin, and House Majority Leader Matt Ritter, D-Hartford, are hobbled by leading the smallest working majority in the history of the House. In a chamber where 76 votes is a majority, the Democrats hold just 79 seats.

One of the fiscally conservative House Democrats, Rep. John Hampton of Simsbury, has all been ruled out as a possible yes vote, meaning the defection of three others would block passage of a budget, unless one or more of the 72 House Republicans was absent.

Ritter acknowledged Friday that margins are tight and that uncertainty about whether the Senate could muster a majority was an issue. The Senate leadership’s difficultly with three Democrats over the budget has been public for weeks.

“I just think in talking to House members there’s been a general feeling that the Senate, for a long time, has been very open about its membership having different ideals and priorities,” Ritter said. “It’s been very public.”

“If they are able to get there, we can get there,” Ritter said.

Ritter said the failure to pass a budget Friday or Saturday would be a major setback, most likely pushing the budget impasse into October.

The compromise plan would raise more than $1.5 billion in new taxes and fees over this fiscal year and next combined, and would shift significant cost burdens onto cities and towns, to help close major projected deficits. Without adjustments, finances would run $1.6 billion in the red in the first year and $1.9 billion in the second.

Senate President Pro Tem Martin M. Looney, D-New Haven, told reporters Thursday that he “believed” all 18 Democrats in the Senate would vote for the budget. But the three fiscally conservative Senate Democrats who have been working as a mini-voting bloc on the budget — Paul Doyle of Wethersfield, Joan Hartley of Waterbury and Gayle Slossberg of Milford — have yet to publicly commit their votes.

And several sources told CT Mirror the trio had not told Senate Democrats how they intended to vote as of 1 p.m.,  setting the stage for another day of drama at the State Capitol.

If the Senate passes the budget, it will be immediately taken up in the House, where members have been instructed to be available for votes, beginning at 5 p.m., probably an optimistic starting time.