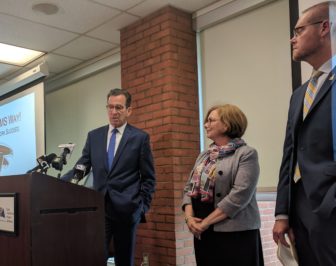 East Hartford – Calling the Republican budget approved by the General Assembly “one hot mess,” Gov. Dannel P. Malloy predicted Wednesday that he and state legislators are unlikely to agree on a bipartisan budget before Oct. 1, when most municipalities are expected to see big cuts in state aid for education.

“It’s an important date,” Malloy said, but added it was one “we are highly unlikely to meet.”

The Democratic governor is to meet Friday with Republican legislative leaders, whose budget was passed unexpectedly Friday night by the Senate and early Saturday by the House after three Democratic senators and five House Democrats voted with the GOP.

But bipartisanship was proving elusive Wednesday.

“The governor has his own version of reality,” Klarides said.

State education funding to be a battleground in budget dispute

The Democratic budget would cut the state’s primary education grant by 6 percent this fiscal year. The $124 million in cuts would fall entirely on affluent and middle-income communities. Nearly $11 million would be redirected to many of the 30 lowest-achieving districts, and the remainder would go toward closing the state’s budget deficit.

Currently, two-thirds of the state’s primary education grants, known as Education Cost Sharing (ECS) grants, go to the bottom 30 districts. And while the Republican plan would increase education aid by $68 million this fiscal year, struggling districts would not have a higher priority than they do currently. The 30 lowest-achieving districts would get a $46 million increase, and better off communities would receive $22 million more. No towns would lose aid.

Malloy’s main issue with the Republican budget seemed to be the cuts it would make to several small grants that fund reading tutors, after-school programs and professional development for educators primarily in the state’s 30 lowest-achieving districts.

Fasano sharply suggested that Susan Herbst, the president of the University of Connecticut, emulate other public universities in states like Colorado, which he said looked to resources other than general funds to maintain their programs. The state funds about 44 percent of UConn’s budget, with the rest coming from tuition, research grants, room and board, and other sources.

“We’ve all got to make changes. We’ve got to figure out other resources. That’s what they said, and they’re right,” Fasano said. “And that’s what this President Herbst is going to have to do. She has to stop bellyaching about this.” 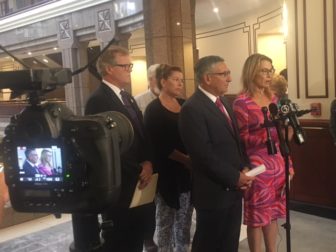 Herbst said the GOP budget would cost UConn about $300 million over the biennium, or 20 percent of its budget. Fasano said the real impact of the cuts would be no more than $240 million, still a major reduction.

With it becoming increasingly clear that no budget will be adopted by the end of next week, Malloy said he does not believe any towns will immediately have cash flow problems or risk insolvency Oct. 1 as a result of the looming cuts.

Without a budget in place, state funding is being distributed based on the governor’s executive order. The governor has no authority to raise revenue unilaterally and can only depend on cuts to keep the state out of the red.

By this point one year ago, communities already had received nearly $120 million in non-education aid, but that didn’t go out this year because of the executive order. More importantly, property tax relief grants that delivered $180 million to municipalities last year on Sept. 30 will not go out this year without a budget. And if the standoff continues until Oct. 1, when the major education grants usually are released to school districts, those payments will be scaled back by 28 percent, or $130 million.

With the cuts beginning to add up, the governor’s budget office wrote every municipal leader last month asking them to inform his office if their city or town was facing problems paying their bills under the executive order.

As problems arise – as is expected in some municipalities, such as Hartford – Malloy said he will be willing to work with towns and consider sending them state aid early that they typically would be owed later in the fiscal year to help with their cash flow problems.

“If we were to become aware of that, because communities are working with us so that we can understand their fund balance, then I am certainly capable of taking that into consideration,” he said. “If people bring to us verifiable fund balance problems, then we will address them.”

The Republican leaders urged Malloy to sign the GOP-crafted budget rather than continue to operate state finances without an approved plan.

“This is not what our perfect world would be,” Klarides said.“This is is the reality of where we are. There are towns on the verge of falling apart.”

“This has been passed bipartisanly,” Fasano said. Of the Democrats, he said, “They don’t have a budget that they can say, ‘We can get that passed.’ ”

Responding to criticism from Malloy that the Republican budget bolsters education aid — on a percentage basis — more for some suburban communities than for some poorer cities, Fasano said Republicans, at least, are adhering to a fixed methodology. Malloy in East Hartford took issue with a few better off towns getting increases (Salisbury a $36,000 boost and Greenwich $93,000) while some struggling districts were flat funded.

Democratic-controlled legislatures for years have adjusted education grants in contradiction to formulas designed to equalize aid based, in part, on local wealth.

“We have a formula,” Fasano said. “It is what it is. You’re supposed to implement it and we did.”