Malloy: My GOP budget criticism is vetting, not kvetching 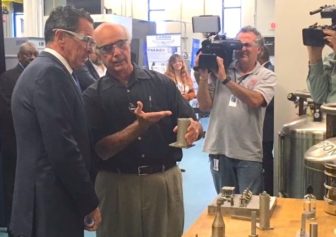 East Hartford — Gov. Dannel P. Malloy took a softer tack Thursday in his continuing critique of the Republican budget now on its way to his desk, saying he was offering “constructive feedback” and vetting of a plan whose passage late last week caught lawmakers, legislative analysts, the press and public by surprise.

“I understand that this may seem like grandstanding or partisan posturing among the political parties, but I assure you that is not my intention,” Malloy said. “In fact, the purpose of going through these motions of vetting the budget and talking about it publicly is to bring to light the very reasons why I will not be supporting it.”

In a visit to the Connecticut Center for Advanced Technology in East Hartford, Malloy said the budget he intends to veto would cut too deeply in primary education, higher education and workforce development, undermining the state’s ability to compete for jobs.

“Plain and simple, this budget pulls the rug out from under our economic and workforce development efforts at a critical juncture for our state,” Malloy said. “This is yet another reason why I cannot support the budget that was passed out of the General Assembly.”

The change in the tone of the governor’s messaging appears to signify a concern that Malloy’s refusal to sign the budget and end a summer-long impasse is being dismissed as partisan politics. The administration is intent on focusing attention on the content of the GOP plan.

“Instead of press conferences, it would be nice to see leadership from the governor,” Fasano said. “The governor and Democrat leaders have yet to offer a budget that can actually be passed by the General Assembly. But the legislature has in fact passed a budget. It’s a budget that aims to put our state on the long and difficult road to move in a new direction and create an environment that benefits all job creators and encourages opportunities for all people.”

One key question for the administration: Who is Malloy trying to win over, the newly empowered GOP leaders? Or three dissenting Democrats in the Senate and two in the House whose votes he needs to pass a Democratic budget?

Without sharing details, Malloy said he has reached out to the three Senate Democrats who voted with the GOP: Paul Doyle of Wethersfield, Joan Hartley of Waterbury and Gayle Slossberg of Milford.

He was cautious when asked if he viewed the dissenting Democrats as casting protest votes calculated to force changes in a Democratic plan or whether they were embracing the GOP budget as a workable fiscal plan for the next two years.

“I have not questioned the motives of those folks,” Malloy said. “Obviously they did so out of conviction, so I accept that. I’m not sure everyone understood the implications of the Republican budget, so we’re examining it. That’s what I said I would do.”

Malloy is to meet Friday with Republican leaders of the House and Senate. He talked Thursday with House Democratic leaders.

The non-partisan Office of Fiscal Analysis says the GOP put forth a balanced budget for the next two years, but it would put the state back in the red with a $3.31 billion deficit between 2019 and 2021. The version offered by Malloy and Democratic leaders is worse, producing a shortfall of $3.58 billion.