Washington – An ambitious  — and to some in Connecticut controversial — plan to overhaul the railroad in the Northeast Corridor has come to a full stop, a victim of lack of funding.

There also has been pushback to the plan from Fairfield County residents who fear the impact of laying down new high-speed-ready tracks and other development near their neighborhoods.

The Federal Railroad Administration in July issued its final Northeast Corridor (NEC) Future plan that detailed a long-term vision to improve and grow passenger rail service in the corridor at a cost between $121 billion and $153 billion.

The plan, called “Tier 1,” included adding 200 miles of expanded track capacity between Washington, D.C., and Boston, and making sure most of those new tracks can carry trains traveling at up to 220 miles per hour.

But Federal Railroad Administration spokesman Marc Willis said none of the eight states that would be impacted by the plan have submitted new project proposals so that NEC Future can move into the “Tier 2,” or project-level, phase of the plan.

“Right now, there is nothing going on,” Willis said.

A major problem is money. Some states are waiting for the Trump administration to follow through on a promise of a major infrastructure plan, a costly endeavor whose prospects have been dimmed by the current push to overhaul the federal tax code – which would cost the U.S. Treasury about $1.5 trillion.

While federal money could pay up to 80 percent or more of a new project, Connecticut’s transportation budget is facing a severe shortfall and is not likely to come up with the difference.

Then there’s concern about the impact of development on densely populated and historical areas in the state.

The NEC Future plan was met with heavy resistance in the eastern coastal section of the state, especially in the town of Old Lyme, because of the plan’s proposal to put a second set of tracks further inland along that coast.

The final Tier 1 plan scrapped that idea, and instead called for a New Haven-to-Providence “capacity planning study” to address capacity constraints, speed restrictions and the threat to the rail system posed by flooding along the Connecticut and Rhode Island shoreline.

Now resistance to the NEC Future plan is coming from Fairfield County.

Westport has recently reached out to the Washington, D.C., mega-law firm of Akin Gump Strass Hauer and Feld in case there’s a need to legally challenge NEC Future’s proposed changes in the area, which include turning its local Green’s Farms train station into an infrastructure hub and establishing new elevated tracks in the region.

To Sara Harris, operations director in the town of Westport, the idea of expanding the Green’s Farms station makes no sense since there are better locations in Fairfield County for a new hub.

“We want to preserve the character of the (Green’s Farms) station,” Harris said. 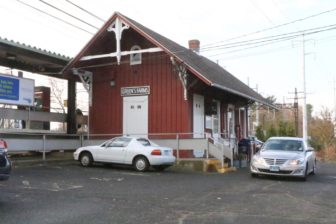 She also said, “There’s concern not only in Westport but in all the surrounding towns,” over the NEC Future plan’s proposal to add tracks between New Rochelle, N.Y., and Green’s Farms.

Harris said a meeting with FRA officials about a month ago was “helpful.”

“They said it’s really a proposal and could be subject to change,” she said.

But Harris said there’s still concern about “the interpretation of the document and how much flexibility we have.”

At the swearing in of the Board of Selectmen at Greenwich Town Hall earlier this month, Greenwich resident Leora Levy, Republican National Committeewoman for Connecticut, was quoted in the Greenwich Free Press as saying the NEC Future high-speed rail proposal from New Rochelle to Green’s Farms is an “attempt by unelected outsiders that will adversely affect and threaten Greenwich.”

Darien First Selectman Jayme Stevenson said when the final NEC Future plan was released, there was  “plenty of concern” about the placement of new, additional tracks and how it would impact her town, which is served by commuter rail that is slowed by curvy tracks.

Since then, however, she’s been told Darien would have a say on how the plan is implemented.

“We have had extensive talks (with FRA) and have gotten assurances that any plan has to be approved by state and local government … that  nothing will be moving forward without the approval of the town of Darien,” Stevenson said.

While Fairfield County, with its numerous rail commuters, would benefit greatly from improved service, there is concern that the push for high speed rail is a bigger priority than improving commuter service.

Stevenson said she did not want Connecticut to be a “pass through” for speedier service to Boston.

“What I would like is ‘best-in-class’ commuter service – with high speed,” she said.

Fairfield First Selectman Mike Tetreau said he was not contacted in any way by the FRA before or after it released its massive rail overhaul proposal.

“Fairfield was not included in any meetings, or in the (FRA) distribution list,” Tetreau said. “It leaves major concerns about the approach going forward.”

Tetreau is also puzzled about why the FRA suggested “building out Greens Farms” rather than using the new, expanded Fairfield station as a transportation hub.

Like others in Fairfield County, Tetreau said the first priority is to upgrade the county’s commuter service. “The system is in a state of disrepair,” he said.

The FRA’s Willis said there have been numerous contacts and meetings with Fairfield County officials about the rail plan and said those who continue to be critical are “muddying the waters.”

“It is unfortunate they are doing that because some people see a need for improved rail,” Willis said.

Judd Everhart, spokesman for the Connecticut Department of Transportation, said state transportation Commissioner James Redeker has stressed that “the NEC Future track realignment proposal in southwestern CT was little more than a proposal on paper – for now anyway.”

“There is zero funding set aside for any kind of realignment of tracks through there, under the NEC Future ‘plan,’ nor are there any serious advocates for the idea, to my understanding,” Everhart said. “I am not aware of any towns that remain upset about the NEC Future proposal, nor are we hearing from legislators on the issue.”

Everhart said Redeker’s position “remains that the corridor should be maintained in a state of good repair and that any consideration of expansion or realignment should be deferred for the foreseeable future.”

But Gregory Stroud, executive director of SEcoast, a nonprofit formed to spearhead opposition to NEC Future’s plan to add new tracks in eastern Connecticut, said there will be a pressing need to overhaul the New Haven line soon, since the FRA predicts full capacity for trains on that line will be reached by 2030.

“Our position is not one of opposition, but of finding a solution that respects the communities,”  Stroud said.

The  goals of NEC Future include:

A map of the Federal Railroad Administration’s final plan for the Northeast Corridor.