With natural gas and fuel oil prices rising, more than 320,000 poor Connecticut households faced energy bills this year that exceeded their ability to pay by a collective $450 million, a new, nonprofit study has reported.

According to Operation Fuel, the energy affordability gap facing households with incomes below 200 percent of the federal poverty level has surged from $399 million one year ago.

Advocates for the poor and state legislators acknowledged the forces making energy unaffordable only are intensifying, as new pressures grow on state and federal energy funding.

“Because of the high cost of energy in Connecticut, we expect the energy affordability gap will continue to be hundreds of millions of dollars for at least the foreseeable future,” said Operation Fuel Director Brenda Watson. 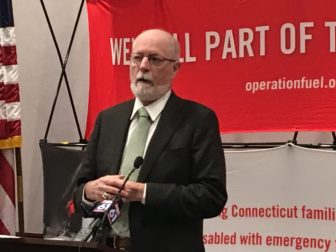 Connecticut’s only nonprofit emergency energy assistance program that offers assistance year round, Operation Fuel provided more than $3.3 million in aid to nearly 7,900 households over the past fiscal year.

The nonprofit projects annually the gap between the energy bills owed by Connecticut’s poorest households, and the utility bills they can afford.

The $450 million collective gap represents a shortfall of about $1,404 per household, Watson said. One year ago the margin was $1,241 per household.

Natural gas heating prices for residential customers, which were 12 percent higher last March than they were in March 2016 were a factor, as were fuel oil prices that rose 15 percent over the same period.

But Colton said there are other pressures threatening to expand the affordability gap.

The new two-year state budget drained about $85 million per year from energy conservation and efficiency programs.

The Connecticut Green Bank was one of the programs affected by that move. And Kerry O’Neil, vice president for residential programs for the Green Bank, said a key part of its mission is to support energy efficiency programs that assist low-income households.

Rep. Lonnie Reed, D-Branford, who is House chair of the Energy and Technology Committee, said there still are steps Connecticut can take to help — even though state finances are projected to struggle with deficits in the coming years.

Connecticut and other northeastern states, through better cooperation, can fight spiking energy costs rather than competing for scarce resources.

“I think the only way to deal with this comprehensively is not just as a state, but as a region,” Reed said.