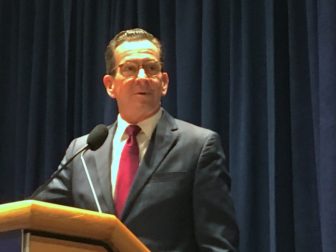 About to enter his final year in office, the governor also said one of his proudest-yet-most-painful accomplishments was funding pension obligations that many officials before him deferred and thereby magnified — at great expense.

“The reality is, in many ways, we’re our own worst enemies,” Malloy told about 300 business leaders gathered at the Hartford Marriott for the MetroHartford Alliance’s monthly breakfast meeting. “We know we haven’t done the right thing, but we’re afraid to change direction because it’s unpopular, it’s hard.”

The Democratic governor is pressing the General Assembly to begin closing a $208 million budget deficit — and to bolster a state transportation program otherwise headed for major contraction, deficits and insolvency in the coming years.

Malloy, who proposed a 30-year transportation rebuilding program in early 2015, said he has found plenty of legislators ready to discuss which transportation projects to fund.

But beyond dedicating roughly 1/13th of all sales tax receipts to transportation — enough only to cover initial planning in the first few years of the program — lawmakers have been less enthusiastic about ordering tolls or otherwise raising money for the initiative.

The administration warned Wall Street credit rating agencies earlier this month that — absent new funding — Connecticut would need to scrap some rail services, drive up fares, suspend 40 percent of planned capital projects and defer major highway rebuilds like the Hartford viaduct, over the next five years.

The governor said he is particularly fearful about the financial services sector based in Fairfield County — for which Connecticut faces constant competition from New York’s Westchester County and northern New Jersey.

Without investments in commuter rail and other transportation essentials, “We’re going to lose those jobs to Westchester and New Jersey on a regular basis. And yet we can’t get the legislature to act on those recommendations.”

Malloy added that the final year of his term and the first half of the next governor’s “have to be a period of constant self-evaluation” for all state officials “where Connecticut decides if we want to compete with Boston, or New York, or 49 other states, or the rest of the world.”

The business community can play a crucial role, the governor said, provided it understands that — given Connecticut’s other fiscal challenges — transportation can’t be addressed unless new revenues are raised. “You’ve got to bring it over the line,” he told business leaders.

State finances are projected to face increasing pressure over the next 15 years, and possibly longer, as required contributions to long-neglected retirement benefit programs surge dramatically.

Malloy: Budget ‘was out of balance before I signed it’

Malloy said he knew the new state budget “was out of balance before I signed it,” but did so nonetheless to end a debate that had dragged on for nine months — including four months into the new fiscal year. “We needed a budget,” he said.

Legislators had crafted that bipartisan budget without the participation of the governor or his staff and passed it by veto-proof margin.

It relies heavily on directives that Malloy find unprecedented savings in state spending after the budget is in force. The governor who already has begun to achieve those savings by ordering reductions in municipal aid, has drawn fire from lawmakers.

Now the governor is frustrated because the General Assembly has scheduled a special session right after Christmas — but not to mitigate the deficit. That session instead will be used to redirect about $54 million in funding from not-yet-defined sections of the budget to reverse cuts to a popular social services program, which uses Medicaid funds to help the low-income elderly and disabled pay medical expenses that Medicare doesn’t cover.

“We’ve demonstrated some level of discipline over the last seven years,” Malloy said, adding he is the first governor to make the full recommended contributions to all public-sector pension funds throughout his tenure.

The governor and lawmakers did agree this past January to realign payments into the state employee pension fund over the next three decades. Those payments, while rising dramatically in the near future, will not do so as sharply as originally projected until the mid-2030s. Payments after that point will be higher than originally forecast.

This was done to mitigate a projected spike in annual contributions from about $1.6 billion now to nearly $6.6 billion by 2032.

Malloy said he believes his administration significantly reformed the benefits that will be provided to future state employees and worked hard not to shift costs onto future generations.

“I don’t think any of that, by the way,” he added, “will be understood for years.”