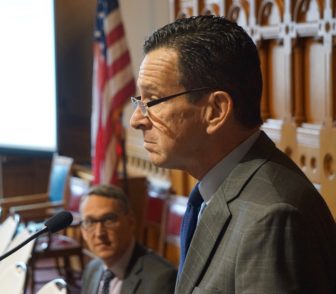 Gov. Dannel P. Malloy and Ben Barnes at a budget forum a year ago.

Gov. Dannel P. Malloy is welcoming legislators back to the State Capitol with a reprise of his message that it is folly to return in special session to restore funding for a popular Medicare Savings Program without addressing the larger issue of how to close a projected deficit of $222.5 million.

Knowing the legislature has no intention of acting on his deficit mitigation plan, Malloy asked them Thursday to do the next best thing: Don’t offset the $54 million in additional funding they plan to restore to the Medicare program with soft, unachievable cuts under the rubric of “other expenses.”

“If the legislature is convening a special session, they should take this opportunity to address the full deficit facing the state,” Malloy said. “Having said that, if their intention is to limit their action to only restoring eligibility for the Medicare Savings Plan, it’s imperative that the additional expenditure is offset with real and achievable spending cuts.”

Without releasing details, legislative leaders have said they have agreed on a bipartisan plan to restore funding for the Medicare program without adding to the deficit. The special session begins Friday, but no substantive action is expected before Jan. 4.

“Frankly, the last person I would take suggestions from at this point is Gov. Malloy and his administration,” Fasano said. “They have failed to keep businesses here, failed to protect our economy, failed our state’s transportation needs and failed to create any kind of stability for Connecticut. The governor and his administration need to sit back and let lawmakers do the driving.”

Malloy said the legislators must avoid a fix “that relies on overly optimistic savings or unrealistic lapses, which would only exacerbate the larger, looming budgetary challenge we face.”

The administration gave legislators a memo from Ben Barnes, who oversees the budget as the secretary of the Office of Policy Management. It warns against actions such as arbitrarily cutting overtime expenses without regard to whether those reductions are feasible.

Nearly 96 percent of the $198.2 million in overtime in fiscal 2017 was concentrated in five agencies with round-the-clock operations, led by the Department of Correction with $62 million and followed by the departments of Mental Health and Addiction Services ($48 million), Developmental Services ($43.6 million), Children and Families ($21.7 million) and Emergency Services and Public Protection ($14.6 million).

Fasano said the administration’s concerns are misplaced, at least as they apply to overtime.

“The administration’s memo is a lot of words from someone who is desperately trying to be relevant,” Fasano said. “Secretary Barnes’ ‘speculations’ are false. The bipartisan agreement to restore funding for the Medicare Savings Program does not rely on any overtime savings.”

Barnes also noted in his memo that MSP, the shorthand for the Medicare Savings Program, was made more generous in 2010 when the state raised income limits and eliminated an asset test.

“This has resulted in MSP enrollment increasing from a level of 69,970 in August 2009 to now over 161,000,” Barnes wrote. “The changes in the bipartisan budget are projected to eliminate eligibility for approximately 70,000 beneficiaries and reduce benefits for another 20,000.”

Barnes warned that it would be easy to cause worse problems in restoring the MSP funding.

“While it is clear why the cuts to MSP have been targeted for restoration, it is not clear that there are realistic alternatives that are not as bad or worse,” Barnes wrote. “However, given the precarious condition of the current bipartisan budget, coupled with the ominous projections for the coming years, we should encourage the legislature to find budget alternatives that can be successfully implemented within the state’s scarce resources, and not to rely on cuts which cannot be achieved in order to appear to have balanced the budget.”