Malloy to take one last shot at balancing CT’s books 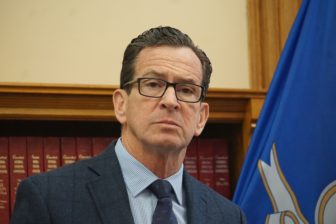 Gov. Dannel P. Malloy will use the final budget proposal of his tenure next week to urge lawmakers to close a $165 million gap in next fiscal year’s finances and mitigate much larger shortfalls facing his successor.

The governor has not disclosed how he would wipe out that red ink. Malloy’s budget proposals over the past two years have shown a preference for keeping income tax rates stable — but recommending modest increases by scaling back credits and exemptions.

The governor did suggest in December raising the sales tax rate from 6.35 percent to 6.9 percent, and setting a 7 percent rate on restaurant transactions, to mitigate a shortfall in the current fiscal year. But he generally has limited his proposals for the second-largest tax to eliminating exemptions.

“Our fiscal future is challenging for us, just as it has been for the last few years,” Susan Weisselberg, deputy secretary of the Office of Policy and Management, said during a budget forum Tuesday, adding fiscal stability is crucial to maintain improving economic growth. “That path of (budgetary) predictability is important not only for residents but for our businesses.”

The governor, who is not running for reelection, must recommend budget adjustments for the 2018-19 fiscal year to the legislature no later than Wednesday. This time he has to close a deficit in a plan he never fully embraced.

As both parties struggled for nearly nine months in 2017 to adopt a new, two-year state budget, legislative leaders ultimately excluded the Malloy administration from the final six weeks of bipartisan talks.

Malloy signed into law the budget that narrowly passed in late October — saying the stalemate had to end — but argued the plan was flawed on several grounds.

It orders the governor to find unprecedented levels of savings after the budget is in force, about $880 million in the General Fund this fiscal year and a whopping $1.09 billion in 2018-19.

It raids more than $290 million in the first year and $250 million in the second from specialized accounts and one-time sources. And hundreds of millions in sales tax receipts previously promised to municipalities no longer would be delivered. 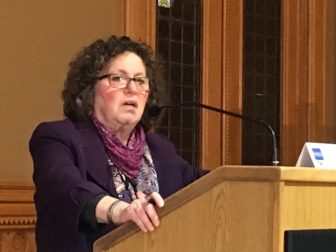 One example of those raids involves $87.5 million drawn each year from energy conservation programs, mostly involving funds the state raised through surcharges on consumers’ monthly utility bills. That includes $14 million per year from the Connecticut Green Bank, which uses money from consumer surcharges to leverage big private investments in clean energy.

Further complicating matters, most hospitals are contesting increases in state payments to them for treating poor, underinsured patients. The administration says this could jeopardize efforts to win federal approval for a new hospital taxing arrangement that would leverage hundreds of millions of dollars in new federal money annually to help both state government and the industry.

A Jan. 16 report from state analysts downgraded expectations for revenues in that period, creating the $165 million gap between that forecast and the level of approved spending.

That’s the hole the governor must address in his plan next week.

“While the details of the governor’s proposal will be released next week, it can be safely assumed the proposal will be based upon realistic and achievable recommendations to legislators for bringing the bipartisan budget into balance while addressing its deficiencies in FY19 and the out-years,” said Chris McClure, spokesman for governor’s budget office.

Nonpartisan analysts project much larger gaps are built into state finances in the first two-year budget that the new governor and legislature must begin crafting 12 months from now.

In budget proposals last year, the governor proposed eliminating the $200 property tax credit within the income tax system, which had distributed about $106 million per year to middle-income households.

Legislators in the new budget limited that credit only to seniors and to middle-income households with dependents. But the credit still costs the state about $50 million per year.

Last December in a deficit-mitigation plan, the governor suggested removing the sales tax exemption for nonprescription medicines to raise $5.8 million this fiscal year and $17 million next fiscal year.

Another revenue-raising option Malloy pitched on several occasions last year involved requiring cities and towns to cover a portion of the fastest-growing major line item in the state budget, the contribution to the teachers’ pension fund. 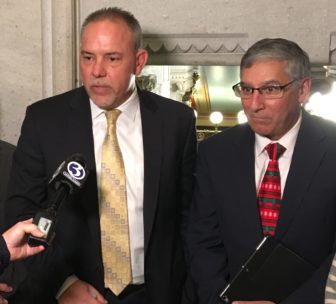 That line item, which stood at $1 billion last fiscal year and approaches $1.3 billion now, could go higher than $6.2 billion by 2032 according to one report prepared for the administration. That’s due largely to more than seven decades of inadequate state payments into the fund.

Malloy suggested last year that cities and towns cover as much as one-third of that cost, but lawmakers from both parties objected.

Sources said the governor’s plan next week will not recommend billing municipalities for teacher pension costs.

But Weisselberg said this week that there will be a plan to restructure those costs, just as the governor and unions crafted a plan to realign contributions into the state employees’ pension one year ago.

Connecticut will contribute less than originally projected into the state employees’ fund between now and 2032, making up those funds and more between that date and 2047. Estimates are this would shift $14 billion to $21 billion onto future taxpayers.

Any proposal to realign contributions to the teachers’ pension is expected to draw heavy scrutiny, though, because Connecticut doesn’t have the same legal flexibility to restructure payments into the teachers pension fund.

When the state borrowed $2 billion in 2008 to shore up the teachers’ pension system, it pledged to its bond investors not to short-change pension contributions for the life of the 25-year bond issuance.

The state’s bond counsel, Day Pitney of Hartford, spelled this out in an opinion provided in late April 2016. And state Treasurer Denise L. Nappier has said she agrees.

Legislative leaders: We will fix the budget

House Minority Leader Themis Klarides, R-Derby, said her caucus is committed to developing a plan that does not raise taxes to rebalance 2018-19 finances.

“If there is a deficit, then we will fix it,” she said. “There’s been enough kicking the can down the road for years.” 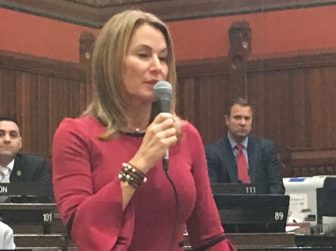 The Republican leader also said there is something of a double standard at play if the Democratic governor is decrying fiscal gimmicks.

“It is hypocrisy at its best,” Klarides said. “Now they’ve found religion when it comes to being fiscally responsible?”

Republicans have criticized Malloy on numerous occasions for past budget proposals that:

Klarides said she expects legislators to attempt to craft a bipartisan fix to the budget in the same spirit of cooperation they employed last fall, and House Speaker Joe Aresimowicz, D-Berlin, said he agrees.

“I am also hopeful,” he said. “It really did work last year.”

Senate Republican leader Len Fasano of North Haven said he also anticipates bipartisan talks. And while his preference is not to raise taxes, he doesn’t want to enter those talks with a fixed position.

At a recent forum, business leaders said “they were very encouraged that we tried very hard to reach a bipartisan deal last session,” Fasano said. “If we can do that again, that’s great.”

Malloy already disclosed arguably the largest component of his new budget earlier this week when he announced he would seek approval to establish electronic tolling on highways and to phase a seven-cents increase onto the state’s 25-cents-per-gallon retail gasoline tax over four years.

“We stand at a crossroads in Connecticut,” the governor said Wednesday. “We need to make a decision, and we need to make it soon.”

The Malloy administration warned Wall Street credit rating agencies in November that the new state budget shortchanges the transportation program. Absent more funding, the program is headed for dramatic contraction over the next five years.

The administration outlined nearly 400 capital projects worth $4.3 billion that would be suspended over the next five years because of inadequate funding.

The alternative to all of these cutbacks, according to the administration, is a series of annual deficits in the transportation program starting with the fiscal year that begins July 1. The transportation fund would reach insolvency by mid-2020.