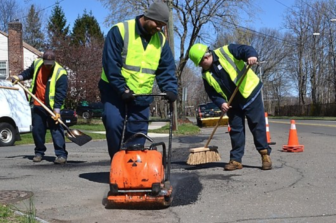 But the prospects of any immediate release of the stalled $30 million in Town Aid Road grants seemed dim, given that Gov. Dannel P. Malloy and the legislature still have no agreement on the future of the state’s struggling Special Transportation Fund.

The Connecticut Conference of Municipalities and the state’s Council of Small Towns both urged officials to hasten the release of funds communities normally would have received in January.

“With additional late winter snowfalls, the stress on public works and snow removal budgets will only heighten,” CCM spokesman Kevin Maloney said. “That situation, combined with the continued delay in promised and budgeted state aid for local road repairs does not bode well for the condition of local roads this spring.”

Many communities use the Town Aid Road grant not only to fund local road repairs, but also to cover snow removal costs.

“Towns have to go out to bid and enter into contracts now to begin to move forward with projects in the spring,” said Betsy Gara, executive director of COST. “The uncertainty regarding whether Town Aid Road grants will be released is forcing towns to defer needed road maintenance projects, which will lead to higher repair costs down the line.”

Gara and Maloney both noted that stalled roadwork also would be a detriment to the local construction industry in many communities.

The road repair grants have become entangled in a larger dispute over the future of Connecticut’s transportation program.

The state budgeted $60 million in TAR grants for the full fiscal year. Normally it delivers half those funds in July and the remainder in January. Connecticut borrows the funds, financing the grant payments through the sale of bonds on Wall Street.

But several factors have interfered with the normal flow of road repair funds to cities and towns.

The legislature did not adopt a new budget for this fiscal year until late October. The State Bond Commission approved bonding for the first $30 million installment at its Nov. 29 meeting.

But Malloy also warned legislators, Wall Street and others in November that the Special Transportation Program — and Connecticut’s aging, overcrowded infrastructure — is on the brink of a fiscal crisis.

Absent more funding, the administration says, the state would need to scrap some rail services; drive up rail and bus fares; suspend 40 percent of planned capital projects, including major highway rebuilds like the Hartford viaduct; and possibly suspend TAR grants to remain solvent over the next five years. It also warned some changes would begin this year.

Malloy has asked lawmakers to add seven cents to Connecticut’s 25-cents-per-gallon retail gasoline tax, and to order electronic tolling on highways. The latter, if approved, probably would not yield major revenue until the 2021-22 fiscal year, the administration says.

The governor, whose budget office sets the State Bond Commission agenda, did not include the second installment of TAR grants on its March 16 agenda.

Malloy said at the time that he could not justify financing more road repair grants for towns when the administration had just canceled or delayed $4.3 billion worth of state projects, including the upgrades to the elevated section of Interstate 84 in Hartford as well as the junction of I-84 and Route 8 in Waterbury, commonly known as the “mixmaster.”

And as of Wednesday, it seemed both Malloy and legislative leaders had not changed their positions.

The governor said “we’re certainly cognizant of their [municipal leaders’] desire” for more assistance, but added the state has its own pressing fiscal challenges and lawmakers must address that first.

I’m willing to trade our costs and expenses of the three storms with any municipality right now,” he said.  “Obviously what’s important is that we have a balanced budget, which we don’t have currently.”

“What local officials have told us repeatedly regarding municipal aid is ‘please don’t cut us in mid-year,’” Klarides said. “We know that towns and cities can better manage their finances than the state of Connecticut, but it is patently unfair to force them to adjust, once again, in the middle or at the end of the fiscal year.”

“If Republicans were in charge of this building, I would guarantee that a promise for Town Aid Road would never have been broken,” Fasano said. “The Republican budget that was vetoed last year would have fully funded Town Aid Road as well as preserved municipal aid, provided mandate relief and increased education funding by over $60 million. … It’s time for CCM to put the pressure on the administration responsible for the challenges towns and cities face today.”

Senate President Pro Tem Martin M. Looney, a Democrat from New Haven, also said through a spokesman that the governor should release the funding now. 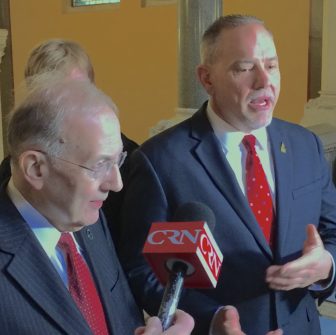 “Town Aid Road was included in the bipartisan budget because municipalities rely on the funding for local paving projects and snow removal,” Senate Democratic caucus spokesman Adam Joseph said.  “The three significant late-season storms are straining the budgets of cities and towns. We hope that the governor and the Office of Policy and Management will include the funding on the next agenda of the State Bond Commission.”

The next meeting is scheduled for March 29, but no agenda has been posted to date.

House Speaker Joe Aresimowicz, D-Berlin, has said he wants the House to vote this spring on the governor’s proposal, but has been cautious not to predict an outcome.

Tolls have been a hot-button issue in Connecticut politics for decades, and this is a state election year. Democrats hold a slim 80-71 edge in the House, and the Senate is split evenly 18-18.

“A solid partnership between the state and our municipalities is critical to both our economy and overall quality of life, and local road aid is an important part of that commitment,” the speaker said. “I expect the budgeted funding to be forthcoming and am not sure what the holdup is.”

But Aresimowicz added that, “Like the state, each town must prioritize their projects in these challenging fiscal times, including looking at reserve accounts to help bridge the gap.”