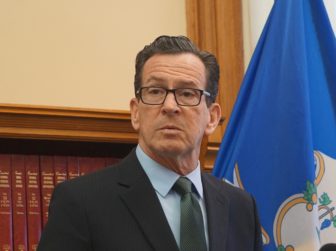 Gov. Dannel P. Malloy on Friday vetoed a bill that would have prohibited him or future governors  from cutting education-cost sharing grants to cities and towns as a means of addressing a budget shortfall that develops during the fiscal year.

He also allowed a bill to become law without his signature, a first for the governor. The new law he declined to sign allows pregnant women to purchase health insurance from Access Health CT outside the enrollment period.

“This bill would prevent any future governor from making rescissions to certain municipal grants without regard to communities’ relative need or ability to fund their own spending decisions, and without regard to the seriousness of a financial emergency in the state,” Malloy said in his veto message. “In doing so, it would help the wealthiest cities, towns, and residents at the expense of the poorest.”

By law, the governor has limited authority to unilaterally make budget cuts known as rescissions when there is a general-fund shortfall of more than one percent of appropriations. He generally can make cuts of up to five percent of an appropriation account.

“It is understandable that legislators wish to provide more certainty to the municipalities and school districts that they represent,” Malloy wrote. “This bill, however, takes a misguided approach. If the legislature wishes to provide additional stability and predictability to cities and towns in formulating their budgets, the best way to do so is to pass a state budget that identifies specific savings or additional revenue to pay for the level of assistance it wishes to provide.”

In recent years, the legislature has left to the governor the task of making unspecified cuts to balance the budget, rather than specifying specific savings. Malloy has justified cuts to wealthy communities, saying they can afford to absorb the relatively small loss of funds.

“It is indisputable that our current distribution methods for state aid to local governments favor our most affluent communities,” he wrote. “This is even more egregiously true if we consider the more than $1 billion in state support for local teacher pensions that is provided with no consideration of ability to pay.”

“Today the governor decided to veto an important, bipartisan bill that gives all our towns and cities and local property taxpayers the stability and predictability they deserve,” Fasano said. “It is not about helping some towns and not others, as the ever divisive governor is claiming. It is a bill that will help all towns and cities, all schools and children and all taxpayers who are hurt by mid year budget cuts issued unilaterally by a governor.”

The health measure was unusual in that it allows women to get health coverage for pregnancies after becoming pregnant. The bill makes pregnancy a “qualifying life event,” like the birth of a child or a job loss, so expectant mothers could enroll in individual health insurance plans outside of the yearly open enrollment period.

It requires certain insurance plans to provide a special enrollment period to eligible pregnant women who do not have insurance that covers the minimum essential  healthy benefits required by the Affordable Care Act.

It is indisputable that our current distribution methods for state aid to local governments favor our most affluent communities.
Gov. Dannel Malloy

“As Governor, I have never before allowed a bill to become law without my signature. I am choosing to do so now with clear intention and purpose,” he wrote to lawmakers. “First, I wish to draw special attention to certain issues relating to our health insurance exchange, and how we can best position it for long-term growth and viability. And second, I hope to engage with you in a conversation about how changes in benefits mandated by state law can affect rates paid by Connecticut consumers, and the resulting impact on our local insurance industry.”

“To begin, while this bill is undoubtedly admirable in its public policy goal, it gives me concern for the future stability of our insurance marketplace. The foundational philosophy underlying the Affordable Care Act is that individuals should be insured at all times, not just when an individual needs to utilize insurance. This is why enrollment periods and the individual mandate were originally implemented and why I requested that we create our own individual mandate, as our neighbors in New Jersey did recently.”

Malloy said the bill weakens a fundament tenet of health insurance — the principle of spreading and pooling risk.

“Permitting the diagnosis of a health condition to be a triggering event for a special enrollment period has a disproportionate effect on the insurance risk pool, increasing the costs for every single person seeking to purchase insurance in the individual market,” he wrote. “Research tells us that cost is the greatest barrier to acquiring and maintaining health insurance, and we must carefully consider any public policy that increases health insurance premiums.”

Malloy said the bill will increase annual costs by $70 per person.

“The governor has reached a new low by putting divisive politics before women’s rights,” he said. “He is a hypocrite. For someone who claims he is a champion for women his flat out refusal to sign a common sense bill to help pregnant women access prenatal care shows his true colors. This bill helps women and their babies who are vulnerable to risky pregnancies and complications throughout their entire lives because they have to wait until their babies are born before they can obtain health insurance. It’s not right.”