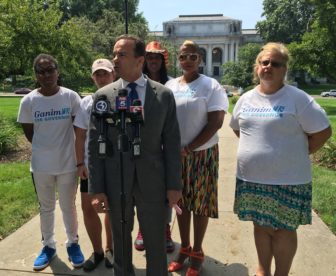 Bridgeport Mayor Joe Ganim called for an amendment to the Connecticut Constitution to reinforce a longstanding statue legalizing women’s right to an abortion.

His rival for the Democratic nomination, Greenwich businessman Ned Lamont, offered a multi-pronged strategy to resist what he called the steady weakening of environmental standards by the Trump administration, adding they pose a threat to Connecticut’s physical and economic health.

“This is a huge challenge and this Trump administration has taken no prisoners, so to speak,” Ganim said during a noon press conference outside the state Capitol. “They are going for the extreme and they will do it bluntly and boldly, and control that court with this new appointment in many ways.”

The Bridgeport mayor said incorporating the current state statute into the state constitution would combat the the passage of federal laws or the Supreme Court’s potential overturning of the landmark Roe v. Wade decision, which legalized abortion.

Nine other states have added abortion protections to their constitution—Alaska, California, Florida, Iowa, Massachusetts, Minnesota, Montana, New Jersey, and New Mexico, according to the Center for Reproductive Rights.

In Connecticut, enshrining a woman’s right to terminate a pregnancy would require 75 percent of the members in both the state House and Senate to approve a proposal to put it before voters in the following election. Lawmakers could still send the measure to the ballot box without meeting that threshold if a simple majority approves it during two successive legislative terms.

For example, if the 2018-19 legislature approved the proposed amendment by a simple majority in both chambers, the matter would have to come back in the next legislative term, which begins in 2020. If adopted a second time, even by a simple majority, it would be placed on the next state ballot.

Ganim said pursuing the measure would be worth the effort despite a potential years-long battle. The candidate also called for the state to preserve access and funding to affordable health care, citing the need to fight federal gag orders on women’s health clinics. That rule bars federal family planning funding for organizations that provide abortions or make referrals. 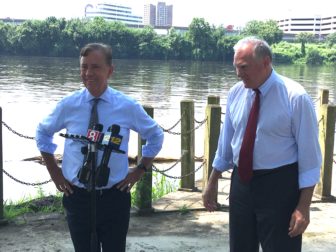 Meanwhile, Lamont said during an early afternoon press conference along the Connecticut River in East Hartford that the environmental stakes for Connecticut are huge given the Trump agenda.

“We do have to draw a line in the sand when it comes to issues like this, Lamont said. “Connecticut is at the end of the tailpipe when it comes to all of the emissions coming from the great Midwestern plants  and the Southern plants.”

Further complicating matters, Lamont said, is that the Trump changes are not necessary. Major corporations “know what the (environmental) rules are and have invested accordingly,” he said.

Attorney General George Jepsen, who has endorsed Lamont and joined him at the press conference, said “the impact taken over a generation from 2020 to 2050 — if Trump is allowed to do what he says he wants to do — would be enormous.”

Nationally the changes would cause more than $450 billion in economic damage over the period, Jepsen said, primarily through increased consumer spending on motor fuels.

Jepsen’s office has been working with a multi-state coalition and preparing testimony to the U.S. Environmental Protection Agency to oppose many of the changes Trump is seeking. And Jepsen, who is not seeking re-election this fall, said Connecticut’s next governor and attorney general may have to go to court in the coming months to oppose many of the Trump policies.

Lamont said he would support that action. “We must make sure we hold the president’s feet to the fire,” he said.

Lamont also said he would support state incentives to encourage greater consumer use of electric cars and other high-fuel-efficiency vehicles.

“Public transportation also has got to be a key priority for us,” he said, adding that means more frequent and regular rail and bus transit service.