The Kavanaugh allegation dominates the week

A sexual assault allegation against Supreme Court nominee Brett Kavanaugh dominated the national news last week and brought into stark relief the differences between how men and women – and Democrats and Republicans — view the controversy and the broader and politically tricky issue it represents.

To President Donald Trump, the subject himself of multiple claims of sexual misconduct, university professor Christine Blasey Ford, 15 years old at the time, would have filed charges with the police immediately if the attack she suffered (and which Kavanaugh has unequivocally denied) were as traumatic as she claimed.

But Connecticut women who were raped and abused were not at all surprised that Ford did not come forward for more than three decades and until her alleged attacker was about to be placed permanently on the nation’s highest court. Wethersfield resident Lindsey Jones, brought before the public by Sen. Richard Blumenthal on Thursday, said she did not report that she was attacked because no one would believe her – “the least important person in my life story.”

As negotiations took place between Ford and Senate Republicans over when or whether Ford would testify before the Judiciary Committee, the faculty at Kavanaugh’s alma mater Yale Law School urged that a “neutral fact-finder” be appointed to investigate the allegation.

In Hartford, the prevalence of sexual harassment at the State Capitol complex revealed by a recent survey (nearly a quarter of the respondents said they had experienced sexual harassment — some of it from the lawmakers themselves) inspired officials to tighten their behavior policy and protocols.

Also at the State Capitol there were plenty of signs that Gov. Dannel Malloy is approaching the end of his tenure, which is only a few months away. His longtime budget director Ben Barnes was reported to be among a short list of candidates for a similar vacant post at the state’s system of colleges and universities.

For his part, Malloy took some time Thursday to defend the millions in state borrowing done during his tenure to improve housing , transportation, education and other things “that make Connecticut a great place.”

Department of Correction health care workers – apparently perceiving that it is as important to influence the next governor as the current one – stood in the rain last Wednesday demanding of gubernatorial and legislative candidates that they fill job vacancies that are undermining quality inmate care.

Finding funds to do anything, of course, is going to be tricky for whomever gets elected, even though tax revenue has recently been exceeding expectations, resulting in a potential $2 billion surplus a year from now. The big problem, which neither Democrat Ned Lamont or Republican Bob Stefanowski have to date addressed, is how to respond to a projected $4.6 billion deficit facing the state over the next two years.

Lamont has criticized Stefanowski’s claim that he will phase out the state income tax over the next eight years, but is proposing to eliminate or reduce three kinds of business taxes as a way to create jobs. He also wants to make college free to military veterans by exempting them from student fees a public universities – a measure that has been estimated to cost $5 million a year. 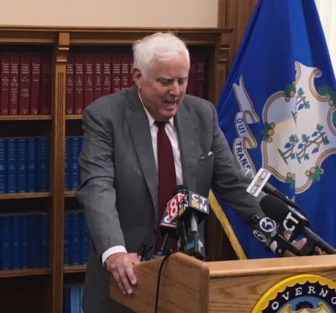 There are more serious cyber issues to consider, however. According to Arthur House, Connecticut’s chief of cyber security, Connecticut’s electric, natural gas and water infrastructure are under constant cyber attack from every corner of the world.

The opioid crisis also continues unabated, and doctors say one tool for combating it — a statewide health information exchange — would really be helpful.  After a decade of trying and an expense of $23 million, officials have been unable to create one, though say they are closer than ever.