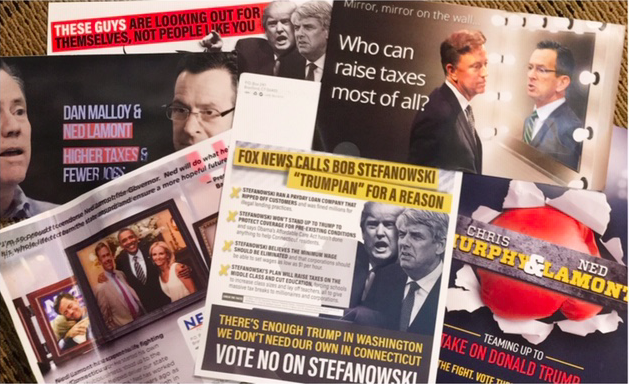 Buffeted by conflicting state and national political currents, Connecticut voters go to the polls today to cast votes for statewide and legislative candidates, many who have tied their fortunes to how the electorate feels about two men not on the ballot, Gov. Dannel P. Malloy and President Donald J. Trump.

The potential for Malloy and Trump to influence the open race for governor and dozens of competitive down ballot contests is ironic, given recent history. Since Barack Obama helped Democrats win super majorities in the General Assembly a decade ago, Connecticut legislative races have been oddly immune to the influence from top-of-the-ticket candidates.

“This is an extraordinarily odd year,” said Senate Republican Leader Len Fasano of North Haven, who says lawmakers have struggled at times to find issues that cut across geographic and demographic lines. “Is it Trump? Is it Malloy? Is it taxes? Is the concern about health care? Is it women’s issues?”

The gold standard of Republican advertising has been to use photographs of Democratic candidates with Malloy. Where none exist, they are photoshopped — in one case, placing Malloy into a doctored photo from a lawmaker’s wedding. For Democrats, Trump has been an organizing principle since his inaugural last year.

U.S. Sen. Chris Murphy, a Democrat seeking his second term, devised a coordinated campaign for the state party after Trump took office last year, using his campaign funds as seed money and the president as a rallying point. It is called, “Fight Back Connecticut.”

In West Hartford, at one of the stops Murphy made Monday with Democratic gubernatorial nominee Ned Lamont, Democrats said the effort has produced 100,000 contacts with voters in a community of 60,000, a return of absentee ballots up 33 percent over the 2014 midterm election, and more than 200 turning out for door-to-door canvassing over the weekend.

“I wish Donald Trump could be in this room to see what he has energized in West Hartford, Connecticut,” said state Sen. Beth Bye of West Hartford, standing in the Prospect Cafe, which was packed with Democratic volunteers. They cheered. 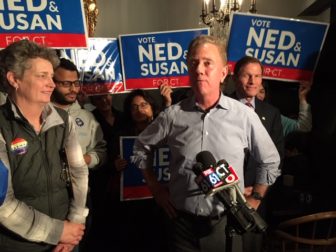 State Rep. Derek Slap, D-West Hartford, who is running unopposed, said Lamont will be boosted by the turnout generated by legislative candidates, many of whom are backed by new activists inspired by opposition to Trump.

On televisions over the bar flashed an endless stream of campaign commercials, many featuring Malloy and Trump.

“Ned and I have been out there all day in the rain,” Murphy told the volunteers. “We are a team, because Donald Trump and Bob Stefanowski are a team, right?”

Stefanowski, the Republican gubernatorial nominee, joined the rest of the field in praising the president and his economic policies while seeking the GOP nomination, and he was endorsed by Trump soon after winning the primary in August. Since then, Stefanowski has largely dodged questions about the president.

“I’ll continue to say I like his economic policy,” Stefanowski said after a Facebook Live chat at the office of New Britain Mayor Erin Stewart.“I’ve never met him. I’ve never spoken to him. I’ve never been in the Oval Office.”

But Trump is rarely out of the news.

On Monday, NBC, Fox and Facebook rejected an ad created by Trump’s campaign committee that tied the caravan of asylum seekers slowly traversing Mexico to the U.S. to a murder by an undocumented Mexican immigrant. The racially charged ad falsely claimed that the defendant had been let into the country by Democrats.

“What happened today? The major news networks today took down, off the air, an advertisement that was submitted to them by the president of the United States, because it was a racist ad,” Murphy said. “Think of the political state that we are in today. And what does Bob Stefanowski say about that? Nothing!”

Lamont mocked Stefanowski for his reluctance to talk about Trump, gay marriage, women’s rights, gun control or pretty much anything other than the state budget and economy.

Stefanowski registered as a Democrat in October 2016 after an audio was found of Trump boasting about his ability as a celebrity to molest women with impunity, then switched his affiliation back to Republican three months before opening a campaign committee in September 2017. He never has explained the switch or why he cast no vote for president in 2016.

He expressed mild disapproval of the president’s rhetoric Monday, but he said he will not be distracted. 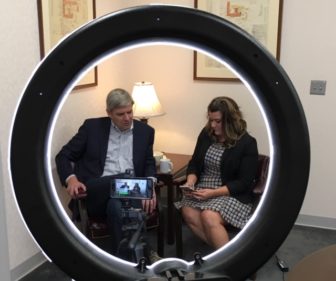 “I don’t like the rhetoric,” Stefanowski said. “I’ve got three daughters. I don’t like some of the things he says about women, but I’m not going to get drug into that territory. I’m not running on a social agenda. [The issues] people are concerned about are in Connecticut. If Ned is concerned about Washington, he should have run for Senate again.”

Stefanowski and legislative Republicans said that Malloy, who is leaving office after eight years, is more relevant to a debate on the fiscal and economic ails of Connecticut.

“So people say Malloy is not on the ballot,” Stefanowski said. “That’s fine. He’s not. But his economic policy is on the ballot.”

House Minority Leader Themis Klarides, R-Derby, and Fasano agree, saying he is fair game to include in GOP legislative advertising.

Fasano and Klarides both spoke at a Stefanowski rally on Sunday. Fasano recalled Malloy’s first inaugural address in January 2011, when the governor quoted Robert Frost’s poem, “The Road Not Taken,” specifically the quote: “Two roads diverged in a wood, and I took the one less traveled by, And that has made all the difference.”

“I think we all know why that path has been ‘less traveled,’” Fasano said. “Because it doesn’t work. Bob Stefanowski says that road is closed.“

Republicans won just 37 of the 151 seats in the House and 12 of the 36 in the Senate when Barack Obama was elected president in 2008 — the last time a president had coattails boosting down-ballot candidates.

Now, the Democratic and Republican leaders of the tied Senate shrug when asked to read how the prevailing currents might blow today. Conservatively, at least a quarter of the 36 Senate races are seen as competitive.

Republicans hope to flip seats being vacated by Gayle Slossberg of Milford and Ted Kennedy Jr. of Branford and have targeted an incumbent, Steve Cassano of Manchester. The Democrats are contesting the seat being vacated by Republican Art Linares of Westbrook, and have hopes for a second open seat, the one held by Joe Markley, the GOP nominee for lieutenant governor.

Four other Republican incumbents are in competitive races: Len Suzio of Meriden and George Logan of Ansonia, each of whom unseated Democrats in 2016, and Michael McLachlan of Danbury and Toni Boucher of Wilton. McLachlan, a conservative, is being challenged by Julie Kushner, a recently retired leader of the UAW. Boucher is facing a surprisingly strong fight from 22-year-old Will Haskell.

“There are more actively contested races in more parts of the state,” said Senate President Pro Tem Martin M.Looney, D-New Haven. “I see the range. We could come back with a majority of several, or be short — or be where we are now.”