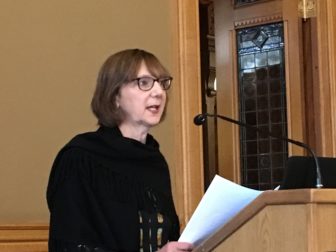 Social services advocates warned Thursday that a series of new caps in the state budget could dramatically drain resources away from education, other services for children, and local aid over the next decade.

Analysts for Connecticut Voices for Children, a New Haven-based policy research group, also cautioned that these caps could promote a shift in tax burdens from the wealthy to the middle class and poor.

“Our kids need to imagine a world where their success seems attainable,” Sharon Langer, interim executive director for Connecticut Voices, said at the group’s annual budget forum at the Capitol. But while nurturing children is one of the state’s top priorities, she added, this goal “is seriously undermined by the way we budget.”

Langer and her colleagues homed in on four new fiscal restraints initially adopted through a bipartisan compromise in November 2017.

Not only are these caps “among the most restrictive in the country,” they undermine fairness in a budget that long has been moving in the wrong direction, said Jamie Mills, director of fiscal policy for Connecticut Voices.

About 40 percent of the state’s budget in 1992 was dedicated to education, health care and other programs that affect children, while the ratio now is about 29 percent, Mills said.

Much of that deterioration is due to surging pension and other retirement benefit costs — a problem created by more than seven decades of inadequate state savings and one expected to grow much worse between now and the mid-2030s. 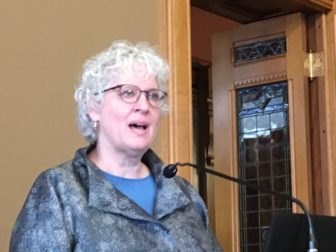 And as this pension debt grows, these new budgetary caps will constrain overall spending, effectively choking off resources for vital programs and services.

Besides new caps on spending and borrowing, legislators also enacted a “volatility” cap that forces the state to save excess income tax proceeds tied to capital gains and other investment income above a threshold level. Lawmakers can circumvent this cap, but only if 60 percent of the House and Senate vote to do so — a difficult bar to reach.

Collectively, these caps “reduce the legislature’s ability to make long-term plans,” said Liz McNichol, a senior budget fellow for the Center on Budget and Policy Priorities, a Washington, D.C.-based research center that worked with Connecticut Voices to analyze these fiscal restraints.

The volatility cap makes it very difficult to spend surging income tax receipts, even during a recession when the demand for social services typically is high, McNichol said.

It also may create “an incentive to raise taxes other than the income tax,” shifting tax burdens on low- and moderate-income households, McNichol added.

Connecticut’s income tax is more progressive than its other levies, meaning those earning more pay at a higher rate. But if it becomes problematic to spend income tax receipts — because excess proceeds must be saved in the budget reserve — lawmakers might turn to the sales tax, which imposes the same rate on consumers regardless of their incomes.

State Comptroller Kevin P. Lembo, who has advocated for greater savings in state budgeting for years, said the current system has less flexibility than he originally envisioned.

Lembo had recommended a formula that would require a more gradual approach to savings, analyzing revenue trends over a 10-year period. 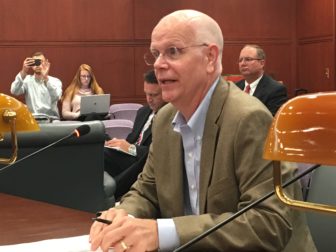 The current system mandates any income tax receipts tied to quarterly filings — which largely reflect capital gains and other investment earnings — in excess of $3.15 billion must be saved. That threshold number is adjusted annually to reflect growth in personal income.

“There is already murmuring in this building about how do we get out from what we did in 2017” with these budgetary caps? Lembo said.

Meanwhile, the spending cap could have a devastating effect on vital programs in the next decade, according to Rachel Silbermann, a fiscal policy fellow with Connecticut Voices.

This cap, unlike an earlier spending cap, no longer exempts aid to Connecticut’s poorest cities and towns. And in 2022 and 2026, annual contributions into the state employees’ and teachers’ pensions, respectively, also become subject to the cap.

As retirement benefit costs explode — faster than revenues or allowable spending under the cap can grow — economic and racial inequality, already high in Connecticut, could grow worse, Silbermann said.

Deputy House Minority Leader Vincent Candelora, R-North Branford, said that while the caps do create challenges, they have forced Connecticut to address a larger problem.

For years, Candelora said, legislators would take an occasional surge in state income tax receipts and order spending on the assumption that this revenue growth was going to happen year-after-year.

“It was something our legislature really didn’t have an appreciation for,” he said, adding it created a “level of desperation that we’ve really got to get our fiscal house in order.”

The positive side of these caps, he added, is that it is forcing state officials to begin to plan how it will manage these surging pension costs over the next decade.