For the second time, health program for CT seniors in the budget bulls-eye

Elizabeth Brandt lives modestly on the income she receives from Social Security, drives a 16-year-old car and has to tap savings for unexpected costs, such as the hearing aids she needs to fully participate in conversations.

But Gov. Ned Lamont says people like Brandt have saved too much money to benefit from a health program for low-income seniors.

He proposes to implement an asset test for the Medicare Savings program, a joint federal-state program that helps Brandt and about 180,000 other older, low-income seniors in Connecticut pay for services Medicare doesn’t.

The Lamont administration believes implementing the asset test on these seniors, effective July 2020, will take about 18,000 of them off the Medicare Savings rolls and save the state about $25.6 million.

“I have those assets because I’ve sacrificed and I’ve saved.”

Brandt, 73, a retired social worker says the plan makes no sense, since it would penalize individuals with very few assets. The proposed asset cap under the plan is $7,730 for individuals and $11,600 for couples.

The value of a home, a car, personal possessions and a limited amount for funeral and burial expenses would be exempt from the test. But all other assets, including money in a savings or checking account, IRA or 401k would be counted.

Brandt said low-income seniors need to have more savings than the asset test would allow to guard against financial hardships.

Besides the thousands of dollars she spent on hearing aids, Brandt said her dental bills and other, unexpected and unbudgeted expenses are paid out of her savings, because her income from Social Security is consumed by rent, food and other things.

She also said the money she has in the bank is the result of years of careful budgeting and “going without.”

“I have those assets because I’ve sacrificed and I’ve saved,” Brandt said.

Anna Doroghazi of AARP Connecticut is among the advocates for the elderly who are lobbying against the attempt to cut eligibility for the Medicare Savings Program.

“These aren’t wealthy folks,” she said of the beneficiaries. “And we have high rent, high taxes and high utilities.”

The Medicare Savings program gives qualified low-income and disabled Medicare recipients some of the benefits of the Medicaid program, a joint federal-state health plan for the poor.

All beneficiaries receive full subsidies for their Medicare Part B premiums — about $135 a month — and coverage of most Medicare co-pays and deductibles.

Those with lower incomes, no more than 135 percent of the federal poverty level, also qualify for the federal government’s Low-Income Subsidy, which provides generous prescription drug benefits.

AARP Connecticut estimates that older Americans take an average of 4.5 prescription medications each month, and those costs can add up quickly. AARP also estimates that the Low-Income Subsidy saves seniors an estimated $4,900 per year on expenses related to prescription drugs. 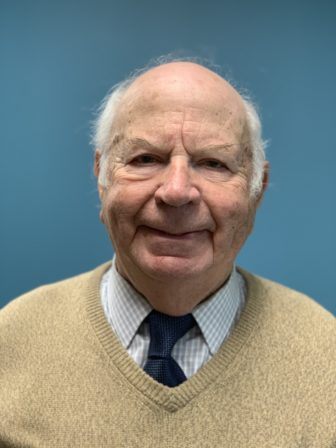 Richard Glendenning is one of thousands of Connecticut seniors who could be dropped from a program that helps them pay for health care expenses under Gov. Ned Lamont’s budget plan.

Richard Glendenning, 85, a retired electrician and Korean War veteran, said the Medicare Savings program allows him to keep an extra $135 a month that he would have otherwise paid in Part B premiums. Glendenning’s main income comes from his Social Security benefits, which would be cut by $135 a month if he loses eligibility for the Medicare Savings program.

“That would hurt me because I’d have less money to pay my bills,” he said.

Having lived in the same house in Stamford for 46 years, Glendenning has paid off the mortgage and says he does most of the repairs needed on his home himself. But annual property taxes on the home exceed $6,000, and he could not pay those and other expenses like dental care if his savings were capped at $7,730.

“You can’t exist on (those savings) and have a house,” Glendenning said.

Nathalie Taranto, 85, lives in Easton and is also concerned she’ll lose eligibility in the Medicare Savings program, which covers her medications for a chronic health condition.

Like other seniors on the program, Taranto’s income is he monthly Social Security check, and she said “it makes me so angry” that politicians target program aimed at helping the elderly.

“It really makes life difficult for us,” she said. “I’m willing to pay as much of my way as I can.”

Other states do it

Connecticut lawmakers tried to pare back some of the money the state spends on its share of the program last year by lowering the income levels that would make a senior eligible for the program.

That sparked a mass protest by advocates for the aged and the program’s beneficiaries, including Brandt. Plans to cut the program were dropped.

This time, Connecticut lawmakers are taking a different approach, leaving income-eligibility levels intact and looking at a recipient’s assets for the first time.

“My feeling is ‘here we go again,’” said Brandt, who immediately wrote the General Assembly’s Appropriation Committee in opposition to the proposed asset test.

“Please remember that Connecticut has very high energy costs, as well as a very high cost-of-living overall,” Brandt wrote. “When one considers the proposed sales tax increases, potential tolls on our highways and other ways our state seeks to increase revenues, senior citizens are being priced out of Connecticut. Don’t hit us again by dropping us from the Medicare Savings Program.”

For the Lamont administration, however, the assets test is a matter of fairness—as well as a way to help balance the state budget.

At an Appropriations Committee hearing on the governor’s budget earlier this month, Kathleen Brennan, the deputy commissioner of the state Department of Social Services, said Connecticut is only one of eight states that has no asset test for the Medicare Savings program. Alabama, Arizona, Delaware, Mississippi, New York, Oregon, and Vermont are the others.

“This bill aligns Connecticut with the vast majority of other states by instituting an asset test equal to the federal minimum,” Brennan testified.

Opponents of the assets test counter that the cost of living is lower in other states. They also argue Maine, a neighboring state, imposes an asset test, but allows individuals up to $58,000, and couples up to $87,000, in liquid assets — which is many times over what Connecticut is proposing. Minnesota also allows for more generous assets in its Medicare Savings Plan test.

Marie Allen, Executive Director at Southwestern Connecticut Agency on Aging, said that if the state implements an assets test, it may find out that the seniors who flunk it are fewer than expected.

“For many of our folks, it’s clear they don’t have a lot of assets,” Allen said. “It concerns us that the state may spend a lot of money trying to find people with a lot of assets.”

Allen also said she is worried the assets test will further delay the application process for the Medicare Savings Program.