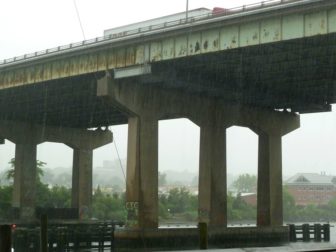 The Yankee Doodle Bridge over the Norwalk River is rated the state’s most structurally deficient bridge.

Washington – The nation’s bridges are deteriorating, but in Connecticut they are in better shape than they were four years ago, according to a report released Monday.

Nationally, however, the report said the pace of bridge repair slowed to its lowest point in five years in 2018. It also said that if America’s structurally deficient bridges were placed end-to-end, the result would span  nearly 1,100 miles, the distance between Chicago and Houston.

The report said the Connecticut bridge that’s in the worst condition is the Yankee Doodle Bridge in Norwalk, which was built in 1957. A bridge on I-95 over the Metro North tracks in New Haven was No.2 in the list of the most structurally deficient bridges in the state, followed by another bridge in New Haven on 1-91 over North Front Street and the Quinnipiac River.

A bridge is structurally deficient if the deck (riding surface), the superstructure (supports immediately beneath the driving surface) or the substructure (foundation and supporting posts and piers) are rated in a condition of 4 or less on a scale of 1-10.

That means the bridge is in need of repair, or replacement, but does not mean it’s unsafe.

Alison Premo Black, the ARTBA chief economist who conducted the analysis based on U.S. Department of Transportation data, said there were fewer structurally deficient bridges last year in Connecticut than there were in 2014 because the state is among those that have recently increased funding for bridge repairs, money that was available through a boost in federal spending on transportation.

“We do see some investment in bridges,” she said.

Congress approved a transportation bill at the end of 2015 that has steadily increased the amount of transportation funding to the states. The Fixing America’s Surface Transportation (FAST) Act raised that funding by 5 percent in fiscal year 2016 and will increase it to more than 15 percent in 2020.

Ric Suzio, chairman of the legislative committee for the Connecticut Construction Industries Association, said the decrease in structurally deficient bridges in the state could be attributed to increased federal transportation funding — and a greater effort by the Connecticut Department of Transportation to repair and replace some of the state’s smaller bridges.

But Suzio said there are still many large bridges in the state, and some smaller ones, too, that need repair.

“The numbers haven’t decreased dramatically,” he said. “But we’re moving in the right direction.”

The report on the nation’s bridges was released as Congress struggles to draft a major infrastructure bill, legislation President Donald Trump promised to press for when he campaigned for the White House.

“Sadly, this report is no April Fool’s joke,” Black said. “At the current pace, it would take more than 80 years to replace or repair the nation’s structurally deficient bridges. That’s longer than the average life expectancy of a person living in the United States.

3 thoughts on “Report: More than 300 bridges in CT ‘structurally deficient’”