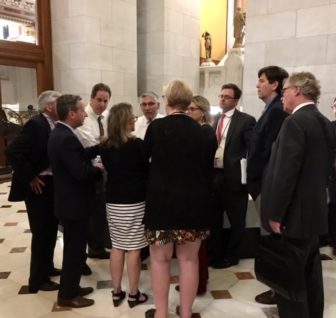 The talks to save the PTSD bill began late Wednesday night among senators as soon as the original version was derailed.

This story was updated on May 30 at 6:25 p.m. with Senate adoption and additional comments from legislators.

A day after one bipartisan deal to expand post traumatic stress disorder benefits to first responders bogged down, Democratic and Republican senators approved a revised bill — salvaging a seven-year effort to address the issue.

But the new version of the bill, which now heads to the House, also would mandate a study of a second expansion to all medical responders as well as Department of Correction officers.

“This bill has been, for me, sort of a labor of love, to provide people with some help for an injury they receive on the job that is not only a physical injury, but also an injury to the mind and heart and soul,” said Sen. Cathy Osten, D-Sprague, a former correction officer supervisor who spearheaded a six-year push to expand benefits.

“Now medical science leads us to know — without question — that psychological injuries and emotional injuries are real impediments,” said Senate President Pro Tem Martin M. Looney, D-New Haven. “The requirement that there be a physical injury as a precursor condition to any claim really is unrealistic and flies in the face of medical evidence. That evidence becomes more and more clear every year.”

The measure would authorize benefits to police or firefighters who are diagnosed with PTSD and who have experienced at least one of the six following qualifying events:

It also would expand from 30 days to 180 days the evaluation period during which the employer can decide whether to accept or deny a PTSD claim.

The measure does not modify benefits currently provided to police officers who seek treatment after using deadly force.

Democrats, who control 22 out of 36 seats in the Senate, thought the bill was headed for approval late Wednesday night.

But Republicans surprised the majority near the end of that five-hour debate when they tried unsuccessfully to amend a bill that supporters warned couldn’t survive major adjustments. That’s because it reflected a difficult compromise not only between political parties and the House and Senate, but also between police and firefighter unions and municipalities.

Critics of the current workers’ compensation system have argued it largely provides mental health benefits to emergency personnel who are the direct victims of violence, and not necessarily to those who witness it in gory detail.

At the same time, municipal leaders expressed fears that if modifications weren’t crafted properly, it could become a huge fiscal burden on local property taxpayers.

GOP senators objected to expanding benefits for police, firefighters and emergency medical technicians who are members of a local fire departments, but not other medical personnel.

“There was no real reason to leave that group out,” said Senate Minority Leader Len Fasano, R-North Haven.

The new compromise maintains this limit, but orders the legislature’s Labor and Public Employees Committee to study a second expansion and report back to the full legislature next year.

“This is a good thing,” said Sen. Julie Kushner, D-Danbury, co-chairwoman of the Labor and Public Employres Committee.. But “it’s unfortunate the way it unrolled because I think we’re all in agreement that we would like to see this expanded to cover those who really suffer from PTSD. Clearly our goal is to cover everyone who is in that situation.” 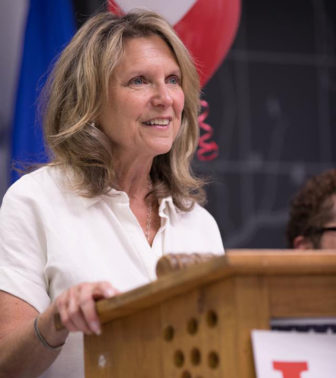 The General Assembly has been trying to resolve the PTSD benefits issue since the December 2012 shooting deaths of 26 children and staff at Sandy Hook Elementary School in Newtown. And legislators have had to navigate a minefield of competing concerns from unions representing first responders and from the municipalities that must pay the benefits.

Kushner said Democrats never have opposed a study, and that there was no reason for Republicans to jeopardize the measure late Wednesday with a last-minute expansion of coverage if they were willing to settle for a study.

Osten said she’s lost about 20 of her former colleagues to suicide and agreed with Kushner that had Republicans called earlier for a study of potential benefits for all medical personnel and for correction officers, Democrats gladly would have included it in the original bill.

“I’ve always considered post-traumatic stress to be an issue for DOC and for the emergency medical folks,” she said.