A personal touch in a CT-NY push on legalizing pot 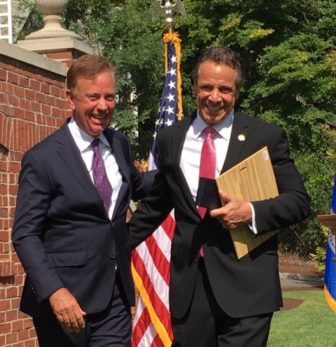 Gov. Ned Lamont intends to ask the General Assembly to legalize recreational marijuana next year in tandem with an identical effort in New York by Gov. Andrew M. Cuomo, reviving an issue that legislative leaders still see as problematic in Connecticut until after the 2020 elections.

Lamont, a Democratic first-year governor intent on finding regional approaches to issues with the governors of Massachusetts, Rhode Island and New York, shared his plans Wednesday after a cordial meeting with Cuomo, a fellow Democrat and national political figure, at the Executive Residence in Hartford.

“I think he’d like to do it in his session that starts in January,” Lamont said of Cuomo. “We’d like to do it in February. The idea that Rhode Island, Connecticut, New York, even New Jersey, trying to do this on a carefully regulated basis, I think makes a great deal of sense.”

Legislative leaders applauded Lamont’s outreach to Cuomo and other governors on an agenda that ranges from the practicalities of cooperative purchasing to developing strategies for transportation improvements that look beyond state borders. But they expressed doubt the approach would attract new support for recreational marijuana.

“I don’t, no offense,” said House Majority Leader Matt Ritter, D-Hartford, who favors legalization. “I think the members of the General Assembly know how they feel about this. It isn’t a new issue.”

Senate President Pro Tem Martin M. Looney, D-New Haven, said coordinating with neighboring states on issues related to the taxation, availability and quality control of marijuana would be smart — if Connecticut ever legalizes pot. It is now legal in Massachusetts.

“I don’t know if it makes any difference concerning the threshold issue of whether you do it or not,” Looney said.

“Other state are now beginning to see the results and consequences [of legalization], and a lot them are not good,” Klarides said. “That’s a big deal.” 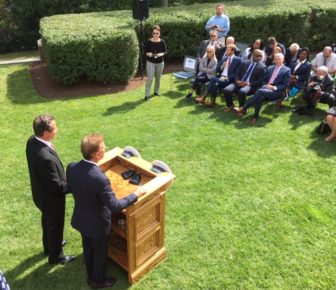 The governors’ joint press conference outside the Executive Residence.

Told of the legislative reaction, Lamont said later Wednesday in an interview he still has hopes that the prospect of coordinated action on marijuana would cause legislators to take a fresh look at legalization when they return in February for the start of the 2020 session.

“Do you want to be the only state in the entire region that is at cross purposes, the only state that opens this up to the black market or kids leaving?” Lamont said. “I want this on a carefully regulated basis. That was the message I tried to give.”

Cuomo said the states should have the same age for the purchase of marijuana and should consider common standards for quality, including the labelling and allowed amounts of THC, the active ingredient in marijuana. Officials from both states plan a follow-up meeting next month, and they also are working on ways to regulate vaping.

The two governors discussed transportation, but their action item Wednesday was an endorsement of a common approach to pot.

Cuomo said no one should be surprised by the cooperation.

“Why wouldn’t New York and Connecticut work together? We are neighbors. We have the same problems. We have a common border,” Cuomo said. “We’re better together than we are separate.  It makes all the sense in the world for us to work together. It would be absurd not to, frankly. If governors didn’t work together in neighboring states, you’d be fair to question why not?”

Cuomo and Lamont’s predecessor, Dannel P. Malloy, worked cooperatively at times, but they exhibited none of the personal touches now evident with Lamont and Cuomo, who fished together on Lake Ontario last month and laughed easily Wednesday. Cuomo said that Lamont actually caught a bigger fish, but the Connecticut governor was too polite to say so. On Wednesday, Lamont gave Cuomo a laminated Connecticut fishing license.

Asked how personalities and politics played a role, Cuomo focused on contemporary politics.

“I have never seen a period of time where society faced more difficult issues with more rapidity and with less intelligent federal responses. I believe it is up to the states,” Cuomo said. “I believe that we are going to get very little help from the federal government. And that’s not a partisan comment. You can blame whomever you want to blame.”

Cuomo said the states are on their own.

“And to the extent states can work together, we need to work together,” Cuomo said. “We need the thinking, we need the collective action, because none of us have been here before. I don’t think this country has ever been in this position before. And as an elected representative, you want to make sure you’re doing everything you can to do your best for your people at that time. And this is what today is all about.”

That might be off message for Lamont. His administration hosted a visit Friday from the executive director of the Build America Bureau of the U.S. Department of Transportation to talk about low-cost federal financing of transportation infrastructure.

Standing next to Cuomo in the garden of the Executive Residence, Lamont said he agreed with the New York governor that the states generally should not look to Washington, but he quickly pivoted to an emphasis on the importance of Connecticut’s relationship with New York.

On that, Lamont has bipartisan backing.

“I think it’s great,” Fasano said. “We have a lot of commonality.”

“I don’t think there’s ever anything bad in developing relationships with people from the surrounding states,” Klarides said. “We are all connected in a lot of ways.”