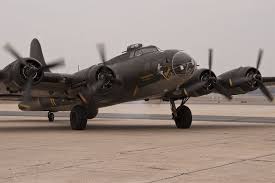 A B-17G Flying Fortress heavy bomber, like the one pictured above, crashed Wednesday at Bradley International Airport.

Seven people were killed in the crash of a World War II -era bomber Wednesday at Bradley International Airport.

The plane crashed and was engulfed in fire shortly after takeoff at 9:45 a.m. Wednesday. It carried two pilots, 10 passengers and an attendant.

At a Wednesday night press conference at the Sheraton Hotel near the airport, State Police Commissioner James Rovella said he could not release the names of those killed in the crash because three of the families of the deceased had not yet been contacted. Rovella also declined to release the names of the six survivors from the airplane.

He said there were no children on the plane and that two people on the ground, an airport employee and a firefighter, also sustained injuries.

Rovella also said there are stories of heroism, including “one heroic individual who went to the plane and helped people out.”

The FBI and employees of the Department of Homeland Security, as well as those from several state agencies — including the medical examiner’s office — are also on the scene, Rovella said.

The B-17  bomber was owned by the The Collings Foundation, a Massachusetts nonprofit that restores World War II-era aircraft. It was one of five planes at the airport this week for public tours.

The plane crashed soon after a 9:45 a.m. takeoff. The B-17 had been trying to land again, the Federal Aviation Administration said on Twitter. Then it hit a deicing facility and burst into flames, fed by the airplane’s leaking fuel.

A team of National Transportation Safety Board inspectors, led by board member Jennifer Homendy, arrived at Bradley Airport on Wednesday afternoon.

Homendy said a drone specialist will help the agency document the scene and staff from NTSB’s  family assistance division are available to help family members of victims.

At the Sheraton press conference, Homendy said the NTSB investigators don’t yet know why the bomber tried to land so soon after takeoff.

She said a full investigation of the accident may take up to 18 months and the NTSB will spend several days collecting information, including pictures, video and documentation and interviewing witnesses and airport personnel. The NTSB will also look for the B-17’s  “black box,” a flight data recorder that is a key aid in determining the cause of a plane crash, Homendy said.

“We will also be looking at the history of the airplane and how it was maintained,” including service records,  she said.

Homendy said it is too early to be concerned about other B-17  bombers that still are flying.

But Homendy said the NTSB “will look at how (vintage planes) are regulated,” opening the door for reform of those regulations.

The Connecticut National Guard, which responded to the crash, said Wednesday that a guardsman is one of the survivors.

The Connecticut Department of Public Health and the Town of Windsor sent out a notice alerting the public to a potential discharge of firefighting foam, used to put out the burning B-17, into the Farmington River.

“The public is advised not to come into contact with foam they may encounter on the Farmington River or the river banks, as well as do not take or consume fish from the river,” the DPH and Town of Windsor said in a joint statement.

Bradley International Airport shut down for about four hours after the crash. The airport said it hopes to be fully operational on Thursday, but advised passengers to contact airlines to make sure flights have not been cancelled.

Gov. Ned Lamont sped to Bradley International airport as soon as he was notified by Rovella of the crash.

“Right now my heart really goes out to, you know, the families who are waiting, and we are going to give them …”

For three seconds, Lamont struggled to compose himself.

“… the best information we can as soon as we can in an honest way. But remember these are husbands and wives and brothers and sisters and children and all members of our Connecticut family. We feel our hearts are broken for you right now. We’re doing everything we can.”