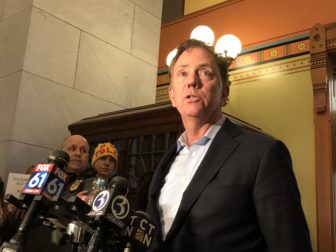 The Senate Democratic majority effectively took highway tolls off the table Wednesday as a means to leverage low-cost federal financing of Gov. Ned Lamont’s sweeping $21 billion plan to maintain and modernize Connecticut’s aging transportation infrastructure over the next decade.

“I think we need to find something that is broadly palatable in the General Assembly and also to the public,” said Senate President Pro Tem Martin M. Looney, D-New Haven.

Senate Democrats met for two hours with Lamont in their third-floor caucus room at the State Capitol, then discussed the governor’s CT2030 plan for more than another hour after Lamont departed.

They had one small piece of good news for Lamont once they emerged to face the press. The senators, who hold a 22-14 majority in the upper chamber, are ready to offer “broad-based support” for the transit, highway and bridge investments in CT2030 — and they would like to act on them before the General Assembly returns in regular session in February, Looney said.

But no one made a move to pick up the tab.

“I think we all want to move forward on a plan, we just have got to figure out how to fund it,” said Senate Majority Leader Bob Duff, D-Norwalk.

Neither leader would unequivocally pronounce tolls dead as they spoke outside the Senate caucus room, but off to the side stood a furious David Roche, the leader of the Connecticut Building Trades. He quickly decoded their comments as a firm rejection of the governor’s financing plan. 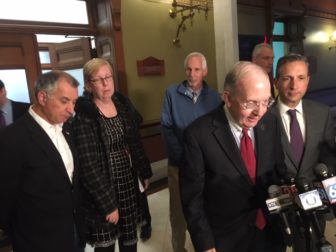 Sen. Martin Looney and other Democrats addressing reporters. They called tolls not “palatable.”

“What about the 26,000 jobs?” Roche said, a reference to the annual construction hiring necessary to the carry out the plan.

And several sources familiar with the caucus discussion confirmed that Looney’s message  was, in fact, for the governor to give up on highway tolls that could have raised $320 million annually.

The Lamont administration offered no immediate comment on the leaders’ comments, but the governor conceded earlier after his meeting that he was leaving without any commitments to vote for his plan, as drafted.

Attention now will shift to Senate Republicans, who plan to outline a no-tolls alternative Thursday, and how that is received by a Democratic governor unable to do business with a Democratic leadership in the Senate on one of his key priorities.

Sen. Saud Anwar, D-South Windsor, said he was willing to vote for a transportation plan that  placed tolls on interstate highways, where about 40 percent of the revenue would be projected to come from out-of-state drivers. But he objected to inclusion of Routes 8 and 9 in CT2030, highways with little interstate traffic.

Sen. James Maroney, D-Milford, who campaigned as a supporter of trucks-only tolls, said he believes the governor has succeeded in convincing the caucus that transportation is an immediate need in Connecticut, even if he found no consensus on financing.

“I’m looking forward to seeing what he comes up with in response,” said Sen. Matt Lesser, D-Middletown.

One sign of how badly the caucus went for Lamont was that his chief of staff, Ryan Drajewicz, and Looney’s, Vinnie Mauro, exited the room to converse at length in adjacent the empty Senate chamber.

The governor acknowledged the political risks those backing tolls would face, but dismissed any argument that the risk justified delaying a long-overdue rebuild for an aging, overcrowded transportation system.

“I said, ‘I’m sorry. I’m asking you to cast a tough vote,’ ” Lamont said. “‘You’ve inherited a mess. This goes back 30 or 40 years. You’ve got a Special Transportation Fund that goes underwater in five years.’ ”

Looney has been an obstacle to the passage of Lamont’s plan since his original proposal in February, viewing a Democratic vote for tolls without some Republican support as a risk to the Democratic majority in 2020, when lawmakers are on the ballot and Lamont is not.

The governor now must decide how much of his plan is affordable and how it can be financed. To obtain federal low-cost financing, Lamont needs to identify a dedicated revenue stream.

The $1.7 billion Special Transportation Fund, which represents 8% of state’s annual budget, pays for Department of Transportation operations and the debt service on financing for highway, bridge and rail upgrades. And that borrowing qualifies Connecticut for more than $700 million in matching federal transportation grants. 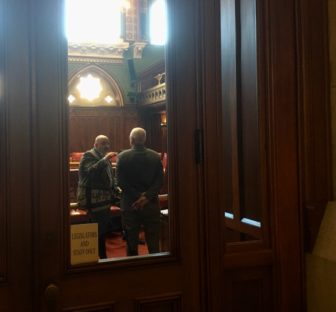 The chiefs of staffs: Vinnie Mauro, left, and Ryan Drajewicz, in a side meeting in the empty Senate chamber

State analysts project the Special Transportation Fund would fall into deficit, and possibly insolvency, by 2025 — if Connecticut accelerates a capital program that does nothing to relieve congestion and barely maintains a state of good repair.

DOT officials have estimated Connecticut should be spending about $400 million-to-$500 million more per year on infrastructure work than it currently does.

And Lamont says tolls are the only realistic option to make this happen.

The governor’s proposal calls for 14 tolling gantries scattered across the state, primarily around bridges in need of repair.

“I know we’d all love to put this off,” Lamont said. “I’d love a delay, maybe a study, how about a commission? But that’s not our choice right now.”

Making this hard choice, the governor said, could generate about $315 million per year.

This new tolling revenue, coupled with additional sales tax receipts Lamont would dedicate to transportation, not only would allow Connecticut to borrow more for infrastructure work, but also would permit more than $130 million per year in cash financing of repairs — sparing the state huge interest costs.

While there has been some speculation at the Capitol that Senate Democrats might support taxation of marijuana sales and a new fee on sports betting to support transportation, Lamont said those options were not discussed in caucus.

But even if those were approved, they would not generate the revenues available via tolls.

Some estimates offered by marijuana-legalization advocates are that Connecticut could raise as much as $60 million in the first fiscal year and $170 million in the second after taxation of marijuana sales for recreational use has begun. The take on sports betting was projected at about $30 million to $40 million per year.