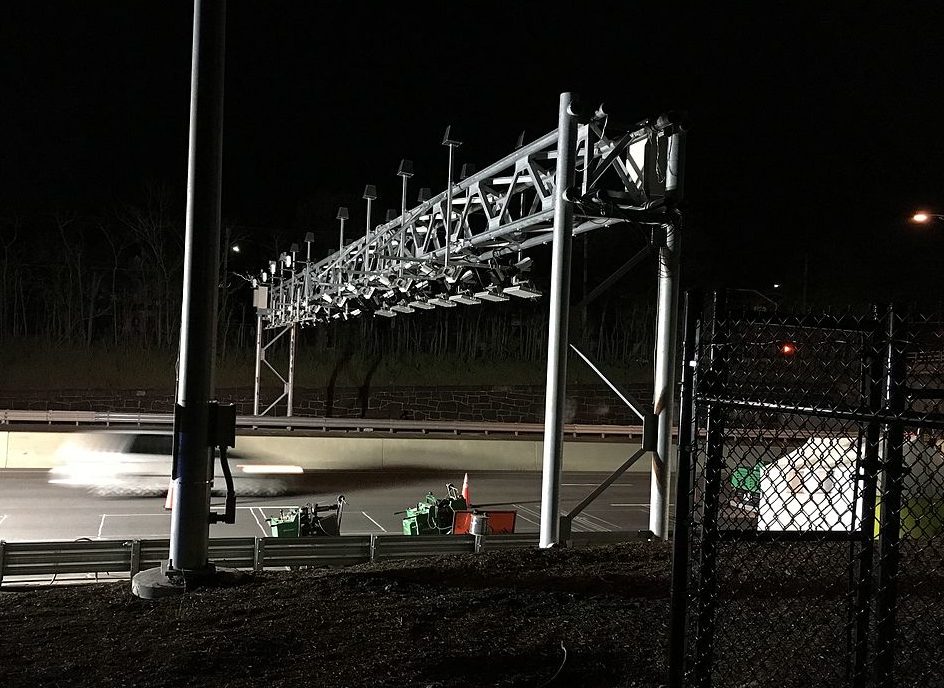 The governor launched a new transportation plan Thursday that includes installing toll gantries, like these on the Massachusetts Turnpike, on 14 bridges in Connecticut.

Note: This story was originally published on November 7, 2019.

As Gov. Ned Lamont tries to convince lawmakers that tolls would remain fixed at a modest price for at least a decade, his own history is working against him.

Yes, Lamont alienated voters and lawmakers by going back on his campaign pledge not to impose tolls on any vehicles other than large trucks, but the trust problem is bigger than that.

Lamont’s plan to keep tolls as low as 40 cents per gantry hinges on a complementary move: shifting hundreds of millions of dollars in sales tax receipts into the transportation system.

But just last June, Lamont and his fellow Democrats in the legislature blocked a major infusion of sales tax revenues earmarked for the Special Transportation Fund. This was done despite a new constitutional “lockbox” provision specifically created to prevent such a move. 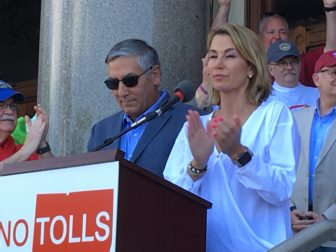 That has left Republican legislative leaders asking why they should believe Lamont won’t divert those tax receipts a second time — especially if the economy tanks in a year or two — and simply boost tolls to make up the difference.

“This is not personal, but this is a question of trust,” said House Minority Leader Themis Klarides, R-Derby, a staunch opponent of tolls. “He raided the Special Transportation Fund in his budget and did a run-around the constitutional lockbox. And now he’s claiming he’s going to put the money back in two years? What makes anybody think he’s not going to do the same thing again?”

“The biggest problem with their concept is the lack of trust in government,” said Senate Minority Leader Len Fasano, R-North Haven. “It’s a major concern and it’s a concern, frankly, that’s interwoven into their whole plan.”

“He raided the Special Transportation Fund in his budget and did a run-around the constitutional lockbox. What makes anybody think he’s not going to do the same thing again?”

“The only thing more important to the governor than delivering those benefits is his word,” said Max Reiss.

Lamont’s predecessor, Gov. Dannel P. Malloy and the 2015 General Assembly first turned to the sales tax — Connecticut’s second-largest revenue source after the income tax — to shore up the Special Transportation Fund. The STF is a key portion of the budget that funds Department of Transportation operations as well as debt payments on borrowing for highway, bridge and rail projects.

Malloy and lawmakers approved a new series of escalating annual sales tax transfers that pumped about $320 million per year into transportation by 2018. Republican and Democratic legislators then upped the ante even further, ordering sales tax revenue transfers in larger and larger numbers through 2025.

“The only thing more important to the governor than delivering those benefits is his word.”

The key to protecting the fund transfer was a new state Constitutional amendment ratified by nearly 90% of voters last year.

That amendment mandated that once a revenue stream had been dedicated for transportation — such as gasoline tax revenues or a portion of sales tax receipts — it could not be diverted for another purpose. 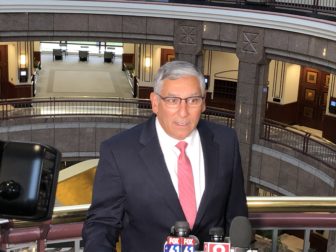 But when Lamont took office in January, he inherited a projected $3.5 billion deficit in the upcoming, two-year state budget.

To help whittle down that problem, Lamont insisted he didn’t have to follow the escalating revenue transfer schedule, saying the increases approved for the 2019-20 and 2020-21 fiscal years — though required by statute — technically hadn’t happened yet and could be canceled without violating the lockbox.

This would give Lamont an extra $266 million in sales tax receipts he could use to reduce the budget deficit.

Instead, he agreed to maintain the revenue transfer at the level it was when the lockbox was ratified in 2018. The transportation system would face some lean years, the administration argued, but would be fine by 2024 if lawmakers adopted tolls.

Republicans, who oppose tolls, immediately cried foul and said Lamont clearly carved out a loophole that violates both the will of voters and the spirit of the lockbox provision.

But if legislators embrace his new plan, Lamont is ready in 2022 to go back to the original sales tax transfer plan. By that point, the rest of the state budget would have to forfeit about $185 million in sales tax receipts to the transportation program. 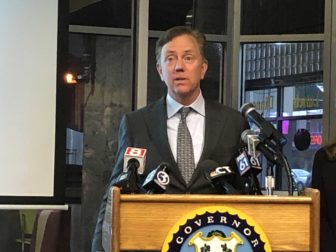 Lamont “has always approached the budget as a dialogue between the executive and legislative branches,” Reiss said, adding that this “will stabilize the STF” and keep it solvent, even as Connecticut launches into a major new period of rebuilding.

As he announced details of his new CT2030 transportation plan Thursday, Lamont insisted he is still compromising. His February tolls plan was much more extensive, he said, and called for much larger investments to rebuild Connecticut’s aging, overcrowded infrastructure.

“If the legislature has a better idea how to pay for it, I’m all ears,” the governor said.

The governor’s plan also hinges on accessing low-interest federal financing, and Connecticut could not play games with its transportation fund if it hopes to secure those funds.

“If the legislature has a better idea how to pay for it, I’m all ears.”

“Unlocking low-interest federal loans for CT2030 requires demonstrating that Connecticut can afford to repay those loans while simultaneously meeting our other obligations,” Reese said.

Under the governor’s new plan, passenger car tolls of 50 cents to $1 would be charged on 14 bridges, with 20% discounts for Connecticut drivers with E-ZPass transponders, dropping the cost to 40 cents or 80 cents, depending on the time of day. Heavy trucks would pay between $3.50 and $7, less with a Connecticut E-ZPass.

Lamont also insists he can provide new legal protections to ensure these prices remain fixed through at least 2030.

Connecticut would write into the loan agreement with the federal government that toll rates would not change until the borrowed funds have been paid off, Lamont said. This would essentially lock them in contract through the late 2040s — when the loans are projected to be fully paid.

Both Fasano and Klarides said they need to research further how secure this professed safeguard is, and whether future legislatures or governors might have options to raise toll rates.