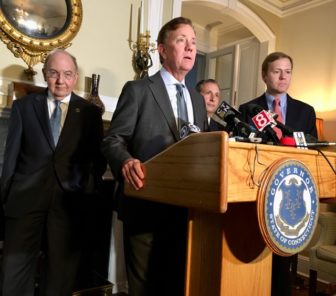 The Senate Democratic majority intends to take a hard count Tuesday of votes in favor of a 10-year transportation financing plan that would rely on truck tolls, a pivotal moment for Gov. Ned Lamont as he approaches the last day of his first year in office on Wednesday.

“We hope we can get to 18,” said Senate President Pro Tem Martin M. Looney, D-New Haven, a reference to the bare minimum necessary for passage. “We hope we can move on to the main business of the next session.”

Eighteen votes would guarantee at least an 18-18 tie, with Lt. Gov. Susan Bysiewicz poised to cast a tie-breaking vote in favor as the presiding officer of the Senate. Democrats hold 22 of the 36 seats in the Senate.

Democrats still hope to pass a transportation package in special session before the regular 2020 session opens on Feb. 5, allowing the majority party to focus on less controversial measures before adjourning in May to begin re-election campaigns.

The administration has said an early vote would allow the state to begin the process of applying for low-interest financing available from the U.S. Department of Transportation.

House Minority Leader Themis Klarides, R-Derby, and Senate Minority Leader Len Fasano, R-North Haven, said there is no policy rationale for a special session, only a political desire to neutralize a difficult issue with a quick vote and minimal public review.

“It’s not a popular issue,” Fasano said. “They want to get the dirty laundry out early.”

“If you think you have the votes, then wait until the session starts,” Klarides said. “There is no urgency.”

House and Senate Democrats are both caucusing Tuesday to review the latest iteration of the Lamont administration’s fitful campaign for revenue it says is necessary to return Connecticut’s highways and transit system to a state of good repair and make improvements to shorten commutes.

House Speaker Joe Aresimowicz, D-Berlin, was unsure Monday if he would take a vote during his caucus, but he said his sense for months has been that the House Democratic majority would support even a broader tolling plan.

“I still feel feel very comfortable,”  Aresimowicz said. “We were in a very good area with tolls before. This is a drastically reduced and more politically positive plan moving forward. As Marty has said, rightly so, this has been tested at the polls.”

Lamont, who was elected on a platform that included truck tolls, instead made an initial proposal in February of a comprehensive system of highway tolls on all motor vehicles using Route 15 and Interstates 84, 91 and 95. It would have included at least 50 toll gantries.

A CT 2030 plan, as the administration dubbed the new version released in November, still would have included tolls on passenger cars but was praised for making the case for individual projects, a failure of the original proposal.  The governor personally pitched it to Senate Democrats in November, only to be immediately told it was not “broadly palatable” to lawmakers.

House Democrats countered by suggesting a return to a version of Lamont’s original campaign proposal: truck tolls — something that has been implemented by Rhode Island, but is being challenged in court by the trucking industry.

On Monday, it was unclear how detailed a plan would be presented in caucus. Lawmakers and the administration have agreed to toll only heavy commercial trucks, without settling on a precise weight classification. The U.S. Federal Highway Administration has 13 classes of  vehicles, and at least half would be exempt in Connecticut.

Lamont, a Democrat and wealthy businessman who self-funded his campaign in 2018, made transportation the focus of his first year, saying Connecticut’s slow economic growth was at least partly a consequence of highway bottlenecks and an inadequate Metro-North commuter rail system.

Looney and other Senate Democrats viewed the governor’s first toll proposal as politically toxic and a risk to the gains made in 2018, when Democrats won a strong majority after two years of sharing power in an evenly divided chamber. But Looney said the version to be presented Tuesday “is even a more modest plan than the one he ran on successfully.”

Opponents of truck tolls say it would be the first step to a broader system, but Looney noted that car tolls gained no traction in the General Assembly, making expansion a political non-starter.

The legislation under consideration would not give the state Department of Transportation the authority to toll cars, meaning that broadening the system would require the consent of a future General Assembly.

“We’re clear,” Looney said. “We are supporting no plan that involves tolls on passenger cars.”

Lamont will talk about transportation at 9 a.m. on WNPR’s “Where We Live” and Thursday morning on WTIC-AM. If there is a special session, the legislature is expected to hold at least one informational hearing.