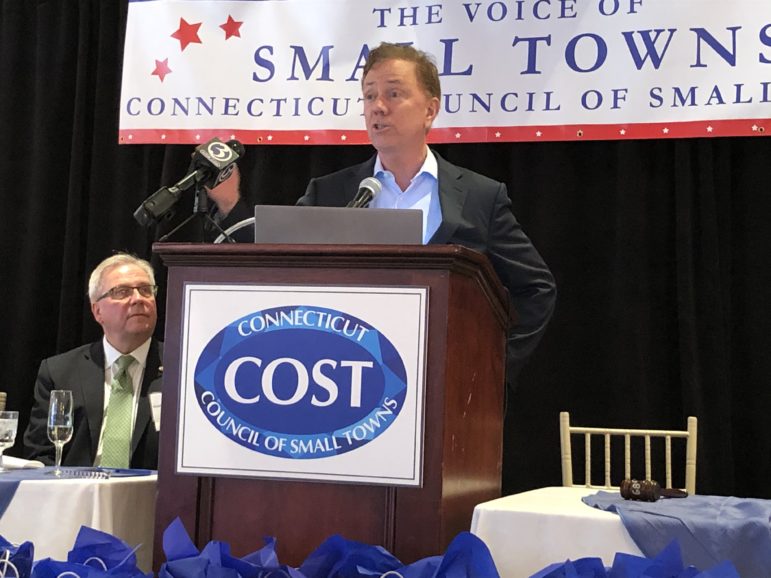 Lamont made his pledge following a mid-day appearance before the Connecticut Council of Small Towns. The coalition, which represents 115 municipalities with populations less than 35,000, featured Lamont as keynote speaker at its annual town meeting.

“I’m trying to honor the commitment that previous governors have made,” Lamont said, referring to bonding for three municipal grant programs that collectively sent $150 million to cities and towns last fiscal year.

The governor’s pledge comes one day after leaders of the legislature’s Democratic majority announced the latest delay in voting on the transportation plan. A vote tentatively scheduled for Thursday was canceled, and a vote is not expected before next week at the earliest.

“This is great news,” Elizabeth Gara, executive director of COST, said of the governor’s pledge. “We’ve been waiting for that Town Aid Road funding for several months now.”

Gara noted that the Local Capital Improvement Program grant, which supports many municipal sidewalk, parking area and downtown development initiatives, usually is released in March. “Towns need to know that money is in place soon,” she said, adding that planning already is underway for projects set to start this spring.

DeLong also praised Lamont for attending both the COST meeting as well as the CCM annual conference held recently. “He’s been very accessible,” DeLong said, adding that the new governor has fostered a strong working relationship with municipal leaders.

Lamont didn’t offer a precise date for releasing the stalled grant dollars, but said it wouldn’t take long for him and lawmakers to adopt a bill authorizing the funding, and to then have the State Bond Commission — which also must grant approval — endorse the borrowing. Lamont chairs the bond commission and his budget office sets the agenda.

While the governor and legislature approved a new two-year state budget last June, they did not settle on a complementary two-year bond package — a schedule of projects and programs to be supported with long-term financing.

Lamont, who is asking legislators to finance an 11-year rebuild of Connecticut’s aging, overcrowded transportation infrastructure partly with tolls on large commercial trucks, has said he can’t sign off on a bonding package until transportation’s future is unclear.

Why not? Because absent toll receipts, low-interest federal loans and other revenue sources in the latest transportation proposal, Connecticut may have to shift bonding away from many non-transportation programs to upgrade its highways, bridges and rail lines, Lamont said.

“We really do need to get our hands on” those grants, Roxbury First Selectwoman Barbara Henry told Lamont during a question-and-answer period. She asked why local aid was being held hostage by the transportation debate.

“I think that is a cheap shot,” said Lamont, who addressed about 250 municipal leaders gathered at the Aqua Turf in Southington. “I’m not holding anything hostage. I’ve just got to figure out how we’re going to pay for transportation.”

But the governor, who is a former member of Greenwich’s Board of Finance, said he understands the challenges of balancing a municipal budget.

And while Lamont would prefer Connecticut not borrow for a significant portion of its non-education grants to cities and towns, he noted Wednesday that this is a system he inherited, not one he created.

“Look, I’m not playing games,” Lamont said, adding he’s still hopeful legislators will adopt the transportation plan before them, rather than risk overloading the state’s credit card to fix its infrastructure.

“I told these people, even if we can’t” get this transportation initiative passed, “I’ll make sure we get their municipal aid going, because that’s a deal we made with them.”

Last fiscal year communities received $60 million in bonded aid for the Town Aid Road program, another $60 million for an omnibus grant for municipal projects, and $30 million for the Local Capital Improvement Program.

The stalled Town Aid Road funding has been particularly contentious given the timing.

Communities normally receive half of the $60 million in July, so it can be used for summer road repaving and fall tree clearing, and another $30 million in January, which helps pay for winter snow removal.

Lamont showed similar flexibility to assist municipalities last July when he agreed to move forward with another portion of the bond package. At that time he signed a bill authorizing $160.5 million in bonding to assist various municipal school construction projects.

But the governor also made clear Wednesday that the rest of the bond package still cannot be settled until Connecticut has a clear plan on how to rebuild its aging transportation network.