Lamont reminds the locals: On COVID-19, he is in charge. 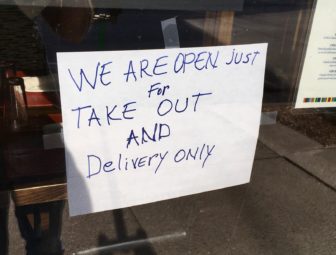 The executive order signed Friday by Gov. Ned Lamont simultaneously restricts commercial life in Connecticut, while barring municipal officials from prohibiting travel in their communities or ordering residents to “shelter-in-place” during the COVID-19 coronavirus crisis.

At his afternoon briefing, the governor emphasized his new restrictions, primarily the closure of all non-essential businesses by 8 p.m. Monday. But the implementation order released Friday night also makes clear that the Lamont administration is reserving the final word on any further restrictions on commercial and social life in Connecticut.

It says “to ensure the coordinated, clear and expeditious execution of civil preparedness functions for the protection of the public health” no mayor or other chief executive may “issue any shelter-in-place order or order prohibiting travel” without the written permission of the state Department of Emergency Services and Public Protection.

The language included in Lamont’s 9th executive order relating to COVID-19 comes three days after an extraordinary public clash in New York between Gov. Andrew Cuomo and the Big Apple’s mayor, Bill de Blasio, and one day after a quieter divergence in Connecticut over the permitted size of public gatherings.

Cuomo quickly rebuked De Blasio for talking about a potential shelter-in-place order and even the possibility of curtailing travel out of the city, saying he would not allow the mayor to order such limits. In Connecticut, a move by Bridgeport, Hartford, New Haven and other communities  to impose tighter limits on public gatherings than the state had set went unremarked — until Friday night.

Joe DeLong, the president of the Connecticut Conference of Municipalities, said Friday night that he anticipated no opposition to Lamont’s order, saying the administration has exhaustively consulted with CCM and its members on orders issued and some being considered.

“And so I think most of our members, and us as an organization, believe two things: One, we’re all in it together; and two, there needs to be strong leadership from the administration — and there has been,” said Joe DeLong, the association’s chief executive officer. “We’re a part of these conversations, a vital part.”

Hartford Mayor Luke Bronin, one of the mayors to sign local orders limiting public gathers to no more than 10, did not object to the governor’s new order.

“Governor Lamont’s desire for uniformity makes sense, and while some municipalities have taken additional measures, as we have in Hartford, the governor’s most recent order tightens things so much statewide there’s really not a lot of room for divergence any more,” Bronin said.

“I think the governor’s tone, I think what he said repeatedly was, ‘Look, we’re trying to strike a balance here. This is real. We’ve got to respond,’ ” Ganim said.

The Centers for Disease Control and Prevention has recommended crowds of no more than 10, the limit adopted by many mayors. The governor originally set a limit of 250 at public events, then lowered it to 50. He also ordered the closure of schools, malls, theaters, gyms, bars and restaurants, while allowing the continued sale of take-out meals, groceries, and other essentials.

His new order closes the offices of non-essential businesses and non-profits and “shall employ, to the maximum extent possible, any telecommuting or work from home procedures that they can safely employ.” It takes effect Monday at 8 p.m.

Not later than 8 p.m. Sunday, the Department of Economic and Community Development “shall issue lawfully binding guidance about which businesses are essential,” but the order itself enumerates many on page 3 of the 4-page document. They range from hospitals to various retailers and defense-related manufacturers.

The full order is below.