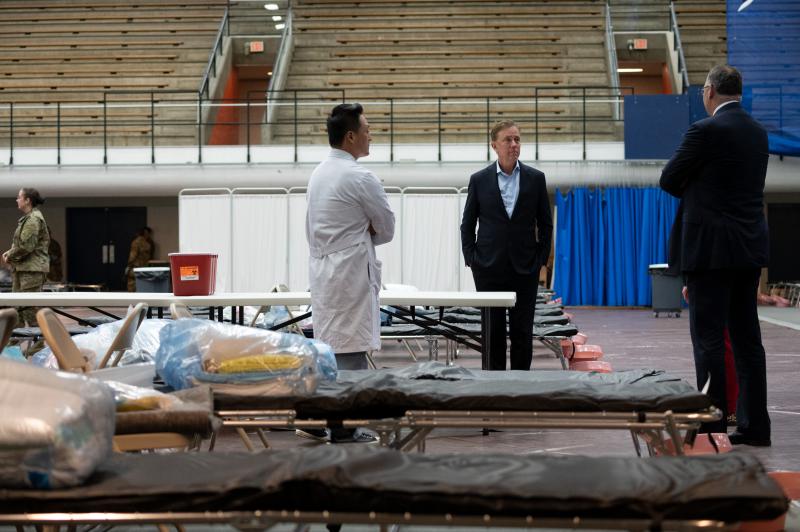 Gov. Ned Lamont stands between beds in New Haven on March 31. The beds are intended for patients in case regional hospitals are maxed out by the COVID-19 pandemic.

This story will be updated.

Gov. Ned Lamont announced a partnership with Quest Diagnostics Tuesday which he said will significantly boost the state’s capacity to test for COVID-19. The announcement comes as the number of confirmed cases exceeded 20,000 for the first time and the death toll surpassed 1,400.

So far, state officials said Connecticut has run a daily average of about 2,600 COVID-19 tests over the last seven days. The state said the partnership could mean an 80% increase in available tests.

“As we think about returning the state to work, amping up our testing capabilities is paramount,” said Jeffrey Flaks, president and CEO at Hartford HealthCare.

Patients looking to get tested will still need a test order from a clinician. Results will be turned around in 24 hours.

Lamont said partnership will expand testing capacity not only for the Hartford area, but also Norwich, Bridgeport, and New Britain.

“They’re going to have a mobile testing facility, so we’ll be able to get those tests out to nursing homes, and correctional facilities, and homeless shelters — and those places where we have the most contagion,” Lamont said.

The partnership announcement came on the same day as some particularly grim news — the deaths of 35 people from complications related to the coronavirus at the Windsor nursing home Kimbery Hall North.

The death toll at Kimberly Hall North ballooned in the last week, going from nine deaths to 35, officials said Tuesday.

The state has been working with local health officials across Connecticut to reclassify the cause of death for some nursing home residents, which has pushed up figures at many facilities.

Statewide, about 56% of all COVID-19-related deaths have involved nursing home residents.

Dr. Richard Feifer, chief medical officer for Genesis HealthCare, the parent company of the Windsor facility, Kimberly Hall North, said it was not clear why that home had a larger death rate than many others. The facility has a total of 150 licensed beds, according to state numbers.

“Our heart goes out to their families, and our heart goes out to their caregivers who are torn apart by the devastation,” he said. “I wish I could tell you exactly why that facility had so many when others around the state and the country haven’t. But that speaks to how much we don’t know yet about this virus, about how exactly it is so contagious and how to contain it.”

Administrators at Kimberly Hall North did not return a call seeking comment.

Asked about the nursing homes Tuesday, Gov. Ned Lamont pointed to the availability of swifter tests and noted that inspections are underway at all Connecticut facilities. He did not address a question about the situation at Kimberly Hall North.

Nursing home leaders arranged the call with reporters Tuesday to discuss the challenges of coronavirus spread in their facilities, expressing frustration about the difficulties of obtaining protective equipment for their workers.

Paul Liistro, chief executive officer of the Manchester Manor and Vernon Manor skilled nursing facilities, said purchasing the equipment has become costly. Surgical masks that typically cost 6 cents apiece are now being sold for as much as $1.20, he said.

While most gear is hard to obtain, gowns are particularly in short supply.

“A gown, if you can get it, is somewhere between $8 and $12,” Liistro said. “The other day I was arguing over shipping for a case of gowns that was going to cost $300 by air freight. It was a ridiculous choice I had to make, but we had to pay it.”

Feifer agreed, describing the markets to buy personal protective equipment like gowns and masks for nursing home workers as “chaos.”

“Hospitals and nursing homes — we are all in bidding wars in back alleys. And it’s crazy. And it’s wasteful,” Feifer said. “We need more production because fighting over an inadequate supply is still going to have too many losers and too many deaths.”

Josh Geballe, Lamont’s chief operating officer, said Tuesday that the state received “some significant deliveries” of protective gear over the last 24 hours and is working to distribute the equipment. N95 respirators, surgical masks and gloves were among the materials delivered.

“It’s been tight, but we’ve been getting supplies out,” he said.

The university’s new care center aims to open up hospital bed space for acute-care COVID-19 patients. The space will give those recovering from the virus a quarantined area to recover, while they would still receive treatments that would be difficult to manage in a home recovery setting, like intravenous fluid.

On Monday, the House Republican caucus wrote to Lamont requesting more clarification about his plans to reopen Connecticut following weeks of school and business closures aimed at preventing the spread of COVID-19.

In a letter co-signed by state House Republican leader Themis Klarides and deputy House Republican leader Vincent Candelora, lawmakers said they agree with certain thresholds Lamont has said need to be met before any mass re-opening of Connecticut — including a steady 14-day decline in coronavirus cases and hospitalizations, as well as more mass testing.

Meanwhile, Klarides, who was the first woman to lead the Republican members of the Connecticut House of Representatives, said Tuesday she will not seek re-election, but she has not ruled out a run for governor.

Klarides was first elected in 1998 to represent Derby, Woodbridge and Orange.

Her announcement came the same day as lawmakers said they’re not reconvening the regular 2020 legislative session because of the COVID-19 pandemic.

“Student loan borrowers, regardless of whether or not they are federally guaranteed, who are having trouble making their payments should immediately reach out to their servicers to discuss what options best suit their needs,” said state Banking Commissioner Jorge Perez, in a statement. “I am pleased that we were able to work with our student loan servicers as well as other states to bring this initiative to the people of Connecticut.”

A list of participating private student loan servicers will be available on the Department of Banking’s website.

State officials announced Monday that more than 100,000 Connecticut households got a second round of food benefits under the Supplemental Nutrition Assistance Program (SNAP).

The benefits bolster SNAP benefits to the maximum level for households who otherwise would not qualify for that level of assistance. The relief is part of the federal “Families First Coronavirus Response Act,”  which was signed into law last month.

The Connecticut Artists Relief Grant Program will make $500 available to qualified artists who live in the state and can demonstrate a loss of income for creative work because of COVID-19.

Only 100 grants are eligible. State officials said awards will be randomly selected from a qualified pool of applicants.

Additionally, the Connecticut Artists Respond Grant Program will make money available to individual or collaborative artists who present art activities, classes, or other “creative experiences” online at no cost to the public. The grants will be $1,000 for an individual and $2,000 for a collaborative team.

Both programs will be managed through the Department of Economic and Community Development. Applications will be accepted through Monday, May 4.