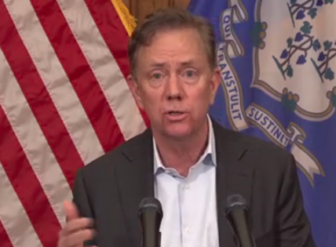 Lamont also hinted he is considering both a gasoline tax hike to bolster transportation funding and another round of state employee givebacks — though he later deflected questions about both subjects.

“The numbers are sobering,” Lamont said during a televised, mid-morning press conference one day after analysts projected state revenues would decline a staggering $7 billion between now and mid-2023.

“I’m sorry to ask everybody, but we’re going to have to do a little more on this fiscal front,” Lamont said, adding that while he hopes to receive additional federal relief, Connecticut must plan for the worst.

One of the first steps, according to the governor’s budget director Melissa McCaw, is to cancel about $100 million in previously approved tax cuts Connecticut no longer can afford.

“The goal is obviously not to do damage to our tax constituents at a time they’re trying to recover,” she said.

The administration would begin talks immediately with leaders of the legislature’s budget-writing panels, but McCaw offered one example that might be discussed.

A 10% surcharge on the corporation tax was supposed to expire after this year, saving businesses $23 million next fiscal year and about $60 million annually after that. This relief might be deferred, McCaw said.

Though the budget director didn’t cite other examples, additional tax relief due next fiscal year is mostly aimed at businesses and includes:

McCaw also said the administration would work with legislators to find at least $400 million in spending cuts next fiscal year. The goal is to hold a special legislative session in late June. 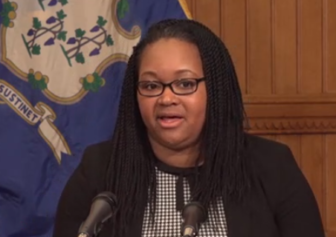 Melissa McCaw, the secretary of the Office of Policy and Management, speaking to reporters Friday.

Connecticut, which currently has about $2.5 billion in its rainy day fund, expects to have $1.8 billion-to-$1.9 billion left by July 1 after closing another deficit this fiscal year.

That remainder would then be used to cover the shortfall in 2020-21, she said.

But Lamont and the General Assembly have an even bigger task facing them next spring when they must craft a new, two-year budget to cover the 2021-22 and 2022-23 fiscal years. And Thursday’s forecast now projects that biennium can expect $4 billion less in revenue than originally anticipated.

Though Connecticut never has closed a gap that large in the past without a major state tax hike, governors and lawmakers also have turned to unionized employees for savings.

Is Lamont ready to ask unions for concessions?

“We’re going to have to streamline things, make some cuts [and] work in collaboration with our friends in labor,” Lamont said Friday.

When asked whether that meant reopening contracts, he said “No, I am going to sit down with our friends in labor.”

Absent layoffs, the only way to reduce labor costs substantially and quickly involves renegotiating wages and benefits fixed by contract. When asked how he could achieve savings without renegotiating contracts, Lamont responded: “Can I get back to you on that?”

The State Employees Bargaining Agent Coalition posted a notice on its website Friday confirming Lamont has requested “an informal meeting” to discuss the fiscal challenges caused by the pandemic. The coalition added that  leaders of the 16 unions in SEBAC “have agreed to meet in order to hear more.”

But if state employee unions maintain the position they’ve held for the past three years, the governor is likely to hit a roadblock.

After granting wage and benefit concessions in 2009, 2011 and 2017 — and also allowing Connecticut to restructure contributions to the workers’ pension in 2017 and 2019 — union leaders have said repeatedly their members are done giving. They remain open to talk about ways to make government more efficient, but officials now must raise income tax rates on Connecticut’s richest households.

For Lamont, a wealthy Greenwich businessman, that has been a non-starter. The governor, who fought hard in 2019 to kill a Democratic proposal to raise the income tax rate on top earners’ capital gains, has said this approach will drive millionaires to move out of state.

The governor also hinted at — but made no definitive statement — about raising fuel taxes to bolster Connecticut’s transportation program.

Thursday’s forecast called for the budget’s Special Transportation Fund, to become insolvent in the 2022-23 fiscal year — about three years earlier than administration officials anticipated before the COVID-19 pandemic. 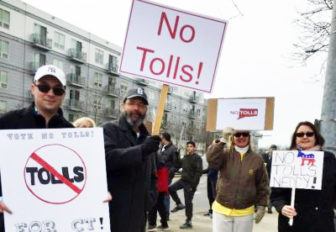 And given that Connecticut needs to ramp up transportation repairs immediately to preserve safety on its aging, overcrowded highways, bridges and rail lines. McCaw said the program could run into trouble as early as mid-2021.

Lamont, who spent much of his first 14 months in office trying to convince legislators — unsuccessfully — to order tolls, didn’t respond directly when asked if he would try a third time.

“I think I’m going to work in collaboration with the legislature to see what we can do about our Special Transportation Fund,” he said. “We’ve got a year to do it and we ought to do it right.”

Lamont noted some states are looking at gasoline tax increases “given the low price of gasoline” before he abruptly interrupted himself and dropped the subject. “Let me hear the ideas from the legislature.”

Connecticut already has two taxes on gasoline. A retail excise tax imposes a flat charge of 25 cents per gallon. A second tax adds 8.81% to the wholesale price when gasoline is delivered to local retailers, who’ve long acknowledged they then build the cost of that tax into the retail price charged to motorists.