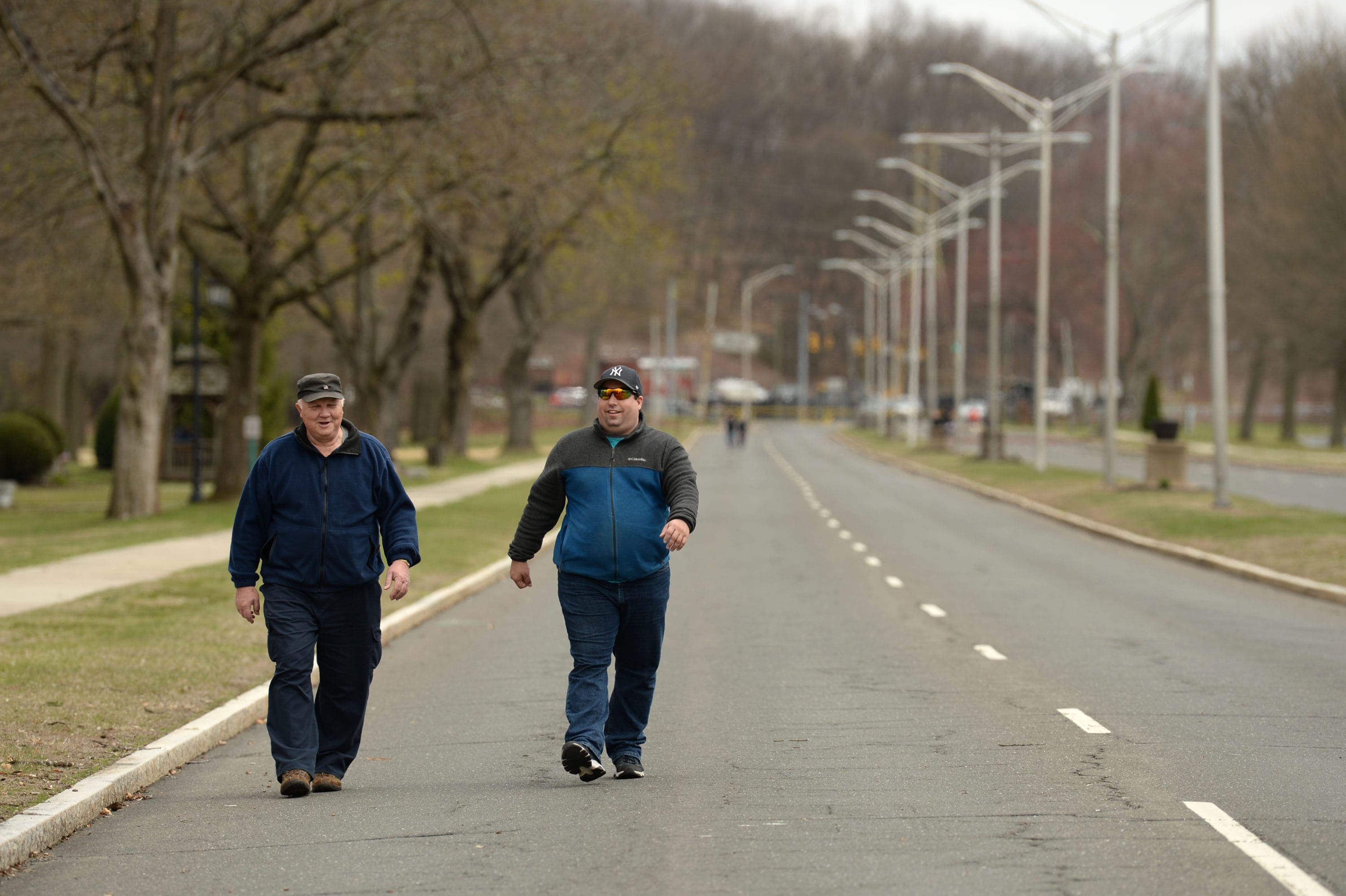 Two walkers enjoy strolling along car-free Memorial Boulevard in Bristol on a brisk April day. The city closed all city and school athletic fields and tracks, playgrounds and the skate park at Rockwell Park on April 1, due to the Covid-19 pandemic, but closed a quarter-mile stretch of the boulevard to car traffic “in order to create additional passive recreation space,” according to the town’s website.

It’s spring in the pandemic, and lots of people are outside enjoying what few public activities are allowed: walking, biking, jogging, pushing wheelchairs, riding scooters or skateboards. There are individuals, couples and a lot of family groups: often an adult on a big bike followed by children on small bikes, like ducklings on wheels.

While they move along, these folks are trying to keep socially distant from one another to avoid the possible drift of coronavirus.  So, many are hopping off the sidewalk and spreading into the streets.

Cities across the country, from Boston and Providence to Oakland and Seattle, have made it easier and safer for pandemic pedestrians by temporarily closing some streets to through traffic. This ad hoc movement, going on across the world as well, is known variously as Slow Streets, Open Streets or Healthy Streets. According to a database compiled by the firm Street Plans, there are nearly 300 such projects in more than 100 cities.

The idea has not caught on yet in Connecticut, however. A few streets in a few cities have been converted to public spaces, but that’s pretty much it.

Bill Young, board chair of the advocacy group Bike Walk CT, thinks the state is missing an opportunity. “I think that Slow Streets — however they best fit across Connecticut’s towns and cities — will broadly benefit us,” he said.

While it has a number of local variations, the basic idea behind Slow Streets is, as the name suggests, to reduce and slow car traffic on certain streets to make them safer and more appealing to walkers and wheelers. Using barriers and signs, some cities have blocked streets to all but emergency vehicles; others — more commonly — to all but residential, emergency and service vehicles.

Another variation has cities narrowing streets, say from four lanes to two, using cones or barrels to separate cars from people, and sometimes making them one-way. Taking outside traffic or parking lanes can be useful for expanded outdoor restaurant seating or queues for people waiting to get into shops or stores, or for creating express bus lanes.

Slow Streets is not to be confused with a similarly named effort called “Complete Streets.” This program, embraced by the state and many municipalities, involves permanent improvements such as curb bump-outs, speed humps or road redesigns to make streets safer and more accessible to walkers and bikers.

Slow Streets offer several benefits, as Young suggested. A big one is safety. Walkers and bikers are known in transportation-speak as “vulnerable users,” because they are vulnerable to being flattened by cars. Fewer cars lessens that risk. Constricted streets should also reduce speeding, which has almost become an epidemic of its own on many of the nation’s roadways.

Safer streets should induce more walkers and bikers to use them and gain the benefits of exercise and fresh air. Speaking of which, Young noted that slow streets lessen air pollution and noise.  And they add room for more social distance. 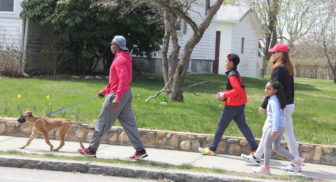 The Simonds-Dickinson family takes a noontime walk on Ocean Avenue in New London on a warm April day.

A few Connecticut communities have gotten with the slow streets program. Bristol was one of the first, closing a half-mile section of Memorial Boulevard to traffic on April 1.

New Haven and Hartford have closed streets in or around some city parks, to positive feedback. Southington and West Hartford are taking street space for restaurant seating expansion. Why not more?

One possibility is “steady habits” inertia. Also, with traffic volume down, some municipalities, particularly small rural towns, didn’t see the point. Conversely, many of the U.S. cities that have embraced slow streets are larger and denser than Connecticut’s municipalities and may have had a more urgent need for public space. But some smaller cities — Bend Ore., or Emeryville, Cal. for example — have slowed streets as well.

Perhaps a more compelling reason is that closing a street is trickier than it might appear.

“You can’t just close a street,” said Stamford spokesman Arthur Augustyn. “It’s complicated. It takes a lot of coordination, and you have to get it right.”

Sandra “Sandy” Fry, Hartford’s bike-and-pedestrian coordinator as well as a senior project manager in the planning department, said a town can’t wisely close a street if it will overburden a parallel street. Also, the effects on business must be weighed. “It’s usually easier to do it on residential streets,” she said.

One challenge when taking street space for restaurant seating is to still provide parking for takeout customers. West Hartford is constricting the streets in its popular town center and alternating outdoor seating with angle parking.

You can’t just close a street. It’s complicated. It takes a lot of coordination, and you have to get it right.”— Stamford spokesman Arthur Augustyn

The challenges of closing a street are well demonstrated by the Bristol closure of Memorial Boulevard. The reaction was mixed, said Mayor Ellen Zoppo-Sassu. She said the people who came down to stroll and ride bikes liked it, but some residents complained that it made their trip to work longer.

Well, the city needed to excavate a parallel street for a gas line repair, so Memorial Boulevard reopened to cars the last week in May. The gas project will take about six weeks, and Zoppo-Sassu said the town hasn’t decided whether to close the boulevard to cars again when the project is completed.

Also, the impetus for slow streets often comes from local advocates, and advocacy is stronger in some places than others. With most of its events canceled for this year, Bike-Walk CT recently furloughed its executive director.

Though Connecticut has been slow to embrace Slow Streets, there are other efforts to give walkers and bikers a bit more control of public thoroughfares.

The hugely popular rail-trail system is gradually being expanded. And the Complete Street movement has made some progress, with such projects as the on-street cycle track along New Haven’s Long Wharf Drive, curb bump-outs on Middletown’s Main Street and “road diets” — reducing the number of lanes — on some of the state’s older, pre-Interstate four-lane roadways.

Hartford is rethinking its somewhat barren Main Street, and is creating a bicycle boulevard/slow neighborhood street on Hampton Street in the city’s North End. This involves a series of traffic calming devices to make the street safe for walkers and bicyclists. The city, like some others, is slowly implementing a bike plan.

So even before the pandemic, activists and some officials were beginning to contest the decades-long notion that streets are only for cars. This is a challenge.

But if the pandemic and Slow Streets opens our collective eyes to the idea of streets that can also be safely used by walkers and bicyclists, Donegan sees multiple benefits, in community health and safety, recreation and transportation, particularly for urban communities where many folks don’t own cars but need to get to vital jobs. They may be the real vulnerable users.

Donegan would like to see more towns experiment with Slow Streets, driven by community engagement and paired with adequate enforcement.

Whether Slow Streets will survive the pandemic remains to be seen, but there is considerable sentiment for it. For example, scores of civic, neighborhood and environmental groups sent New York Mayor Bill de Blasio an open letter titled “Open Streets Could Save New York,” urging Hizzoner to expand the Open Streets program.

Also, the National Association of City Transportation Officials just produced a street design guide based on Slow Streets and other projects from around the world to help communities respond to, and recover from, the pandemic.

In the preface to the guide, Streets for Pandemic Response and Recovery, the authors note that even 10 years ago, reclaiming street space from cars to create walking and biking space was “a radical — even revolutionary — act.” Today around the world it’s a best practice, a “first-line response” to the pandemic.

“This is a historic moment when cities can change course,” it continues. “Creating safe, walkable streets and choices for getting around are critical during the initial crisis response, and also to achieving a long-term economic recovery that is equitable, sustainable, and enduring.”