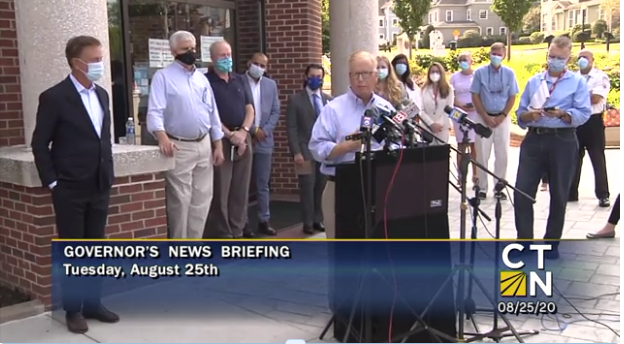 City leaders in Danbury, where coronavirus cases have ballooned in recent weeks, said on Tuesday that the increase is likely due to small family gatherings, in-person religious services, domestic and international travelers and interaction on athletics fields.

Danbury reported 44 new cases of coronavirus on Friday. It also saw a surge of 178 new cases from Aug. 2 to Aug. 20. Only 40 had been reported in the two weeks before that. Danbury’s overall positivity rate in recent weeks has hovered around 7%, significantly higher than the state’s overall rate, which has remained below 1%.

Danbury officials did not immediately have data available for the number of positive cases over the weekend and on Monday. Some of test results were still pending.

Mayor Mark Boughton said Tuesday that the city was closing its boat launches, and he asked residents to limit the size of family gatherings and to social distance during the visits. Danbury Public Schools announced on Monday that the upcoming school year will start out as distance learning until at least Oct. 1. Boughton said the schools may try a hybrid format of in-person and online instruction before shifting completely to in-person learning.

The city has also canceled – for now – its youth sports, including football and soccer leagues. And Western Connecticut State University, located in Danbury, announced on Saturday that students would have to wait 14 days before moving into residence halls.

“The steps that we are taking are measured, they’re reasonable and they’re rational,” Boughton said Tuesday. “And it’s because we’re concerned. We can pull back on them, and we certainly intend to pull back on them … But at the end of the day, we’ve got to make sure that our folks are healthy.”

Rep. David Arconti, a Democrat from Danbury, said the increase in cases appeared to be linked, at least in part, to the power outages earlier this month caused by Tropical Storm Isaias. Pockets of the city’s downtown were without power for seven days or more, he said, and residents went to friends’ or relatives’ homes to charge electronic devices, store food in the refrigerator and cool off with air conditioning.

“There is a noticeable uptick in infections within neighborhoods in parts of our city that were without power for the longest – areas of downtown in particular that were out of power for seven-plus days,” he said.

The city has been using heatmapping to track COVID-19 cases. From the start of the pandemic through July 1, “we saw pockets all around the city,” said Kara Prunty, Danbury’s acting director of public health. “But then, once we mapped our cases from July 1 through now, we can see that it’s very much all in our downtown area.”

Gov. Ned Lamont described the areas of downtown Danbury hardest hit by the outages as “congested.”

“A lot of the outages here were in neighborhoods that are congested, often multi-generational housing,” he said. “It’s people getting together to get that air conditioning. … I think Danbury was maybe hit a little disproportionately on that front.”

Arconti and Lamont said they would work with the state Department of Public Health to explore whether other Connecticut cities saw an uptick in COVID-19 cases due to the power outages. “This may be a canary in the coal mine,” Lamont said.

State officials have also ordered accelerated testing in Danbury’s nursing homes and assisted living facilities. The state suspended in Danbury a policy allowing nursing homes to stop the weekly testing of residents and staff if a building is coronavirus free for 14 days. Facilities in the city will have to test everyone on a weekly basis for the foreseeable future.

Prunty said Tuesday that one facility reported four new COVID-19 cases among staff and one case among its residents this week, though she declined to name the building.

City residents are encouraged to wear masks and continue social distancing. Officials also urged them to get tested and to pick up the phone when contact tracers call.

“We’ve had almost 1,000 people tested over the last few days,” Boughton said. “Danbury residents: Go out there; you don’t need to be symptomatic. It’s a free test, and that way we can find the levels of the spread and where it is.”