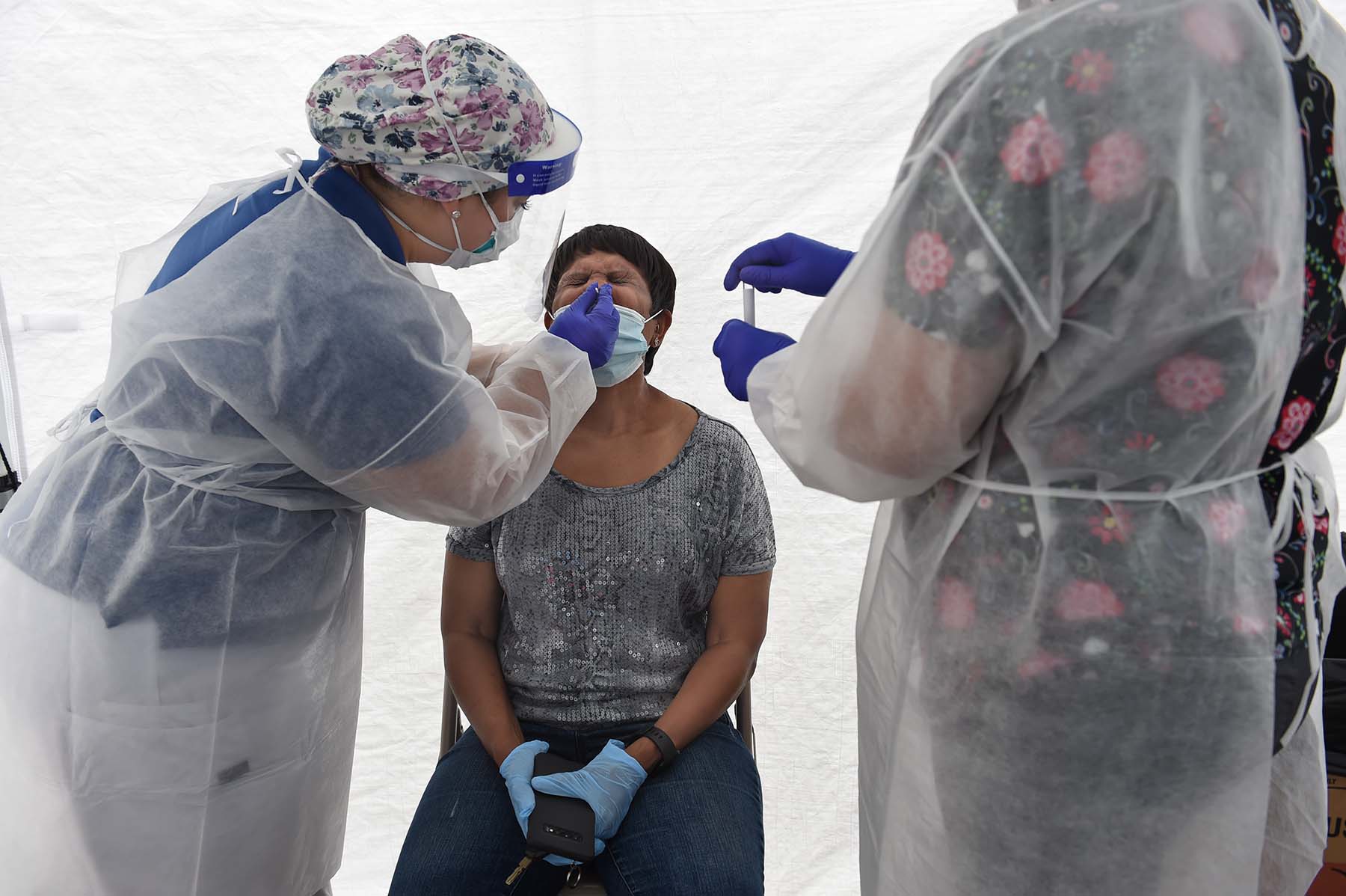 Teresa Webb, of Stratford, gets swabbed for COVID-19 by nurse Julyssa Colon at a mobile test site set up by Optimus Health Care in June.

The governor said Monday that he has suspended in Danbury a state policy allowing nursing homes to stop the weekly testing of residents and staff if a building is coronavirus-free for 14 days. Facilities in the city will have to test everyone on a weekly basis for the foreseeable future. Nursing homes and assisted living centers outside of Danbury are still permitted to stop testing if a building has been COVID-19 free for two weeks.

State data show no significant increases in resident cases or deaths in Danbury’s five nursing homes and two assisted living centers for the week of Aug. 12 to 18, the most recent figures available. A spokesman for Lamont said officials are being “proactive.”

Danbury reported 44 new cases of coronavirus on Friday. It also saw a surge of 178 new cases from Aug. 2 to Aug. 20. Only 40 had been reported in the two weeks before that.

Western Connecticut State University, located in the city, announced on Saturday that students would not be allowed to return to university residence halls for two weeks. Any students who had already moved into the campus housing must remain there. Classes are expected to begin in an online-only format on Aug. 26.

And Danbury Public School officials said Monday that the upcoming school year will start out as distance learning until at least Oct. 1. City health officials have canceled organized youth sports for the fall, including soccer and football leagues, but not high school sports.

School districts in nearby towns are expected to start school as usual. Lamont said neighboring communities so far have not seen spikes in cases.

State and local leaders are encouraging Danbury residents to get tested for coronavirus. The positivity rate for COVID-19 in the city is about 7%, Lamont said, while the rest of the state is less than 1%. The governor’s spokesman said officials are looking into the possibility of additional pop-up testing sites.

Lamont on Monday attributed the increase to people coming in from out of the country. Danbury is on the border with New York and sees out-of-state and international visitors.

“A lot of it is perhaps related to populations that come in from out of the country, maybe visiting folks at home,” he said. “So we have to be able to address each and every one of these special populations – tell them the importance of quarantining and the importance of testing. And with that, you have to find somebody who can speak the native language in order to talk to these people.”

Out-of-state visitors are required to quarantine for 14 days in Connecticut. Danbury Mayor Mark Boughton could not be reached for comment.

Statewide, there were no new COVID-19 deaths over the last three days. Connecticut recorded 492 additional coronavirus cases since Friday, and three new hospitalizations.

“That is just prayerfully good news,” Lamont said. “But look, we’re not out of the woods.”