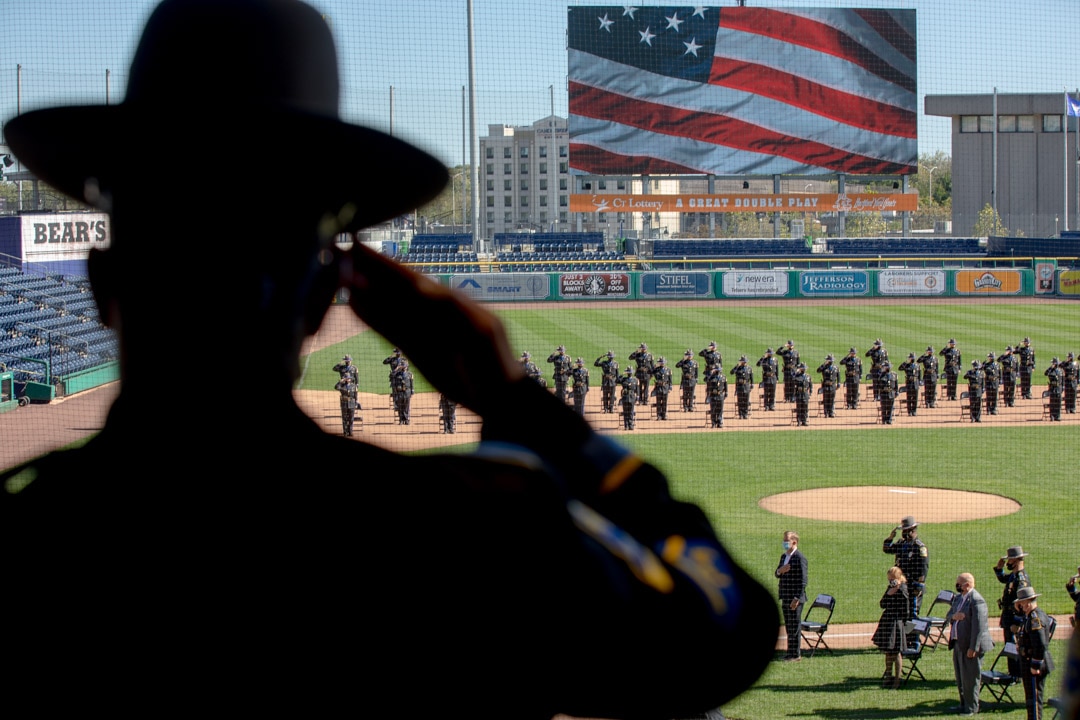 A salute as the national anthem is played during the Connecticut State Police graduation ceremony in October.

Four months after the Criminal Justice Commission deadlocked on whom to appoint as the state’s first inspector general, the Police Transparency and Accountability Task Force has recommended changing the law so the special prosecutor does not need to be chosen from among Connecticut’s existing pool of state’s attorneys.

The inspector general will be tasked with investigating deaths in police and Department of Correction custody and determining whether to pursue criminal convictions. Coupled with a statutory change narrowing the circumstances in which cops can use deadly force, these provisions of the bill are intended to shake up the status quo and hold police accountable for violent misconduct. Lawmakers created the position in a bill passed during a special legislative session last summer.

The Judiciary Committee will consider the task force’s recommendations in the 2021 session, said Sen. Gary Winfield, the committee’s co-chair, but it will not relitigate the entire bill.

“We’re going to try to do as narrow a piece of policy as possible,” said Winfield, D-New Haven. “We’re looking to make sure we have a policy that works, that’s right, but we are not looking to open this whole thing up for discussion again, at least not right now.”

The Police Transparency and Accountability Task Force began meeting in January 2020, but its work took on even more prominence in the wake of the police killing of George Floyd in May. The task force is charged with examining a slew of issues, including police interactions with people who have mental, physical or intellectual disabilities, what circumstances should lead to the revocation of a police officer’s certification by the Police Officer Standards and Training Council (POST), and how to reduce racial disparities in traffic stops and searches through the establishment of primary and secondary traffic violations.

The task force sent lawmakers an 11-page document Wednesday outlining both its recommendations and the proposals on which task force members failed to agree.

The task force ultimately endorsed four recommendations to send to lawmakers for the 2021 session. The first recommendation, on the inspector general, said the current law constricts the applicant pool, precluding officials from considering a “larger pool of well-qualified candidates” like federal prosecutors, private lawyers or civil rights attorneys. Broadening the applicants beyond employees of the Division of Criminal Justice would also “avoid the appearance of a conflict of interest,” the report notes, which existing prosecutors could face since they regularly work with police while investigating and prosecuting cases.

Other proposals include removing the requirement that all law enforcement agencies be required to obtain and maintain CALEA (Commission on Accreditation for Law Enforcement Agencies) certification; allowing POST to recommend the state withhold funds from police departments that fail to comply with mandated reporting of certain instances of police misconduct; and requiring POST to develop a mandatory minimum in-service training on interacting with members of disability communities, a curriculum developed with input from experts and members of those communities.

Police interactions with people in emotional distress and on the autism spectrum came up repeatedly in the task force’s listening sessions in the fall. The document explaining the task force’s recommendations acknowledges that POST provides training on police interactions with people with disabilities during recruit training, but developing a minimum in-service training, “with input from the disability community, would ensure that all officers receive ongoing training throughout their careers.”

The Task Force also endorsed an assessment from the Insurance Law Center at UConn Law School that found the much-discussed modifying of qualified immunity — a legal defense available to police officers if they have been accused in a civil lawsuit of violating a person’s constitutional rights — would likely not have a fiscal impact on cities and towns. Over the summer, critics of the bill argued police would go broke paying out damages and municipal spending would skyrocket to cover the costs of insurance.

Also included in the document sent to lawmakers were two proposals for holding police accountable for misconduct that failed to get unanimous approval from task force members. Neither proposal received support from law enforcement members on the task force, said Daryl McGraw, the chair.

The first would have increased the statute of limitations from one to three years for filing a lawsuit against an officer who violated a person’s civil rights. The other would have mandated POST to automatically decertify police officers when they’re convicted of a felony or drug possession charge.

“The law enforcement officials on our task force felt that this would take away somehow from their due process,” McGraw said. “At the end of the day, if an officer gets a felony, he is going to be decertified because he will not be able to carry a gun. Some of the officers thoughts this was moot, but still, they all voted against it.”

However, McGraw said, there are loopholes. If an officer is given “accelerated rehabilitation,” a special form of probation, then they could avoid having a conviction on their record, meaning they could avoid being decertified.

McGraw said he hopes he can count on the cops on the panel to join him in pushing for due process for all Connecticut residents, not just police officers.

“In my continued fight for criminal justice reform, I’m hoping I can get the same support on advocating for due process for regular people, as well,”  he said.

Absent from the recommendations were changes to police use of force. The Hartford Police Union has claimed the narrower use of force language from the new law has made police hesitant in dangerous situations.

McGraw said the task force has until the end of the year to issue its final set of recommendations. They will have more upcoming listening sessions for both youth and the general public.

“My goal is to focus the rest of our time together on issues of use of force,” McGraw said. “The work isn’t done yet.”