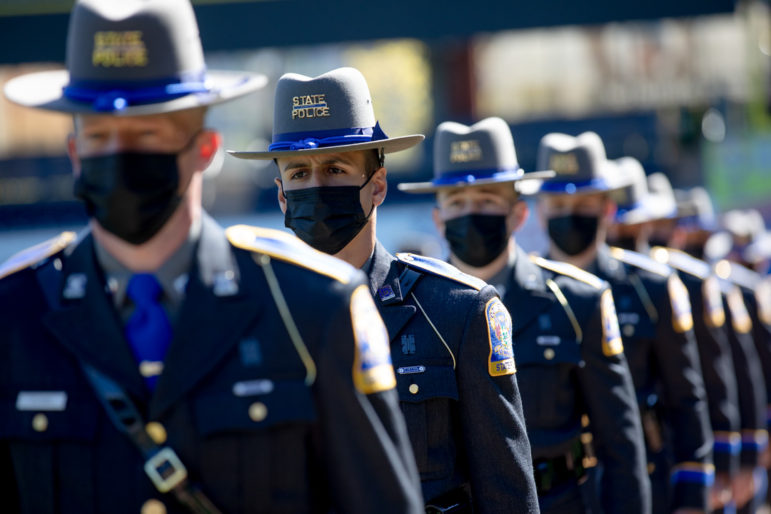 Troopers lined up in formation as they walked onto the field.

Gov. Ned Lamont appointed 11 members to the Police Officer Standards and Training Council on Thursday, reconstituting a board that oversees the training and decertification of cops across Connecticut.

The appointments are a requirement of the police accountability bill passed over the summer in a special session. The new law gives POST the authority to decertify a police officer — revoking a necessary credential for employment — if they use excessive physical force or if they do something that “undermines public confidence in law enforcement.”

“The POST Council performs the critical task of holding all police officers and departments in Connecticut to the highest standards of public service,” Lamont said in a statement. “I am grateful to the outgoing council members for their years of important service to the state, and grateful to those who have volunteered to serve today. I am confident they will continue the important and complementary work of equipping officers for success, ensuring individual and community safety, and ending systemic discrimination in our criminal justice system.”

There are 19 members of POST in total, several of whom will be appointed by members of the legislature.

“The law enforcement landscape has changed, presenting many new directions and challenges for the POST Council,” Emergency Services and Public Protection Commissioner James Rovella said in a statement. “This refreshed group of appointees represents many new respected experts, leaders, and broad perspectives. We look forward to cooperatively addressing the many law enforcement issues that will ultimately make our state a safer place for all.”

Between the ever-present, and publicly growing, demand for accountability of police officers, and anticipated funding made available by the Biden administration, Lawlor said, “this is a very important moment for law enforcement … It’s the perfect time to be involved in this type of work for people who are dedicated to improving the criminal justice system.”

Lawlor said the work is a continuation of his last job in state government, for the Malloy administration. He said the goal there was threefold: reduce crime, reduce spending and restore confidence in the criminal justice system, among racial and ethnic minorities, victims of crime, and the general public.

“If you can improve confidence in the system, the result is less crime,” said Lawlor.