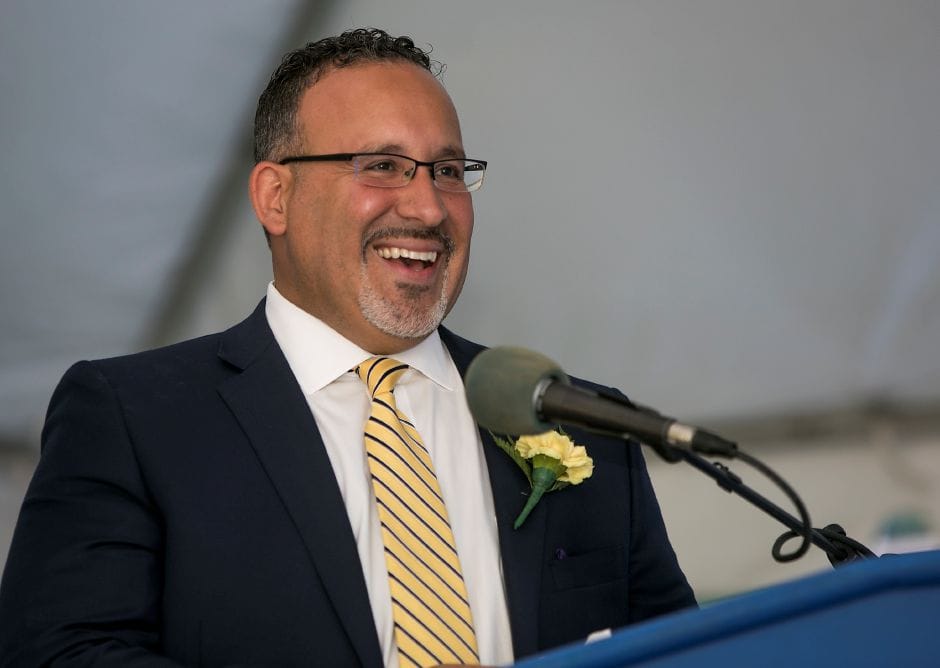 Miguel Cardona speaks during the 2018 graduation ceremonies at Wilcox Technical School 15 years after he graduated from the school.

The U.S. Senate voted 64-33 Monday to confirm Connecticut’s Miguel Cardona as the U.S. Secretary of Education.

“Miguel Cardona is a man of deep commitment to his community and, with pride, a product of the Connecticut education system,” U.S. Sen. Richard Blumenthal said before the vote. “I couldn’t be prouder to support him, because President [Joe] Biden couldn’t have made a better choice to be the next Secretary of Education.”

“He brought together students and parents, administrators, teachers, teachers’ unions to come up with a plan to safely reopen our schools, and Connecticut reopened our schools, faster than many people thought that we could,” U.S. Sen. Chris Murphy said before the vote. “Ahead of the curve, nationally. He was able to do that because consensus-building is a skill that Miguel Cardona has been working at for a very long time.”

Gov. Ned Lamont sent his congratulations to Cardona Monday night, saying that his confirmation is “an incredible moment for Connecticut.”

“I’m feeling bittersweet emotions today knowing that our administration is saying farewell to someone who has been a wonderful commissioner, but we’re also gaining ally on the national stage,” Lamont said.

Cardona began his career in education as an elementary school teacher in his hometown of Meriden. From there, he moved his way up to become Connecticut’s youngest principal, an assistant superintendent and the state’s first Latino education commissioner right before the pandemic shut down schools nearly a year ago.

During his Senate confirmation hearing on Feb. 3, several Republicans pressed Cardona on whether he agrees with transgender females participating in women’s sports, others questioned where he stands on requiring standardized testing this spring and Democrats urged Cardona to work on canceling student debt immediately.

But one thing both parties agreed on during the hearing was getting schools reopened for in-person learning, which is one of President Biden’s top priorities and an issue Cardona has tackled during his time as Connecticut’s education commissioner.

“At this moment of crisis, Dr. Cardona is exactly the leader we need at the Department of Education to tackle these challenges,” Sen. Patty Murray, D-Washington, said on Monday, adding that Cardona understood how critical this role as secretary of education is during his confirmation hearing. “Dr. Cardona will come to the department as a proven leader who will work with students, parents, caregivers educators school administrators and state, local, and tribal officials.”

In Connecticut, Cardona has repeatedly encouraged all the state’s K-12 schools to reopen this academic year but ultimately left the decision up to district leaders and local health departments. The state Department of Education has issued guidance over the last several months for districts to follow so they can open their doors and used federal pandemic aid to buy masks, plexiglass, and other protective equipment schools need to open safely.

The administration has also allocated federal funds to purchase laptops and internet access so that every student has the ability to learn from home and offer academic recovery resources like extended school days and summer school programs.

“That’s the vision — resolve and initiative are all going to help us contain this pandemic and reopen our schools safely and build back better. As a standard of care, it comes from having taught in a classroom, that comes from a hard working family who found their way in America through public education. It comes from someone who knows from his core that our nation’s children are the kite strings that lift our national ambitions aloft. He’s the secretary of education for this moment,” Biden said about Cardona and his approach in Connecticut during an announcement about his nomination in December.