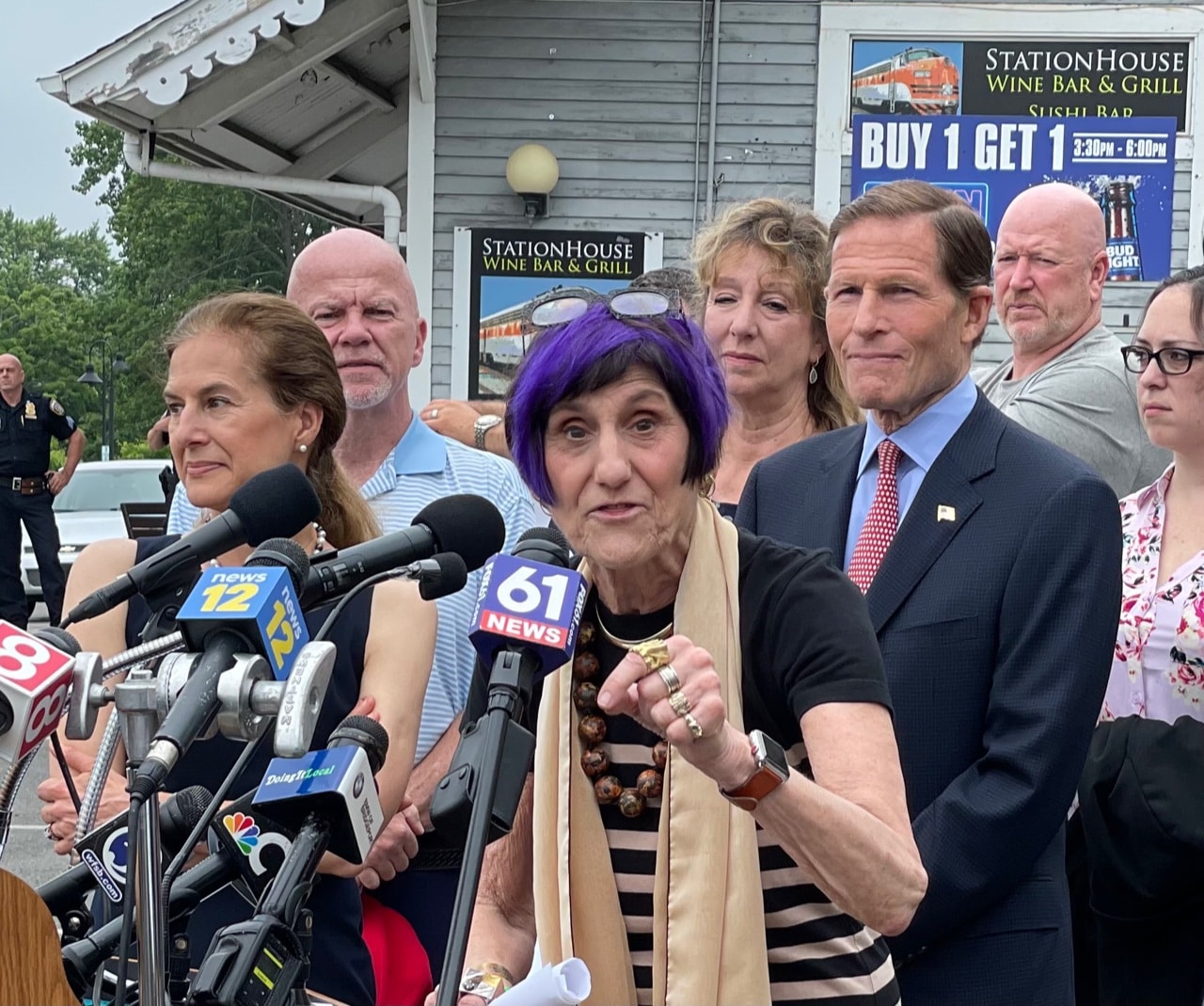 STRATFORD — The president of Metro-North made the trip from New York to hear about Connecticut’s latest vision for faster rail. The vice president of Amtrak came from Washington. The governor was the host. But the draw was the “fairy godmother of federal funding.”

That is how Lt. Gov. Susan Bysiewicz introduced U.S. Rep. Rosa DeLauro, D-3rd District, a twice-a-week Amtrak rider who is the chair of the House Appropriations Committee at a time when America is poised to spend billions on rail infrastructure.

“This is a once-in-a-generation investment. It’s now time. We can’t go back. We don’t go back,” DeLauro said Monday, pausing only to let a Metro-North commuter train pass behind her. “Let’s look at this moment as the opportunity to build the architecture for the future.”

The occasion was the announcement of Time for CT, a mix of goals and promises for $8 billion to $10 billion in improvements to the busiest and pokiest commuter rail corridor in America, where 21st-century trains, often limited to 30 miles per hour, cross 19th-century bridges.

The plan promises to shorten the New Haven to Grand Central ride by 10 minutes next year and by 25 minutes by 2035.

The administration of Gov. Ned Lamont rounded up the usual suspects. Construction trades union members, all veterans of the governor’s last campaign to speed commutes on rail and highway, dutifully arrived with a banner that promised “JOBS.”

Don Shubert, president of the Connecticut Construction Industries Association, stood in the small audience gathered in a semi-circle at the Stratford train station, hoping Time for CT would fare better than CT2030, a plan that relied on a failed push for highway tolls in 2019.

“It would be nice to see Connecticut shift from studies to actual implementation as quickly as possible to get some people to work,” Shubert said.

Lamont was well aware of the cynicism attendant with long-range plans for infrastructure improvements — and the unpopularity of new broad-based funding sources.

“The world is littered with 30-year plans,” Lamont said.

While CT2030 called for spending $21 billion on highways and rail infrastructure, Time for CT is tightly focused on the New Haven Line that takes 130,000 commuters to Grand Central and back on weekdays, or at least it did before the COVID-19 pandemic.

It puts a bow on smaller investments that are about to pay dividends — modern signalization, catenary power lines that no longer droop in heat waves, safety measures like positive train control, and sidings that removed bottlenecks — and repackages them as part of Time for CT.

Lamont now sees the virtues of mixing small, immediate improvements with long-range planning. He said he made that clear to Giulietti when the former regional rail executive outlined a plan for faster commuter rail service.

Time for CT is in quiet competition with North Atlantic Rail, a concept for a new rail entity that would construct high-speed rail service throughout New England, connecting Hartford to Providence and Connecticut to Long Island with a tunnel under the Sound.

Co-chaired by Hartford Mayor Luke Bronin, the conceptual plan is neither supported nor opposed by the Lamont administration, which wants to offer the Biden Administration a list of projects that are either shovel-ready or ripe for final plans and construction.

Bronin praised the Time for CT plan as consistent with North Atlantic, whose early goals are similar to what Lamont outlined.

“This study lines up perfectly with the North Atlantic Rail initiative, which identifies improvements on the New Haven Line as a critical early action priority — and aims to build a broad, regional coalition to help secure the funding necessary to get these projects done," he said.

The attendees at the news conference in Stratford evinced little appetite for high-concept.

“It is realistic. It's rooted in reality. It's doable. That's one of its great strengths,” Blumenthal said.

Funding was a topic largely glossed over, other than noting that the federal government is expected to launch new grant programs for rail spending as soon as Congress settles on the scope of appropriations.

Votes in Congress are expected before the end of the month. Other than imposing a new mileage fees on heavy  trucks, Connecticut took no steps this year to increase funding for transportation.

State Rep. Roland Lemar, D-New Haven, co-chair of the Transportation Committee, said Time for CT capitalizes on past investments and makes a case for new ones.

“We have been making investments over the last couple of years. It's all been couched as sort of incremental, necessary pieces of a big picture,” Lemar said. “Now's the moment the big picture can actually be realized. Everything 'til now has been like, ‘How do we keep it running? How do we make it a little bit better?’”

With highway tolls off the table, Connecticut is relying heavily on its “fairy godmother” and the commitment of a new president to infrastructure spending.

“We have Rosa DeLauro right now in a position where she can deliver what she wants to deliver,” Lemar said. “She's never missed an opportunity to deliver.”

Blumenthal said Metro-North and Amtrak need to show improvements quickly to recover from the pandemic.

Jim Gildea, the chair of the Connecticut Commuter Council, said the need to speed up trains that are slower than in the 1970s, largely due to speed limits imposed on substandard tracks and bridges, is vital. He commutes on the Waterbury Line and New Haven Line.

"I feel like I speak with real credibility when I tell you that other than safety, the single most important thing to the everyday commuter is spending less time on the train," he said. "Simply put, we do not want to be on the train more than we need to. We want to leave our houses later. We want to get home to our families quicker."

Caroline Decker, the Amtrak vice president for the northeast corridor, said political muscle from DeLauro and others would be necessary to address an exhaustive list of overdue improvements in the corridor from Washington D.C. to Boston.

“It really is a moment,” she said.

Catherine Rinaldi, the president of Metro-North, said faster service would be another inducement for commuters to return. Ridership nearly disappeared during the pandemic, and it has been slow to come back.

“We're between 36% and 40% back. We’ve been coming back about 5% per week since the spring,” Rinaldi said. Weekend traffic is 65% of previous levels.

Rinaldi said the new normal for the commuter rail line probably won’t be clear until after Labor Day, when most major employers are expecting a return to the office for employees, though remote work is expected to be a significant component of employment.

Metro-North has increased service, and it will be surveying riders and employers to gauge what must be offered in the fall.